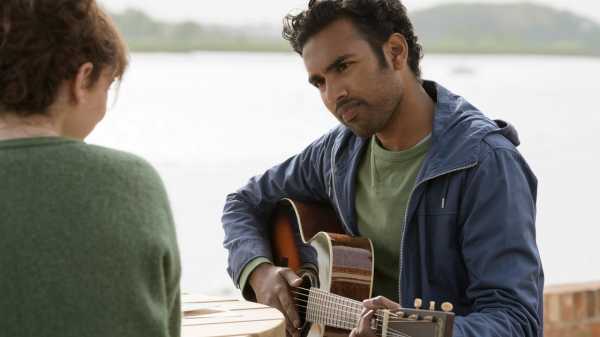 Danny Boyle’s comedic fantasy “Yesterday,” from a script by Richard Curtis, is a high-concept film in the best possible way: its idea has such symbolic power that it renders the details of the action and the direction not quite superfluous but secondary. Which is to say, it’s the kind of film that, in its elevator-pitch version—a singer-songwriter awakens from an accident to discover that he’s the only person in the world who knows the Beatles and their songs—packs enough implications to seem like an ample experience in advance.

The musician, Jack Malik (Himesh Patel), a man in his late twenties, is of South Asian descent. He lives with his parents (Meera Syal and Sanjeev Bhaskar) in their modest family home in Suffolk, England; he formerly worked as a schoolteacher but gave up that full-time job to pursue a career in music. Now he lurches between low-paying and poorly attended solo gigs and takes a part-time job as a discount-store stock clerk. His manager, Ellie Appleton (Lily James), his lifelong friend, is currently a full-time math teacher who also works indefatigably to get him gigs (and drives him to and from them, since he has no license) while expressing confidence that he’ll ultimately be a musical success.

But, after yet another humiliating performance to a venue of empty seats, Jack decides to give up. He bicycles home at night, is distracted by a sudden blackout (it’s worldwide, and lasts twelve seconds), gets hit by a bus, wakes up in a hospital bed, bruised and bloodied—and, in the course of his recovery, finds that even his closest friends don’t get any of his Beatles references. Google kicks his “Beatles” search to “beetles,” and, when he sings one of the band’s songs for his friends, they enthuse about his songwriting, which gives him the idea to transcribe them from memory (since, of course, their albums have vanished from his collection) and perform them as his own.

Jack becomes a local success, and is interviewed on local television; Ed Sheeran (playing himself) happens to catch the show and invites Jack to open for him. Onstage for Ed’s Moscow concert, Jack becomes an instant sensation with “Back in the U.S.S.R.”; backstage, Ed defers to the newcomer, calling himself the Salieri to Jack’s Mozart. Then a Mephistophelian manager, Debra Hammer (Kate McKinnon), lures him to Los Angeles and takes control of his career with promises of wealth and stardom—and she quickly makes it happen, with a well-orchestrated series of moves ranging from recording sessions (Ed encourages him to turn “Hey, Jude” into “Hey, Dude”) to marketing meetings and online track drops and a concert for the album release. Yet the eternal devilry of romance gets in the way, and Jack, forced by circumstances to face the fraudulence of his fame, is, unsurprisingly, led to embrace the authenticity of love.

“Yesterday” is ultimately a romantic comedy, but a conceptually complex one, built on a peculiarly reactionary framework of private life and a culturally conservative pop classicism. The action begins with Ellie doing two jobs so that Jack can, essentially, do none—she steadfastly supports the artist in his creative, if unlucrative, endeavors. (Whatever her manager’s percentage of his earnings may be, it wouldn’t even pay for gasoline.) Yet, as a manager, Ellie isn’t given a chance to say much about the course of Jack’s career; she’s more of a factotum than a guide, and she doesn’t offer any suggestions as to what he might do to improve his work (which she enthuses about unconditionally) or his chances.

Hapless Jack is a virtual adult child, living with his parents, having no sex life or romantic relationship, unable to support himself (or, rather, unwilling to do so—his job as a teacher would have sufficed, as does Ellie’s), and the catalyst to his independence is his total dependence upon the work of others. What’s more, it’s only when he becomes rich and famous that he’s even able to consider his emotional life and the lives of others in his midst with any honesty and clarity. As a story about the deforming torment of failure and the liberating energy of success, “Yesterday” is radically immodest, brazen in its celebration of Jack’s acclaim on the (invisible) shoulders of giants and on the industry-standard marketing vulgarity and image manipulation on which that success depends. The movie is more than a celebration of a particular strain of musical history; it’s a celebration of back catalogue, of the genius of the system at large—and of the power of that system to create mighty classics that win mass adulation (indeed, to do so twice over).

Yet “Yesterday” doesn’t at all address the question of what, besides the songs themselves, would be missing if the Beatles’ music were erased. The movie could have had bold fun imagining what wouldn’t have happened had the Beatles not existed and all that might have happened instead—whether the resulting relative poverty and stuntedness of the current musical scene or the blooming of other, currently overshadowed musical varieties—but Boyle and Curtis don’t seem willing to go out on such an extreme limb of fantasy, let alone historical analysis and critical imagination.

Nonetheless, what’s fascinating about the movie—and what stays in mind long after its soft-soap particulars and flimsy dramatics fade from view—is the notion of artists as archeologists, archivists, curators, and impresarios of lost or obscured historical treasures. No less than a movie by Quentin Tarantino, with its plethora of references flattering the knowledge and the tastes of critics, “Yesterday” is a movie built to gratify critics by praising what they can do: fight against cultural oblivion. The movie crystallizes the feeling that an obscure or forgotten body of work is the most important art in the world, and that it’s one’s personal mission to bring it the attention and the love that it deserves. Those who can’t do, curate.

The fear of cultural loss and the urge for restoration have unleashed huge conceptual swings on the part of other filmmakers of different talents and interests. In Michel Gondry’s “Be Kind Rewind,” from 2008, the concept of “sweded” movies—homemade versions of Hollywood films made by two video-store employees to replace an archive of erased tapes—is grander, giddier, and more enduring than any of the film’s dramatic specifics. The idea also inspired the greatest movie ever made, Jean-Luc Godard’s “King Lear,” a fantasy from 1987 in which the world’s great art has been lost as a result of Chernobyl. In an era when physical media are being supplanted by streaming, the prevalence of rock docs and anniversary celebrations evokes the sense of impending disaster and the shoring up of fragments against ruins. “Yesterday” is also a story of the failures of the system—a literal failure of the global grid that results in a colossal blank of cultural memory. Beneath its comedy, “Yesterday” is a horror film about a real-time disaster in the making.

Situation at the Scene of Deadly Knife Attack in Parisian Suburb...

India to Accept Donations from Abroad Amid COVID-19 Outbreak for PM...

Democrats have been discussing the same ideas on guns for 25...