Home Culture “Younger” Is “Gossip Girl” for the Publishing Industry | 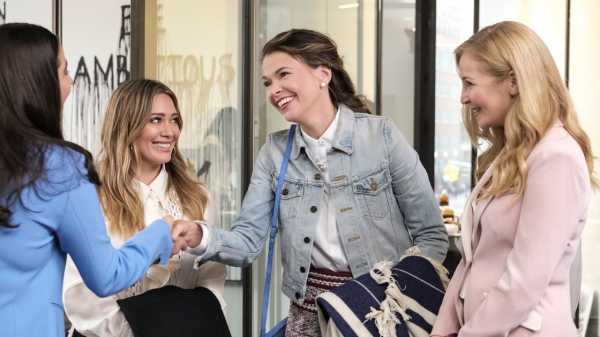 At first, the TV show “Younger,” which premièred in 2015, seemed like it was going to be a Funfetti cake full of millennial jokes. It centers on the forty-year-old Liza Miller, a former publishing assistant who moved to the suburbs, got divorced, and moved back to Brooklyn. When she tries to rejoin the publishing industry, no one will hire her—until she gets the idea to pretend she’s twenty-six. Early in the series, the gags were predictable: one episode hinged on Liza’s shock that it was now de rigueur to remove one’s pubic hair. But the heart of the show turned out not to be the age theatrics, or the romantic story line, or Darren Star’s tour-bus-ready New York; rather, it was the comparatively mundane stuff of book contracts and office gossip. Over four seasons, “Younger” became a “Gossip Girl” for the publishing industry—a glossy, winking take on a bounded universe of writers and editors and marketing campaigns.

Liza Miller is played by Sutton Foster, the Broadway actress whose television breakout was the short-lived cult show “Bunheads.” Foster is a persuasive, joyful actress—bright and sensitive, with a tinge of improbable musical-theatre pluck. On “Bunheads,” she played a not-getting-any-younger showgirl who, like Liza, needed to abruptly start over; she started teaching ballet in a small town in California and soon became an essential part of the community. On “Younger,” similarly, Liza makes herself irreplaceable at the fictional publishing house Empirical. It’s run by a craggy, soulful publishing scion named Charles (Peter Hermann) and an uptight marketing director named Diana (Miriam Shor). Hilary Duff plays the blissfully conventional twentysomething Kelsey Peters, who—improbably—runs her own imprint, called Millennial. Empirical does business in a recognizable world: Kelsey goes to the PEN Awards; authors check Goodreads; the editors bid against Scribner and Little, Brown. “Younger” has name-checked Michiko Kakutani, New York’s Approval Matrix, the 92nd Street Y, and the Times’ “By the Book” column. In Season 3, Kelsey has a brief fling with a terrible guy named Colin who writes for Page-Turner. Jennifer Weiner and Erica Jong have appeared as themselves.

The show is also studded with fun-house-mirror versions of literary characters. Jane Krakowski played a Candace Bushnell type named Annabel Bancroft, whose books include “Man-hattan” and “Goldman Sex.” John Green is renamed Rob Olive, who publishes a book wonderfully titled “#I’m Dying.” Cat Marnell is turned into Jade Winslow, a hard-partying fashion blogger who pitches her industry tell-all as “The Devil Wears Prada” on amphetamines. Marie Kondo becomes Kiko Kagami, a terrifyingly neat woman who believes that all objects have spirits that we must set free. Funniest of all is the George R. R. Martin figure, whose name on the show is Edward L. L. Moore. A hobbit-like cash cow, Moore writes the “Crown of Kings” series; in Season 3, it’s revealed that he’s been writing erotica under the pseudonym Aubrey Alexis. In the first episode of Season 5, which premièred at the beginning of June, Moore is busted for being a serial sexual harasser, and Empirical pulls his highly anticipated book.

Alongside the parodies and the name-checks, there are some flights of telegenic fancy. Diana, Kelsey, and Liza wear head-to-toe designer outfits. A story arc is built around the imaginary Hamptons Book Fair, which mostly consists of picturesque day-drinking. In one episode, Kelsey and Liza take a business meeting at a hotel pool. (The meeting is for the Page-Turner writer, who tricks Kelsey into starting a bidding war for his novel; it’s a step up from her first-season affair, with the show’s Karl Ove Knausgaard, a pretentious Swede named Anton Bjornberg.) Empirical plans a Joyce Carol Oates publicity campaign around topless selfies and the hashtag #ShowUsYourOates. The long time lines of publishing are compressed into whirlwind subplots, and there are no agents on the scene except for a guy named Redmond, who seemingly represents every author in New York City and routinely crops up whenever there’s drama to be caused.

But the line between “Younger” and the actual publishing industry feels pleasurably blurry—and it dissolved further with the recent real-life publication of “Marriage Vacation,” a book that’s become a major plot point on the show. On “Younger,” Liza acquires “Marriage Vacation” after meeting a woman named Pauline Turner (Jennifer Westfeldt), who pitches her a “Heartburn”-esque novel based on her own life. Pauline explains that she’s a writer who became an Upper West Side mom and lost her identity; she had to abandon her family in order to find herself again. It turns out that the husband she left was Charles, the head of Empirical, whom Liza happens to be in love with. (He’s in love with her, too, but has mostly hesitated to express this, as Liza is still pretending to be in her twenties.) Liza passes the manuscript around the Empirical office, and soon everyone’s in a tizzy: on page 58, there’s a highly graphic sex scene about their boss.

“Marriage Vacation” was published earlier this month, by Simon & Schuster—though Millennial’s colophon appears on the spine, too. Pauline Turner Brooks is listed as the author, though the book was actually written by Jo Piazza. Page 58 is indeed spicy: it’s a detailed flashback to Pauline and Charles—here known as Kate and Karl—having sex in a public park. Kate, at this point in the novel, has already embarked on her year-long marriage vacation, prompted by a quick series of events: one of Karl’s authors gropes her at a book party; Karl bails on a trip they had planned, to a wedding where all of Kate’s former classmates from the Columbia M.F.A. will be in attendance; Kate accidentally eats MDMA at the reception and decides she could still be a writer, after all. She surveys her life—a ten-million-dollar town house, a live-in nanny, two daughters—and deems it stultifying; she wonders how she’ll ever get the time to write. “We renovated our town house, then the place in Connecticut, then the place in East Hampton,” she explains. “I know full well how it sounded to say that overseeing the renovations on three properties became a full-time job, one I didn’t even particularly enjoy, but it was the truth.” And so with her molly hangover turning into a midlife crisis, Kate decides to go to Thailand and get in touch with her self-worth.

In other words, it’s a cross between “Eat, Pray, Love” and “Primates of Park Avenue,” a warmhearted and eminently hate-readable confection that I’d take on an airplane even if I didn’t watch the show. But within the universe of “Younger,” the book is the literary event of the season. After her book party, Pauline walks starry-eyed up the stairs of her town house, marvelling, “David Remnick thinks my prose is sinewy! I mean—sinewy!” There are Easter eggs, too, embedded within the pages of the novel. Pauline puts Kelsey in the book as “Kasey, a rising star at Paradigm in her twenties … I often wondered why she bothered to wear a skirt at all when the slightest shift of her thighs offered the entire room a glimpse of her labia.” She writes that Liza—who’s in the book as Lena—sounds like she’s on the old side when they talk on the phone.

The novel ends in a fantasy sequence, skipping a year ahead of the “real life” time line of Pauline and Charles. In the epilogue, Kate and Karl are staying at the Ritz-Carlton Maui, promising each other that they’ll be more considerate and honest, that they’ll remember to have adventurous sex more often. “If I learned anything from my year away, it’s that we all have to fight for our happiness,” Pauline writes. “And that we all deserve a second chance, no matter what it takes to get there.” This is wishful thinking: on “Younger,” Pauline and Charles are still sleeping in separate rooms. Plus, in the second episode of the current season, which aired this week, Charles finally finds out Liza’s secret—that she’s been lying to him, but also, perhaps, that she’s an age-appropriate love interest. Will he leave his wife for her editor? This is good gossip, whether it’s real or not.

What Donald Trump needs to do to fix America’s infrastructure

“They Shall Not Grow Old,” Reviewed: The Indelible Voices in Peter...