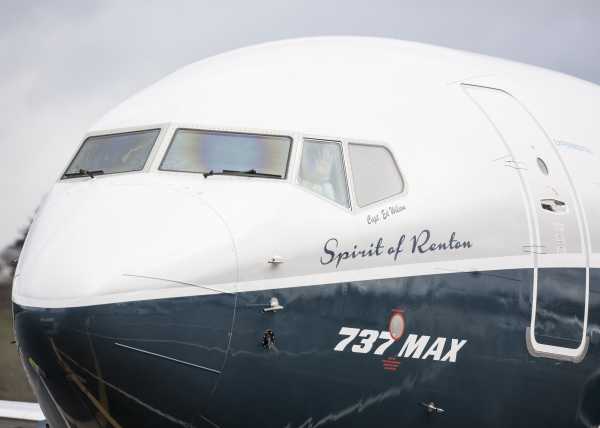 On Tuesday, President Donald Trump responded to news that a Boeing 737 Max 8 jet crashed in Ethiopia on Sunday not by offering condolences to the families of the eight Americans who were killed, but by tweeting that in his view, “Airplanes are becoming far too complex to fly.”

“[O]ften old and simpler is far better,” Trump wrote, before lamenting that the increasing automation of planes results in “complexity” that “creates danger.”

“I don’t know about you, but I don’t want Albert Einstein to be my pilot,” Trump concluded. “I want great flying professionals that are allowed to easily and quickly take control of a plane!

The Ethiopian Airlines crash in Ethiopia, which killed all 157 people on board, marked the second Boeing 737 Max 8 jet to go down in roughly five months. In October, a Boeing 737 Max 8 operated by the Indonesian airline Lion Air crashed into the sea, killing 189 passengers and crew.

It’s very unusual for two relatively new planes of the same model to go down in such a short window of time, so legitimate questions are being asked about the safety of the 737 Max planes, which have now been grounded in a number of countries while the crash in Ethiopia is investigated.

The specific cause of the latest crash is not yet clear, but on Tuesday evening, the Dallas Morning News reported that pilots repeatedly raised complaints about the planes:

Sens. Ted Cruz (R-TX) and Mitt Romney (R-UT) have publicly urged the Federal Aviation Authority (FAA) to temporarily ground 737 Max planes, but the planes currently remain in service. In a statement released Monday, the FAA said, “if we identify an issue that affects safety, the FAA will take immediate and appropriate action.” Boeing CEO Dennis Muilenburg, who reportedly donated $1 million to Trump’s inauguration, called the president on Tuesday and lobbied him not to ground the 737 Max planes.

It’s true that passenger airlines are becoming more automated. In a 2017 piece about Boeing’s push to develop totally automated planes that don’t even require a human pilot, for instance, Wired detailed how “autopilot technology already does most of the work once a plane is aloft, and has no trouble landing an airliner even in rough weather and limited visibility.”

Automation has risks. The crash of Air France Flight 447 in the Atlantic Ocean in June 2009 that claimed 228 lives occurred after a failure of the Airbus A330-203’s automated system. Tragedies of that sort, however, are the exceedingly rare exception to the rule. According to Boeing, close to 80 percent of commercial airline accidents are caused by pilot error. So if Trump meant to suggest that passenger air travel is becoming more dangerous as automation increases, the facts don’t back him up.

Automation of airplanes has correlated with more safety, not less

According to data compiled each year by the Aviation Safety Network (ASN), the number of international commercial airline accidents has been steadily declining for the past 45 years, down to 18 last year from 73 in 1972. 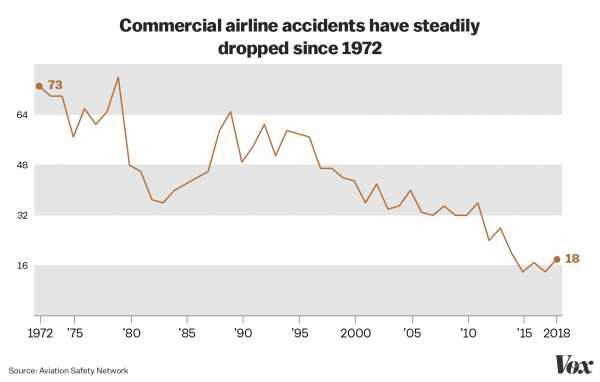 As the number of accidents has declined, so have fatalities. There were 561 fatalities as a result of accidents involving commercial airline planes last year — a huge spike from 2017, which was the safest year for commercial passenger air travel on record, but a remarkable decline from 2,385 in 1972. 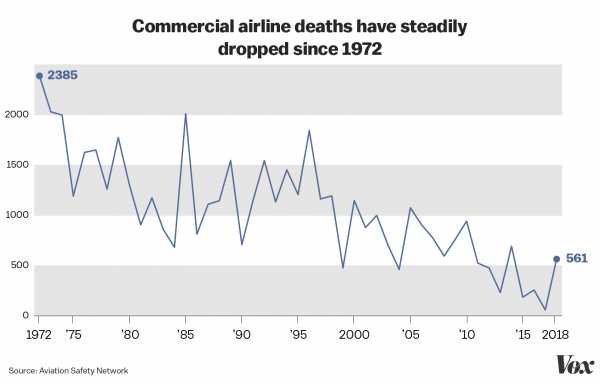 These downward trends have been especially apparent in the United States, where there hasn’t been a fatal commercial plane crash for more than a decade — since February 2009. (That’s not to say there haven’t been deadly incidents on planes — last April a woman was killed after a fan blade on a Southwest Airlines 737 broke loose.)

In fact, in January 2018, Trump himself tried to take credit for the fact that there were no commercial aviation-related deaths in the US in 2017.

Trump’s boast was misleading in at least three respects. First, in claiming he had been “very strict on Commercial Aviation,” the president was referring to a vague “Air Traffic Control Reform Initiative” that contained a proposal to take air traffic control responsibilities away from the FAA, and instead hand them over to a nonprofit entity that would likely be controlled by the major airlines. That proposal was widely criticized by industry groups, lacked support among Republicans, and was quickly ditched by members of Congress.

Secondly, in 2017, there were zero accident deaths on commercial passenger jets anywhere in the world, not just in the US. And finally, Trump was trying to credit himself for a streak that actually began the month after President Barack Obama took office.

While Trump’s Tuesday morning tweets sound a bit like a bully picking on the math nerds in the schoolyard, the fact is the “computer scientists” derided by the notoriously tech-skeptical president have actually have made flying much safer than it was in the 1970s.

Then again, it’s not surprising that Trump would express a view not in accordance with data. Earlier Tuesday, he expressed agreement with the view that climate science is “Fake News” because he saw someone say it on Fox News.

Trump is also in the habit of sensationalizing isolated occurrences when they reinforce his preconceived narratives. For instance, Trump often invokes specific cases of immigrant crime to make a case that immigrants bring drugs and violence into the United States, despite the fact that data indicates immigrants (both documented and otherwise) commit crimes at lower rates than native-born Americans.

Along similar lines, while any plane crash is a terrible tragedy, the fact that two have happened in recent months does not necessarily indicate that passenger airplanes in general are becoming less safe — let alone that we’d be better off not having the technology that has led to a dramatic reduction in aviation fatalities both in the United States and around the world.