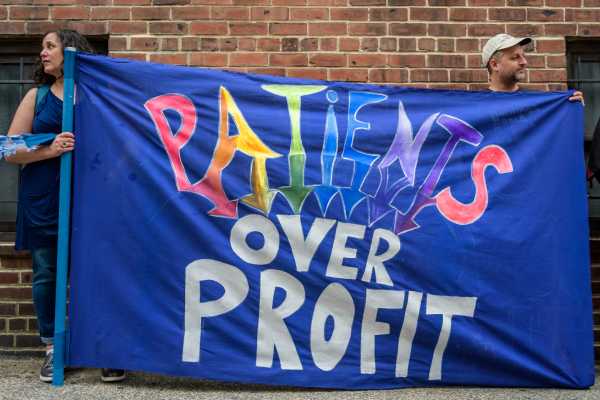 In Democratic presidential debates up until this point, it has felt like Medicare-for-all is the only health care issue in America. But there is so much more to discuss.

If overhauling the US health care system isn’t on the table in January 2021, drug prices, the opioid crisis, hospital spending, and long-term care are all deeply important problems that a Democratic president will need to turn their attention to if he or she wins.

“If [Medicare-for-all] is a no-go in Congress, then what changes would they make to the current system?” as Walid Gellad, who studies drug prices and other issues at the University of Pittsburgh, put it to me.

The executive branch still has a remarkable amount of power on health care. It is still in charge of Medicare and Medicaid, the two largest insurance programs in the country, and it controls a vast public health apparatus and the regulations that keep it in check. The Trump administration is using its administrative authority to impose Medicaid work requirements and scale back abortion and LGBTQ protections. But a Democratic president could race in the other direction, with an ambitious executive agenda on health care.

Those issues aren’t quite as sexy as Medicare-for-all, which promises to remake American health care from the ground up, for either the candidates or the media. But they would tell us a lot about how the different candidates would actually govern.

Ezra Klein already laid out the path to a better debate about single payer. But it’s time now, with the third debate coming up on Thursday night, to think a little more broadly about what a future president could do to improve health care in America. I asked a variety of health care experts what they would like to hear from the candidates. This is what they told me.

1) What would you do to lower health care costs for consumers?

Ballooning out-of-pocket costs plague Americans with private insurance. For people who get insurance through their job, which is about half of us, deductibles have been steadily on the rise for years.

The number of Americans considered underinsured has more than doubled since the turn of the century, according to data from the Commonwealth Fund. That means they have an insurance card, but their coverage doesn’t provide adequate financial protection in case of a serious medical event.

One of the common complaints about Obamacare is that many of the plans sold through the law still ask consumers to pay thousands of dollars out of pocket. But more importantly, among people with employer-sponsored insurance, the percentage of people who are underinsured nearly tripled since the beginning of the 21st century. Research indicates that people will forgo medical treatment because they’re worried about their out-of-pocket obligations. A recent survey by Gallup found that 1 in 4 Americans said they had skipped seeking health care in the last year because of cost concerns.

“How would you reduce or eliminate the deductibles faced by people who are covered by their employer?” said Adam Gaffney of the Harvard Medical School, who supports single payer.

Americans are feeling the pinch of high health care costs. Democratic candidates should have an answer for what they would do to relieve it if a major overhaul isn’t attainable.

2) What are you going to do about hospital prices?

We talk a lot about drug prices. But hospital prices have also been growing at an exorbitant rate. From Modern Healthcare earlier this year:

And hospitals make up a much bigger slice of the health care spending pie. 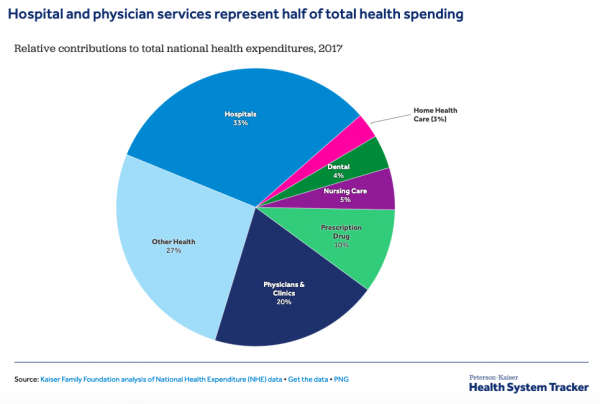 And yet, as the Atlantic’s Olga Khazan astutely observed after the most recent Democratic debate, presidential candidates aren’t laying the blame of America’s health care problems on hospitals, fixating instead on pharmaceutical companies and health insurers.

It makes some sense: Pharma and insurance companies are much more conventional villains. Hospitals have historically been sympathetic and they are important constituents for almost every lawmaker — what congressional district doesn’t have a hospital? But the uproar over surprise medical bills (almost always incurred at hospitals) and the spate of new stories about hospitals suing patients with unpaid bills should force presidential candidates to look more critically at this pivotal sector of the health care ecosystem.

“There is a lot of discussion about drug prices. How about hospital prices?” Larry Levitt, senior vice president at the Kaiser Family Foundation, said. “Are they too high? What would you do to bring them down?”

3) But seriously, how are you going to lower drug prices?

The reason we talk a lot about drug prices is because, besides going to the doctor, getting a prescription filled at the pharmacy is one of the most common interactions that Americans have with the health care system (and its high costs). About half of Americans take a prescription drug every month. One in four says it’s difficult to afford their medication.

Rachel Sachs at Washington University in St. Louis, one of the nation’s leading experts on drug prices and the recent debate, ran through a list of questions she would have for the leading 2020 Democratic candidates on this crucial subject. To paraphrase her thoughts:

For Joe Biden: Why didn’t his work on the cancer moonshot initiative focus more on reducing the price of costly new cancer drugs?

For Kamala Harris: Are there medications she would consider good candidates for march-in rights or compulsory licensing (when the government effectively revokes a drug maker’s patent on a treatment and ends their monopoly on producing it) and why?

For Bernie Sanders: Why should the United States try to match the prices paid for drugs in other developed countries, rather than focus on fixing the US market on its own terms?

For Elizabeth Warren: Does she think the government actually has the capacity to manufacture (or contract with private companies to manufacture) generic drugs, as she has proposed in Senate legislation?

For Pete Buttigieg: What is your plan to lower drug prices?

4) What are you going to do about long-term care?

Long-term care for the aging or the chronically ill is expensive and we don’t have a good way of paying for it in the United States. For most people, you are either wealthy enough to pay for it on your own or you spend down your own resources so much that you become eligible for Medicaid (which, remember, is targeted to low-income Americans).

Look at some of these average costs, via the US Department of Health and Human Services:

Right now, the average lifetime cost for long-term care is $172,000, according to a recent study from PricewaterhouseCoopers. And the problem is only going to get worse as the baby boomers age and more Americans require long-term services and support. The same report projects the total financial burden of long-term care — which includes informal care and lost productivity for people who must care for loved ones — to double from $2.8 trillion to $5.6 trillion by 2047.

Long-term care is a hard problem to solve because it’s so expensive. A long-term care insurance program set up under Obamacare couldn’t even get off the ground because of the prohibitive price tag. For many years, the various Medicare-for-all bills in Congress did not include long-term care as a benefit, though recent iterations have added it.

With or without single payer, the long-term care bubble is going to burst — unless the coming administrations have a plan to do something about it. We should hear from the 2020 candidates what they would propose.

Our Year in Poems |