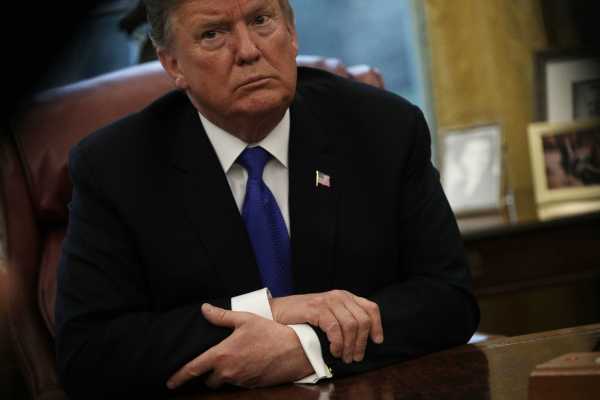 A former staffer says that Donald Trump kissed her without her consent in 2016; she’s the first woman to accuse him of sexual misconduct after his presidential campaign began.

Alva Johnson, who worked for the Trump campaign in Florida, says that Trump grabbed her hand and kissed her on the lips outside a rally in Tampa in August 2016, Beth Reinhard and Alice Crites report at the Washington Post.

“I immediately felt violated because I wasn’t expecting it or wanting it,” Johnson told the Post. “I can still see his lips coming straight for my face.”

Her allegation is consistent with a pattern that Trump himself has described. On the 2005 Access Hollywood tape, Trump can be heard saying, “I’m automatically attracted to beautiful — I just start kissing them.”

After the tape was released by the Washington Post in October 2016, many women came forward to say that Trump had kissed or touched them without their consent, or committed other sexual misconduct. But the conduct they described all took place before Trump began his run for president. Johnson is the first woman to come forward since Trump took office, and the first to accuse him of misconduct during the campaign, according to the Post.

Trump has denied all the allegations against him, and White House press secretary Sarah Sanders called Johnson’s claim “absurd on its face.” But Johnson’s allegation, and a lawsuit she is filing in federal court, could cause trouble for him in the run-up to 2020.

Johnson, 43, was a two-time Obama voter when she met Trump in 2015, she told the Post. But Johnson, who is black, thought Trump might be able to use his business skills to help black communities.

When she first met Trump at a 2015 rally in Birmingham, Alabama, he looked her up and down and said, “Oh, beautiful, beautiful, fantastic,” she says in her lawsuit. Despite this comment, she took a job as director of outreach and coalitions for the Trump campaign, working first in Alabama and later in Florida.

As Trump exited his RV outside the Tampa rally, she says in the lawsuit that he passed by her.

“I’ve been on the road for you since March, away from my family,” she says she told him. “You’re doing an awesome job. Go in there and kick ass.”

Then, she said, he grabbed her hand, thanked her for her work, and leaned close.

“He’s coming straight for my lips,” she told the Post. “So I turn my head, and he kisses me right on corner of my mouth, still holding my hand the entire time. Then he walks on out.”

Sanders, the White House press secretary, told the Post in a statement that “this never happened and is directly contradicted by multiple highly credible eye witness accounts.” Johnson told the Post that another campaign official and Pam Bondi, then the attorney general of Florida, saw the kiss. But both denied seeing the incident.

Johnson also told the Post that she discussed the unwanted kiss at the time with her then-boyfriend, mother, and stepfather, all of whom recalled the conversations.

Johnson kept working for the campaign, but after she heard the Access Hollywood tape, she said, “I felt sick to my stomach.”

“That was what he did to me,” she added. She quit about three weeks before the election. In October 2016, she also consulted with a lawyer. According to text messages provided to the Post, the lawyer found her story credible but did not take her case because “right now my practice simply cannot dive into something like that which would be so time-consuming with an uncertain outcome.”

Johnson filed suit on Monday in federal court. In addition to detailing her sexual misconduct allegation, the suit also alleges that Johnson was paid less than her white male colleagues on the campaign. A campaign spokesperson denied that allegation to the Post.

After Trump became president, Johnson twice applied for jobs with the administration, but was unsuccessful, the Post reports. She said this experience did not influence her decision to sue.

Johnson’s allegation comes as Trump gears up for his 2020 reelection bid. Sexual misconduct allegations against him obviously did not derail his 2016 campaign. But that was before the growing #MeToo movement ushered in a nationwide reckoning around sexual harassment and assault.

Republican voters have generally been more skeptical around #MeToo allegations than Democrats, but some Republican women have become frustrated with their party’s relative inaction around sexual misconduct. A new accusation against Trump, especially coupled with a federal lawsuit, could shine new light on an issue the Trump campaign likely hoped to put behind them.

Johnson, for her part, says she’s been unable to forget what happened to her in 2016.

“I don’t sleep,” she told the Post. “I wake up at 4 in the morning looking at the news. I feel guilty. The only thing I did was show up for work one day.”

How will 2020 Democrats deal with jobs eliminated by artificial intelligence?

Massimiliano Allegri has no intention of rushing Cristiano Ronaldo back

Pizza, Soccer & Toilet in Zero Gravity: Decades of Humans in...