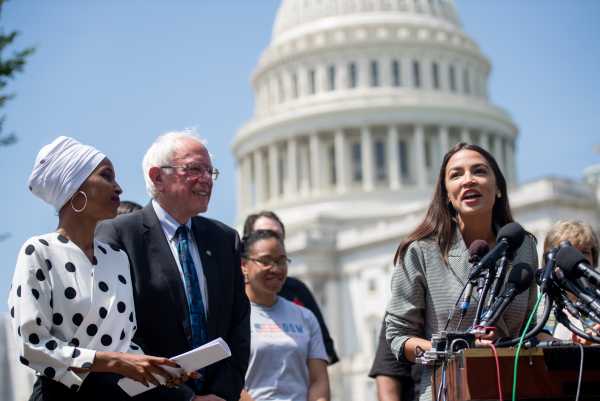 First-term Reps. Ilhan Omar and Alexandria Ocasio-Cortez are supporting Sen. Bernie Sanders’s candidacy for president. Their backing comes as Sanders is struggling in the polls, and the endorsement of the representatives, all popular with the Democratic base, could help the candidate find new support and reenergize his campaign.

Ocasio-Cortez will reportedly officially announce her endorsement of Sanders Saturday at a rally in New York City; his campaign has said the event will include a “special guest,” and the Washington Post reports that guest is the first-term lawmaker. A spokesperson for Ocasio-Cortez told the Post, “We’re looking forward to Saturday,” but declined to comment on her plans.

Omar, one of Ocasio-Cortez’s closest allies in the House of Representatives and member of a group known as the Squad (which is comprised of Ocasio-Cortez, Omar, and Reps. Ayanna Pressley and Rashida Tlaib), was not so tight-lipped. She tweeted Wednesday that she was “proud to endorse” Sanders and that she was “glad that [Ocasio-Cortez] and [Tlaib] are on board too.”

Tlaib, however, said Wednesday she has not yet decided on any presidential endorsements.

She suggested she may choose to endorse a candidate — but not necessarily Sanders — following a trip by the Vermont senator to her Michigan district in late October, saying she will take her constituents’ thoughts of the Democratic primary into account before supporting any one candidate.

“It is critically important to me to involve my residents and my district in every major decision I make because staying rooted in community makes our movement stronger,” she told the Detroit Free Press, adding that whoever she backs will need a platform that address her constituents’ concerns.

In a statement distributed by the Sanders campaign, Omar said the senator’s progressive policies and the fact he “is leading a working class movement to defeat Donald Trump that transcends generation, ethnicity and geography” led to her endorsement.

As Vox’s Anna North has reported, the fourth member of the Squad, Pressley has also declined to endorse Sanders at this time.

Before Biden entered the presidential race in April, Sanders was the Democratic frontrunner; after Biden announced his candidacy, polls showed Sanders’s support falling, but he remained in second place.

His momentum has since seemed to have stalled; RealClearPolitics’ polling average shows his support in polls averaged around 16 percent throughout the summer. For a time, this was enough to keep him in second place. In recent weeks, however, Sen. Elizabeth Warren’s support has increased by large margins. The RealClearPolitics average shows her to be roughly 6 percentage points behind Biden, although some recent national and state polls have shown her to be at the top of the field. Sanders is third behind Warren’s 23 percent average support; RealClearPolitics puts his at 15 percent.

Beyond his troubles with polling, Sanders had to suspend his campaign for much of October after a heart attack. He appeared for the first time at an official event at Tuesday’s fourth Democratic presidential debate. There, when asked about his health, he responded, “I’m healthy. I’m feeling great!” and invited those unsure about his strength to a Saturday rally in Queens — the one at which Ocasio-Cortez is expected to official endorse the candidate.

One area Sanders has bested his opponents in is fundraising. He announced in early October that his campaign took in $25.3 million during the third quarter of this year — more than anyone else (although Warren raised $24.6 million). And according to the Washington Post’s Michelle Ye Hee Lee, Sanders has more cash on hand than any other candidate: $33.7 million. Warren, the candidate with the second most, has $25.7 million; Biden has just $9 million. This will give Sanders latitude to buy ads and hire staff in order to work to better his standing.

Omar and Ocasio-Cortez could also be key in helping to boost Sanders, particularly if they act as his surrogates. Both are vocal members of their caucus who are seen as rising stars. Each — in part thanks to attacks against them by Trump and other Republicans — has high name recognition and large social media followings through which they are able to connect to and influence Democrats nationally.

The endorsements also help Sanders burnish his progressive bona fides and to further differentiate himself from fellow liberal candidate Warren, something he has sometimes struggled to do. He told ABC’s Meet the Press last week one key difference between the two is that “Elizabeth, I think, as you know, has said that she is a capitalist through her bones. I’m not.” With two of Democratic Party’s most famous progressives now in his camp, Sanders can offer further proof that he, not Warren, is the candidate who best typifies progressive ideas.

All of this said, Omar and Ocasio-Cortez are just two people. They alone cannot suddenly make Sanders the frontrunner. But with their help, he should be able to further energize his base and perhaps recruit new supporters from their very broad bases of support. With the first primary contests drawing closer, Sanders needs to show he remains a strong contender for the nomination, and key endorsements like these can only assist in doing so.

Update: This piece has been updated to reflect new reporting on Rep. Tlaib’s position regarding the 2020 presidential primary.

7 better health care questions than “will you abolish private insurance?”

A new Senate report is the latest threat to NRA’s tax-exempt...