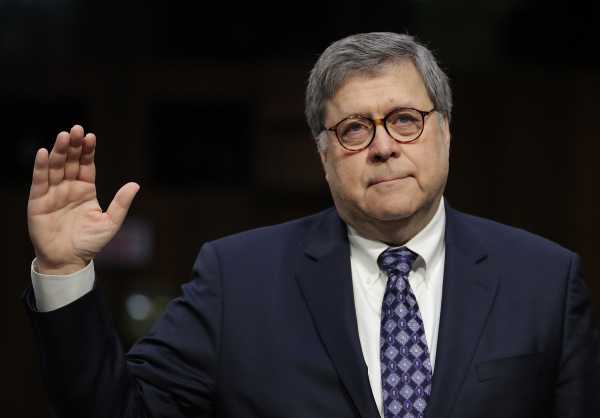 Barr, who previously held the position under President George H.W. Bush, will now become head of the US Department of Justice. He’ll replace Matthew Whitaker, who became acting attorney general after Jeff Sessions resigned from the job last year.

For now, a lot of the attention around Barr has focused on what his new role could mean for the Russia investigation.

But as head of the Justice Department, Barr will have a lot of control over the federal criminal justice system more broadly. And although criminal justice reform has gained momentum in recent years (leading to the passage of the federal First Step Act, with Trump’s support), Barr’s views have historically been on the opposite end of the spectrum — supportive of mass incarceration and other “tough on crime” policies.

In fact, Barr praised Sessions’s record at the Justice Department, including some of his work dismantling criminal justice reform efforts by President Barack Obama’s administration.

In short: If you were hoping that Sessions’s replacement would be better on criminal justice reform, Barr’s nomination should be of great concern.

Barr doesn’t just have a record of supporting the war on drugs and mass incarceration. As attorney general for George H.W. Bush, he was one of the architects for federal policies that supported both.

Here are some examples, noted in part by Grawert and civil rights lawyer Sasha Samberg-Champion:

It’s possible that Barr’s views have evolved over the years, just as many people’s views have toward the drug war and mass incarceration, especially as crime has plummeted in the past two decades. This may even apply to Trump, who ran on a “tough on crime” platform in 2016 but went on to sign the biggest federal criminal justice reform bill in decades, the First Step Act, after the urging of his son-in-law and adviser Jared Kushner.

But Barr has continued advocating for “tough on crime” views, at least until recently. In 2015, he signed a letter with other former law enforcement officials to oppose a federal sentencing reform bill, according to Michael Balsamo at the Associated Press.

In November, Barr and two other former attorneys general wrote an op-ed for the Washington Post in which they defended Sessions’s “tough on crime” record. They criticized the Obama administration for investigating police abuses and discouraging more aggressive policing practices. They also praised Sessions for his memo encouraging federal prosecutors to pursue harsher prison sentences against drug offenders.

In his opening remarks at the Senate confirmation hearings, Barr vowed to “diligently implement” the First Step Act but also affirmed his commitment to “keep up the pressure on chronic, violent criminals.” And he later argued at the hearings that the 1980s and ’90s were a different time, when crime was much higher and prison sentences much shorter, so his call for more punitive punishments was warranted.

Barr’s support for more punitive criminal justice policies goes against the research, which has found that more incarceration and longer prison sentences do little to combat crime.

Another huge review of the research, released last year by David Roodman of the Open Philanthropy Project, found that releasing people from prison earlier doesn’t lead to more crime, and that holding people in prison longer may actually increase crime.

That conclusion matches what other researchers have found in this area. As the National Institute of Justice concluded in 2016, “Research has found evidence that prison can exacerbate, not reduce, recidivism. Prisons themselves may be schools for learning to commit crimes.”

This is the kind of research that has driven support for criminal justice reform over the years, including the First Step Act. But it also suggests that much of Barr’s initial work on criminal justice issues, particularly his support for mass incarceration, was misguided. It remains unclear if and how that has changed Barr’s mind.

Consider the numbers: According to the US Bureau of Justice Statistics, 87 percent of US prison inmates are held in state facilities (and most state inmates are in for violent, not drug, crimes). That doesn’t even account for local jails, where hundreds of thousands of people are held on a typical day in America. Just look at this chart from the Prison Policy Initiative, which shows both local jails and state prisons far outpacing the number of people incarcerated in federal prisons: 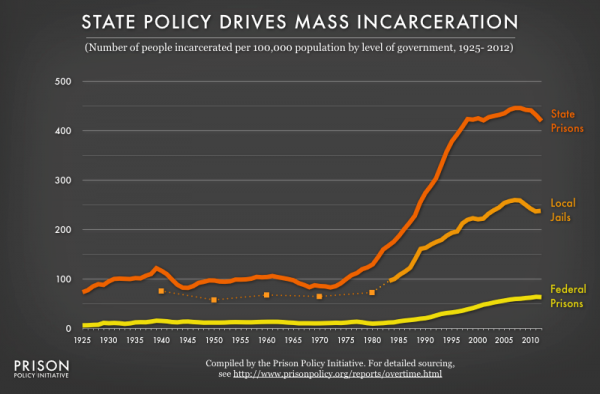 One way to think about this is what would happen if Trump used his pardon powers to their maximum potential — meaning he pardoned every single person in federal prison right now. That would push down America’s overall incarcerated population from about 2.1 million to about 1.9 million.

Similarly, almost all police work is done at the local and state level. There are about 18,000 law enforcement agencies in America, only a dozen or so of which are federal agencies.

While the federal government can incentivize states to adopt specific criminal justice policies, studies show that previous efforts, such as the 1994 federal crime law, had little to no impact. By and large, it seems local municipalities and states will only embrace federal incentives on criminal justice issues if they actually want to adopt the policies being encouraged.

So Barr may represent another grim few years for criminal justice reformers at the federal level. But they’ll still have plenty of opportunities in cities, counties, and states, which hold far more sway in the overall justice system.

When We Think About the Pee Tape |

Taliban Kill 3 Soldiers in Attack on Checkpoints in Eastern Afghanistan...