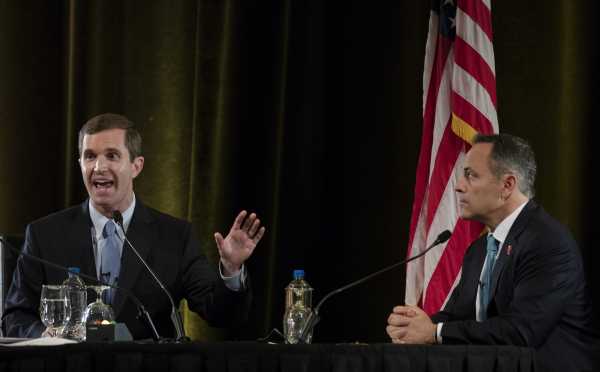 It’s a major loss for Republicans in a state where they hold supermajorities in both chambers of the state legislature, both US Senate seats, and five out of the state’s six House seats. Bevin pulled out all the stops to clinch a win; President Donald Trump rallied in Lexington, Kentucky, Monday night ahead of the election to turn out voters. But even that last-ditch effort wasn’t enough — a sign that Trump’s influence isn’t omnipotent.

At the end of the day, in the eyes of Kentuckians, Bevin remained an extremely unpopular governor. He threatened to cut Medicaid expansion in the state, which would have likely pushed about 400,000 people off their health insurance.

And his time in office was met with statewide protests by Kentucky teachers, after he pushed to cut pensions. Bevin called teachers “ignorant” and “selfish,” and said kids were likely exposed to sexual assault because teachers were protesting instead of staying in the classrooms. He eventually apologized for the comment, but not without saying teachers were acting like “thugs.”

Beshear won on a campaign focused on statewide issues around health care and education. He promised teachers raises and new funding streams for the pension system. He has said he is pro-choice, will protect Medicaid, pushing back against Bevin’s proposed Medicaid work requirements.

Bevin’s defenders say he became a political casualty after attempting to take on some of Kentucky’s most pressing and politically difficult issues, like the pension system that has accumulated $43 billion in debt since 2000. But the reality is many Kentuckians instead saw a leader attacking some of the most vulnerable in the state. And Bevin’s effort to make the race about Trump — who remains in Kentuckians’ good graces — could not mask years of controversial conservative policies.

Does this mean Mitch McConnell is going to lose his Senate seat? Not so fast.

The Beshear win is big for Democrats. But Democratic and Republican strategists alike warn against extrapolating much further. Senate Majority Leader Mitch McConnell may be up for reelection in 2020, but that race is entirely separate from the governor’s race Democrats just won.

“It certainly doesn’t hurt to have party infrastructure going into a federal election cycle, but that race is going to be that race,” Matt Erwin, a Kentucky Democratic strategist, said.

Kentucky has had a strong history with Democratic governors (one Beshear is actually a part of; his father Steve Beshear was a two-term governor during the Barack Obama years, and expanded Medicaid under the Affordable Care Act). But federally, Kentucky is conservative — and Trumpian.

Trump won the state by a whopping 30 points, and his popularity in Kentucky has remained consistently high. While McConnell is unpopular, he’s still the clear favorite to win.

“Even if you don’t love McConnell, he’s still a Republican and a very powerful Republican at that,” Jessica Taylor, with the nonpartisan Cook Political Report, told Vox ahead of the election.

Scott Jennings, a Republican strategist and pundit in the state, said while it’s “enormously frustrating to lose the governor,” Republicans know that this isn’t the worst-case scenario for them.

Delaney steps down as FAI CEO but retains control of key...

Lionel Messi got his goal but Ever Banega is key for...