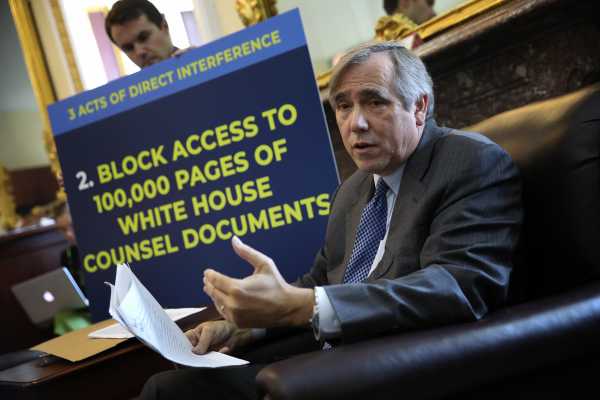 Sen. Jeff Merkley (D-OR) is seeking an injunction from a judge in the US District Court for the District of Columbia that, if granted, could effectively halt a Senate vote to confirm Kavanaugh.

Merkley is alleging that the Trump administration is violating the separation of powers by not releasing hundreds of thousands of documents related to Kavanaugh’s time as a lawyer in President George W. Bush’s administration, charging that this knowingly prevented senators from doing their constitutional duty to advise and consent the president by vetting Kavanaugh.

“It seeks for the Senate not to be able to proceed to a vote on Judge Kavanaugh’s confirmation until the Senate has been able to exercise its constitutional responsibility,” Merkley told reporters, “to examine the record of the individual in order to make a determination of whether that individual is fit or unfit to hold office.”

Merkley’s lawsuit is an attempt to come back to a concern Senate Democrats have hammered from the beginning, that Republicans are completely ignoring the standard process to confirm a Supreme Court nominee, and trying to rush Kavanaugh through.

Currently, a Senate Judiciary vote on the judge is scheduled for Friday at 9:30 am, just a day after Kavanaugh sexual assault accuser Christine Blasey Ford and Kavanaugh himself are scheduled to testify in front of the committee.

Republicans want to bring Kavanaugh’s confirmation to the full Senate on Saturday. Republicans leaders have said the vote could happen on Monday or Tuesday. But things are in flux as now three women have gone public with sexual assault and misconduct allegations against Kavanaugh.

Does Merkley’s injunction have a shot?

The likely answer is no.

Merkley’s lawsuit and the injunction he’s requesting probably have a tough road ahead — given the late hour they’re appearing, and the lack of legal precedent.

The Democratic senator — alleging a violation of separation of powers — is suing the executive branch in an attempt to get the judicial branch to stop a vote of the legislative branch. Merkley says he’s trying to protect the Senate’s “advise and consent” role, which is enshrined in the Constitution. But there is not a lot of legal precedent here to back up what he’s trying to do.

Historically, there hasn’t been a case where a judge has ruled to halt a Senate vote to confirm a Supreme Court nominee, and Merkley admitted he was not aware of any such case on Wednesday. But Merkley, like other Democrats, argued the Trump administration is flaunting precedent by not releasing the documents in the first place.

“I’m not aware of such a precedent,” Merkley said. “The courts, and I’m speaking to you not as a lawyer, but the courts have considered cases regarding separation of powers and consider that a fundamental element of our Constitution — the system of checks and balances.”

At this point, the more likely chance for Kavanaugh’s nomination to be slowed or stopped altogether is if Kavanaugh himself withdraws or Republicans decide the accusations piling up against him are too much. On Wednesday, a third allegation surfaced from a woman who says she saw Kavanaugh drunk and sexually assaulting young women at high school parties emerged, causing the leader of Senate Democrats, Sen. Chuck Schumer (D-NY), to call for Kavanaugh to withdraw. Republicans reportedly don’t have enough votes to confirm the nominee, whose path seems more uncertain with each passing day.

Weeks before Christine Blasey Ford, Deborah Ramirez, and now Julie Swetnick came forward with separate allegations of sexual misconduct against Kavanaugh, Senate Democrats were complaining about how rushed the process was.

The process of confirming a Supreme Court justice means senators are typically given time to reviews a nominee’s entire public record before they question the nominee about it in the Judiciary Committee hearings. And as Vox explained, while the pace of Kavanaugh’s confirmation isn’t necessarily unprecedented, the timeline is.

Democratic senators were enraged when the Bush White House library released 42,000 pages of documents from Kavanaugh’s time in the White House just hours before the start of Kavanaugh’s confirmation hearing.

“For the record, that is a rate of 7,000 pages per hour,” Sen. Sheldon Whitehouse (D-RI) complained, noting that congressional staff would never be able to comb through that amount of documents in time for Kavanaugh’s hearing. “That is superhuman.”

Indeed, the first morning of Kavanaugh’s confirmation hearing became a platform for Democratic senators on the committee to complain, one by one, about how much Republicans were obscuring information about Kavanaugh and rushing through the proceedings.

In his 44 years in the Senate, voting on 19 nominations to the Supreme Court, Sen. Patrick Leahy (D-VT) said he had never seen a process like Kavanaugh’s confirmation.

“I have been on this committee under Republican and Democratic leadership; I never thought the committee would sink to this,” Leahy said, directing his comments to Kavanaugh. “In fact, you should not be sitting in front of us today. You should be sitting in front of us only after we have completed a review of your record. Your vetting is less than 10 percent complete. In critical ways, our committee is abandoning its tradition of exhaustively vetting Supreme Court nominees.”

This has become even more pressing in the wake of multiple sexual assault and misconduct allegations levied against Kavanaugh. Republicans have set at least one hearing for Ford and Kavanaugh to testify — and Senate Judiciary Committee Chair Chuck Grassley (R-IA) is reportedly entertaining another hearing now that a third woman has come forward.

But the picture is clear: Republicans want to confirm Kavanaugh before the midterms occur, and they face the slim chance that they could lose control of the Senate. Democrats, on the other hand, would love a slowed-down schedule.

“It wouldn’t be last minute if the majority leaders here were not rushing this through. We have seen over just the past month of August and into September, this obstruction has mounted and mounted in different forms,” Merkley told reporters.

‘Europe Has to Grow Up’: German President Voices Concern Over EU-US...

China to Open Solar Superhighway that Charges Electric Cars in 2022