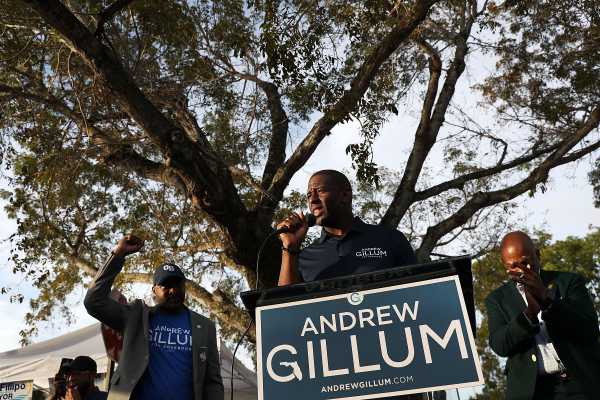 On Tuesday, there is perhaps no state more important for Democrats to win than Florida.

Democrats need to hold onto every Senate seat they can — and Florida Sen. Bill Nelson is in the fight of his life against Republican Rick Scott. A Democratic governor could have a huge impact on redrawing the state’s congressional maps and pushing forward on Medicaid expansion, and Democrat Andrew Gillum is energizing Florida’s young and minority voters.

The enthusiasm for Gillum is palpable, and some believe it could boost the entire Democratic ticket.

“He is quite possibly going to increase turnout among Democratic constituencies that traditionally do not turn out,” said Mac Stipanovich, a lobbyist and longtime Republican strategist in Florida. “At the end of the day, it’s the way it’s always going to be, it’s going to come down to turnout.

The math is fundamentally tricky for Democrats. They need to mobilize voters that typically do not turn out to vote in midterms — young voters, black voters, a typically more conservative Latino base, and recently transplanted Puerto Rican voters. Meanwhile, Republicans may also be able to count on the uptick in older white retirees who have moved to the state to vote for their candidates.

Stipanovich says that it’s worth keeping an eye on the heavily Democratic Broward County on Tuesday night. If turnout there is anything like it is in presidential election years, that’s very good for Gillum. If turnout is high in Miami Dade and Palm Beach counties, that’s even better for the Democrat.

Florida is one of those states that seems like it should be prime territory for Democrats, but often isn’t. Trump won the state by a single point in 2016.

The state has a massive, shifting population that includes 64 percent white registered voters, 16 percent Hispanic voters, and another 13 percent black. It has a large retiree population, but also a large number of young people. (Older voters tend to vote at higher numbers than younger ones.)

“I think in the last 10 to 12 years, Florida has operated like a self-correcting scale,” said longtime Democratic consultant Steve Schale. In other words, as soon as one force appears to shift the Sunshine State in a more Democratic direction, another one appears to push back against it.

Here are those demographic forces broken down and briefly explained.

Florida is a retiree paradise, which helps explain why President Trump remains (relatively) popular in this swing state, certainly more so than in many of the other swing states like Arizona, Iowa, Ohio, Wisconsin, Pennsylvania, or Michigan that he also won in 2016.

The thing pushing back against Democrats’ gains is a substantial population of white retirees that helped deliver Trump a win in 2016. Trump’s approval rating has fallen slightly in Florida since 2016, but it’s still a net positive, according to Morning Consult’s approval rating tracker.

Because retirees are coming to Florida from all over the country, it’s important to remember that older, white, retired “Florida voters” are really just conservative voters from all corners of America. And they are reliable at the voting booth; a boon for Republicans and a problem for Democrats.

The white voter number is the one Schale watches every election night, and right now he is optimistic Gillum can get what he needs to win.

Race has become a flashpoint in the Florida governor’s race. Gillum is a young, black Democrat with local ties and an inspirational story. And he’s accused both Trump and his Republican opponent Ron DeSantis of race-baiting throughout the election.

Trump recently called Gillum a “thief” in connection to an FBI investigation into corruption in Tallahassee city government (Gillum is Tallahassee’s mayor), and DeSantis once urged voters to not “monkey this up” by casting a ballot for Gillum. That has many in Florida’s black community infuriated, and it could spur turnout.

Black voters overwhelmingly tend to vote blue, so they are a key demographic for Democrats. It’s mostly a question of turning them out, and there’s plenty of evidence to suggest they are fired up to go to the polls this year, both to vote for Gillum and to rebuke Trump and his rhetoric. There was already evidence of this in the primary, per the Tampa Bay Times.

“People are adopting their own style of campaigning for Andrew Gillum,” he said. “We’ve seen murals pop up. Someone created a Gillum mixtape. These are voters who by and large are not getting polled … they don’t have landlines or they’re ignoring these calls.”

Florida’s Hispanic and Latino population is an important part of the state electorate; they make up about 16-17 percent of the state’s registered voters. Turnout and party affiliation can be tricky, however. Despite the conventional wisdom that Hispanic voters tend to vote Democratic, Miami’s heavily Cuban-American community tends to lean more Republican, and a number of the state’s key House seats are represented by moderate Republicans.

Republican Rick Scott, the current governor now running for US Senate, is making a big play for Hispanic voters, and two polls released in early September showed him leading Sen. Nelson with among the group — polls later in September showed Nelson back in the lead among Hispanics.

And in the governor’s race, there’s a reason DeSantis is calling Gillum a socialist and making comparison’s to Venezuela’s dictatorship; he’s trying to scare older Hispanic and Latinx voters who remember life under communist and socialist governments in their home countries to vote Republican.

“It’s patently ridiculous to suggest he’s a socialist,” said Republican consultant Mac Stipanovich. “I would agree that Medicare is socialist in nature. Tell me what politician in America is against Medicare. Nobody. You’re talking about a difference in a degree, not a difference in kind.”

Both parties are also courting Puerto Ricans in Florida displaced by Hurricane Maria, hoping they will help swing the election. But the chances this group will be an important voting bloc may not be as likely as some hope. As Vox’s Tara Golshan wrote:

Still, half a percentage point in a close race can also make the difference between winning and losing.

Democrats may get a boost from Trump’s inflammatory rhetoric suggesting that the high death toll from Maria was a falsely inflated number (it was not.) There is also a lot of anger in the community of the lack of US response to hurricane recovery, and Trump cannot seem to let the issue go.

Democrats hope younger Hispanic, Latino, and Puerto Rican voters will talk to their more conservative parents and grandparents and convince them to vote Democratic.

“We’re seeing a greater willingness to have those hard conversations,” Bullard said.

Another element of uncertainty is Florida’s youth vote. Florida is also experiencing a resurgence of young, politically active voters who are motivated by the February 2018 Parkland high school shooting, which killed 17 staff and students.

“You had an amazing group of activists that came out” after the shooting, said Florida Democratic party executive director Juan Penalosa. The idea was not just about activism, but also about voting, and Penalosa believes that could be a potent force to motivate youth turnout in the state.

It’s not just the Parkland students. The Tom Steyer-affiliated group NextGen has also been organizing students on the ground at the state’s community colleges and historically black colleges and universities. So far, 50,000 young people and counting have registered from NextGen’s efforts alone.

“You have a growing student population,” said Bullard. “That makes the electorate now a little more progressive, a little more left-leaning. I think what we saw in 2016 was a failure to engage those voters.”

Andrew Gillum could be the right politician for this moment — and he could boost Sen. Bill Nelson

Even though Trump’s approval rating isn’t exactly underwater in Florida, there is also a surge of grassroots movement in the state, driven a by young, diverse electorate. And long-suffering Florida Democrats believe Gillum is the right candidate to fit the political moment.

“He’s not some sanitized notion of what a statewide candidate is supposed to be,” said Bullard. “He’s someone who comes from normal beginnings. Public school kid made good.”

Former Vice President Joe Biden recently stumped for Gillum in Florida, and Schale noted how the two were bombarded by people who wanted to shake hands.

“It was sort of comical watching Andrew Gillum and Biden walk through a rope line,” Schale laughed. “There’s no question there’s more enthusiasm there’s been for a while.”

Some argue there’s more enthusiasm for Gillum, because beyond being a charismatic campaigner, he is taking an unabashedly progressive stance on issues including Medicare-for-all, pouring $1 billion into Florida’s public schools and raising teacher salaries, and banning assault weapons.

“Democrats have continually put up this moderate Democrat. We’ve lost every time shy of 100,000 votes,” said Olivia Bercow, deputy communications director for NextGen and a native Floridian. “You need to put up progressives at the top of the ticket. You need to excite them and you need to give them someone to root for.”

Some in Florida think that could have an impact both on the governor’s race and on Democrat Bill Nelson’s Senate race. There’s not a lot of enthusiasm for Nelson, who has been in office since 2000 and isn’t exactly the flashiest candidate.

“I don’t think people dislike Nelson, I just don’t think they are committed to him,” said Stipanovich. “I think the best thing that happened to Bill Nelson recently is the nomination of Andrew Gillum. It will help Sen. Nelson; whether it will drag him across the line I do not know.”

A look at Tottenham’s perfect record at their new stadium