Home Politics Does Trump think there are actual coyotes coming over the border? 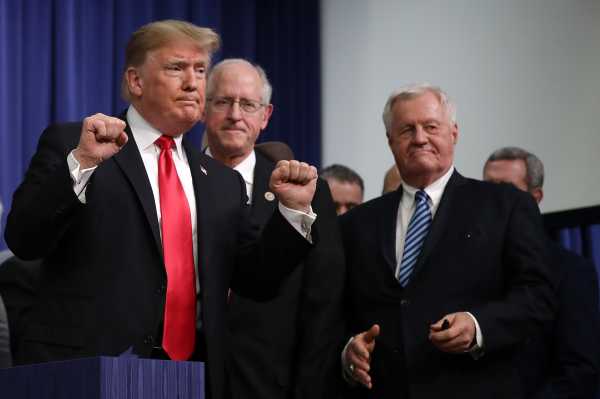 President Donald Trump as part of his insistence on the border wall is arguing that it’s necessary to stop “believe it or not — coyotes.” So-called “coyotes” are indeed a real issue at the border, but not, as Trump maybe believes, the actual animal.

Trump on Thursday while signing the 2018 Farm Bill into law took some time to talk about border security and, specifically, the wall at the US-Mexico border. Trump is currently threatening a government shutdown if $5 billion for funding for the wall isn’t included in a stopgap funding bill passed by Congress.

“A nation without borders is not a nation at all,” Trump said. “Without borders, we have the reign of chaos, crime, and — believe it or not — coyotes.”

After spouting off some factually dubious claims about immigration and border security — including the false assertion that illegal immigration costs the United States over $200 billion a year — Trump brought up coyotes again.

“Every year, 50,000 illegal children are smuggled by coyotes and criminals into our country,” he said.

Trump’s Thursday references to coyotes were a bit of a head-scratcher: Does Trump think actual coyotes — you know, the canine kind — are a threat at the border?

Coyotes are a thing in smuggling — just not, you know, the dog kind

Typically, the types of “coyotes” you hear chatter about at the border aren’t the canine kind but instead people.

Colloquially, “coyotes” (the same word in English and in Spanish) are smugglers who bring migrants into the United States for a fee. The people being moved are generally doing so willfully, as opposed to human trafficking, where they’re being forced or coerced.

According to US Immigration and Customs Enforcement, smuggling is “the importation of people into a country via the deliberate evasion of immigration laws.” Just because people aren’t being trafficked doesn’t mean the journey is easy or safe. At least 7,200 people have died illegally crossing the border over the past 20 years (it’s not clear which of those have been with smugglers and which have gone on their own), and some estimates suggest that number could be much higher. Coyotes often have to pay a fee to drug cartels, which are also in on the game.

The fees coyotes charge has become increasingly expensive over time. Quartz estimates that migrants coming from Central America pay $4,000 to $10,000, but according to the New York Times, it could be as much as $15,000.

John Kelly, when he was Department of Homeland Security secretary, in 2017 actually bragged that an increase in coyote fees was evidence that the administration’s immigration policy was working:

Does Trump think the problem is actual coyotes?

The “believe it or not” comment seems to indicate that maybe Trump thinks, or thought at least for a second, that canine coyote crossings at the border are a problem. The president was reading from prepared remarks — remarks that, presumably, he didn’t prepare himself — and seems to have ad-libbed.

There are in fact a lot of canine coyotes in North America. A study this year found that the geographic distribution of coyotes in the region has “dramatically expanded” since 1900, reaching every US state, multiple Canadian provinces, and south of Mexico and into Central America. In other words, actual coyotes are moving the opposite direction of the one Trump’s worried about.

Study: Medical bankruptcies may not be as common as thought

Stop the World and Melt With You: Scientists Predict Dying Sun...