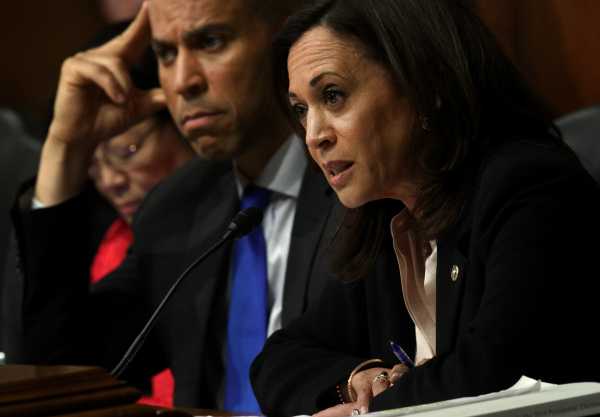 Democrats have been divided about what exactly to do about the findings of special counsel Robert Mueller’s report, which puts the onus on Congress to decide whether to impeach President Donald Trump. Most 2020 Democrats would rather defeat Trump than impeach him. So in the meantime, the three senators are joining Democrats’ new strategy: calling for Barr to step aside.

“Barr has shamed the office of attorney general with his partisan approach. I think he should resign,” Warren told Vice News’s Matt Laslo on Wednesday.

Walking out of the Senate Judiciary Committee hearing where she questioned Barr on Wednesday, Harris had a one-word response when NBC’s Frank Thorp asked her if Barr should resign.

“Yes,” Harris said, before walking away.

Booker tweeted that Barr “needs to step down,” adding, “Attorney General Barr answers to the American people — not to President Trump — and over the past 24 hours it’s become clear that he lied to us and mishandled the Mueller Report.”

After the new revelation that Mueller wrote Barr a letter criticizing how the attorney general portrayed his report’s findings, House Democrats say the attorney general is acting too sympathetic to President Donald Trump, and should be serving the interest of the United States rather than the president. Now presidential candidates are getting on board too.

Fellow 2020 contender and former US Department of Housing and Urban Development Secretary Julian Castro and former Rep. Beto O’Rourke have also called on Barr to resign, but Warren, Harris, and Gillibrand’s calls have more weight because they are sitting senators.

Warren has been aggressively calling on Congress to act after the Mueller report’s release last month. She was the first presidential candidate to call on Congress to begin impeachment proceedings after Mueller’s report was released to the public. Harris, a member of the Senate Judiciary Committee, said “Congress should take the steps towards impeachment” during a recent CNN town hall. Others have joined them, including Castro and Rep. Seth Moulton.

Gillibrand, for her part, has been more hesitant to call for impeachment, saying last month that Mueller should first testify both publicly and privately with Congress before a final decision is reached.

By refocusing their attacks on Barr, Democrats can sidestep the explosive issue of impeachment for now, and focus on taking incremental steps to respond to Barr and the Trump administration. But that also avoids the main question of how they should respond to the most damning information about President Trump in Mueller’s report.

Impeachment could be politically disastrous for Democrats, which is why they’re treading lightly. As the Trump administration aggressively fights back by refusing to comply with all of Democrats’ subpoena requests, going after Barr and his misleading representation of the Mueller’s report could be a good place to start.

A growing number of Democrats are calling on Barr to resign

As Vox’s Emily Stewart reported, the Mueller report outlined 10 potential instances of obstruction of justice by Trump, including his decision to fire FBI Director James Comey and his attempts to oust the special counsel. But Mueller declined to make a determination on whether the president committed criminal obstruction of justice and instead left the decision up to Congress.

House Speaker Nancy Pelosi hasn’t green-lit proceedings, and so far has not called on Barr to resign. But some of her committee chairs haven’t kept quiet; on Wednesday, House Intelligence Chair Adam Schiff said Barr should step down.

Barr, “in the interest of the department, should step down, but I have no expectation that he will,” Schiff told CNN’s Alisyn Camerota in an interview. “For an ordinary citizen, we might consider whether that’s perjury, but it’s worse when it comes from the attorney general of the United States, because it means the public cannot have confidence in what he says.”

“His job is to uphold the Constitution, to represent the people of the United States as the chief law enforcement officer of this country, and I think he’s behaved in a way that demonstrates he fundamentally misunderstands that responsibility … and is acting more like he works for Donald Trump,” Cicilline said. “It’s why I think he should not be the attorney general.”

A Chinese Photographer’s Secret Installations Inside His Parents’ Home |