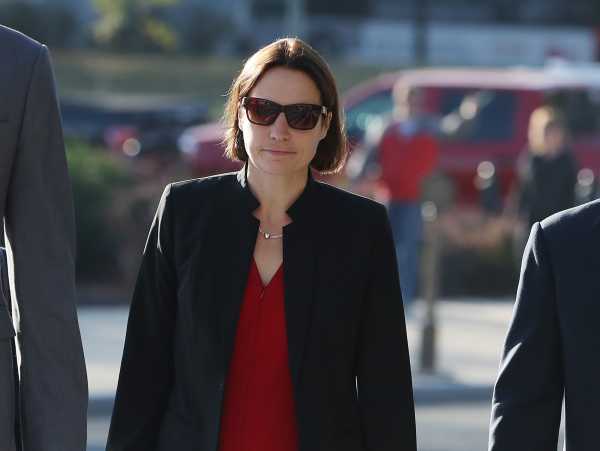 At this July 10 sit-down between Trump administration officials and Ukrainian officials, Hill said, Ambassador to the EU Gordon Sondland “blurted out” that there was an agreement: Ukraine’s president would get a meeting with President Donald Trump, if Ukraine agreed to launch certain investigations.

Hill testified that National Security Adviser John Bolton reacted very badly to this — first ending the meeting, and later telling her, in rather colorful terms, to report it to the NSC’s lawyer, John Eisenberg.

“He told me, and this is a direct quote,” Hill said, “‘You go and tell Eisenberg that I am not part of whatever drug deal Sondland and [acting White House Chief of Staff Mick] Mulvaney are cooking up on this.’”

Hill was the Trump administration’s top National Security Council official handling European and Russian issues until she left her post soon after this controversial meeting. That means she was already out of the picture by the time of Trump’s July 25 phone call with the Ukrainian president, and the holdup of hundreds of millions of dollars in military aid for Ukraine. So she couldn’t shed much light on those topics.

But her testimony on the events she did witness certainly gives the sense that she thought something was dreadfully amiss regarding Ukraine policy in the Trump administration.

She also pointed to a deeper involvement of the acting White House chief of staff, Mick Mulvaney, than has been known so far.

The meeting in question, on July 10, brought two of President Volodymyr Zelensky’s top advisers, Andrey Yermak and Oleksandr Danylyuk, to the White House, to meet with Bolton, Hill, and other officials from the NSC. The now-famous “Three Amigos” who had taken on a major role in directing Ukraine policy — Sondland, Special Representative to Ukraine Kurt Volker, and Energy Secretary Rick Perry — also attended.

At first, Hill said, the meeting was ordinary. The Ukrainians asked for advice on streamlining their own national security council. They also were pressing their demand for a White House meeting between Trump and Ukrainian President Volodymyr Zelensky — but Bolton was unwilling to commit to one yet.

That, Hill says, is when Sondland “blurted out: Well, we have an agreement with the Chief of Staff for a meeting if these investigations in the energy sector start.”

“We all kind of looked up and thought that was somewhat odd,” Hill testified, and Bolton “immediately stiffened and ended the meeting.”

“He said: Well, it was very nice to see you, you know, I can’t discuss a meeting at this time,” Hill went on. “It was very abrupt.”

Sondland, however, asked both the Americans and the Ukrainians to move with him to another room, to discuss next steps. Bolton chose not to go. But he told Hill, in her recounting: “Go down to the Ward Room right now and find out what they’re talking about and come back and talk to me.”

She did so, and she recounted what she’d heard to the impeachment investigators: “Ambassador Sondland, in front of the Ukrainians, as I came in, was talking about how he had an agreement with Chief of Staff Mulvaney for a meeting with the Ukrainians if they were going to go forward with investigations. And my director for Ukraine was looking completely alarmed.”

Hill said she then cut in and told Sondland that they couldn’t talk about that in front of the Ukrainians. But, Hill continued, “Ambassador Sondland cut me off, and he said: We have an agreement that they’ll have a meeting.”

Finally, they got the Ukrainians to leave the room. And then, Hill recounted, Sondland talked about discussions he’d had with Mulvaney and Rudy Giuliani on this subject. Hill had insisted planning for such a meeting had to go through the proper process, after which Sondland backed off.

Afterward, she said she reported back to Bolton, who told her: “You go and tell [NSC lawyer John] Eisenberg that I am not part of whatever drug deal Sondland and Mulvaney are cooking up on this.”

Hill also testified that it was “apparent” to her at this point that Sondland’s reference to investigations “in the energy sector” was code for Burisma, the Ukrainian energy company Hunter Biden had sat on the board of — in part because Rudy Giuliani had been saying as much on television for some time.

Bolton, she says, was aware of this as well. “In Ambassador Bolton’s office, when I was meeting with him, the television was always on,” Hill testified. “And it was usually on Fox News.”

All this means, according to Hill’s account, that an early quid pro quo was communicated to the Ukrainians, weeks in advance of Trump’s now-infamous phone call with Zelensky on July 25: if they wanted a White House meeting for Zelensky, they had to agree to investigate Burisma.

Trump administration officials like Sondland and Volker continued to communicate this quid pro quo to the Ukrainians through July and August. (Later, at the end of August and in early September, Sondland conveyed an even broader quid quo pro — saying that hundreds of millions of dollars in military aid to Ukraine also hinged on the investigations Trump wanted.)

Another interesting bit of Hill’s testimony is that she suggested Sondland was working with Mulvaney, the acting White House chief of staff, on this. Sondland has attempted to claim the demand for investigations was entirely coming from Rudy Giuliani. But, per Hill, the very top White House staffer underneath the president — Mulvaney — was knee-deep in this too.

Hill said that, at an earlier point, Sondland even managed to circumvent the NSC’s process to add a paragraph to a letter Trump was sending to Zelensky. “Ambassador Sondland coordinated on that letter directly with the Chief of Staff,” Hill said. This suggests, again, that Sondland had juice in the highest levels of the White House — and that he wasn’t, as some Trump defenders have begun suggesting, freelancing or working on his own.

The Best and Worst of the 2018 Super Bowl Commercials |

The Latest: Reports: Zuckerberg to testify before Congress