Home Politics Hannity’s surprising advice to Trump on Rosenstein: “Under zero circumstances should the... 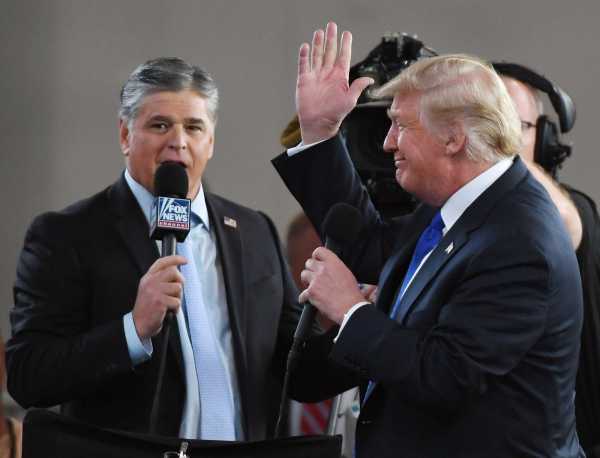 Sean Hannity has a perhaps surprising take on a report that Deputy Attorney General Rod Rosenstein suggested secretly taping President Donald Trump and invoking the 25th Amendment to remove him from office: It’s a trap.

The Fox News host — who reportedly speaks with the president as often as daily — reacted in Friday’s episode of his show, Hannity, to a report from Adam Goldman and Michael Schmidt at the New York Times that Rosenstein broached the idea last year after FBI Director James Comey was fired. The report appeared to be based, in part, on memos written by former FBI Deputy Director Andrew McCabe.

Rosenstein has denied the Times’ report, and there have been conflicting reports that his remarks were made sarcastically and in jest. Whatever the case, Hannity is warning Trump against acting.

“I have a message for the president tonight,” Hannity said on Friday. “Under zero circumstances should the president fire anybody.”

The host said that he has “multiple sources” confirming that the president’s enemies are “hoping and praying” that Trump fires someone so they can turn it into a scandal. “The president needs to know it is all a setup,” Hannity said. “He needs to know that regardless of whether he steps in or not, and I would argue he should definitely not, the deep state tonight is crumbling from within at this very hour.”

Hannity said that if anyone should act, it’s Attorney General Jeff Sessions, with whom Trump has a tenuous relationship. “Where are you tonight?” he asked. He seems to believe Trump’s enemies in the so-called “deep state” are trying to bait him into firing Rosenstein, a maneuver that, as Vox’s Andrew Prokop notes, would have a potentially “enormous” political fallout.

That, in turn could prompt a “crisis over the Russia probe and the rule of law” — one Hannity presumably wants to avoid.

Fellow Fox News host Laura Ingraham broke with Hannity and on Friday called for Rosenstein to be fired that same day in a pair of tweets that appear to have since been deleted. Other conservatives, however, also seemed to doubt the Times’ reporting.

South Carolina Republican Sen. Lindsey Graham warned Trump “BEWARE” of anything coming out of the Times.

“It seems outrageous,” former Congressman and current Fox News contributor Jason Chaffetz said of the report in an appearance on the network on Friday. “I can’t imagine any plausible scenario in which that would even have a chance to be true.”

There’s been some chatter about whether Rosenstein was joking

Since the Times’ story broke on Friday, there’s been some confusion about the context in which Rosenstein made the remarks about wearing a wire to tape the president and invoking the 25th Amendment.

Devlin Barrett and Matt Zapotosky at the Washington Post reported separately on Friday that Rosenstein was rebutting a suggestion by McCabe that the Justice Department open an investigation into the president. “What do you want to do, Andy, wire the president,” one person told the Post Rosenstein said during the conversation.

NBC News also reported that the deputy attorney general was joking. Even a person in the room at the time told the Times the wire comment was made “sarcastically.”

NBC News also reports that McCabe’s memo written after the meeting say that Rosenstein “raises 25th amendment,” but that another memo written by FBI lawyer Lisa Page makes no such mention.

Rosenstein has fiercely denied the Times’ story. In one statement, he said the report is “inaccurate and factually incorrect” and placed by “anonymous sources who are obviously biased against the department and are advancing their own personal agenda.” He said there is “no basis” to invoke the 25th Amendment.

He reiterated his denial in a second statement on Friday. “I never pursued or authorized recording the President and any suggestion that I have ever advocated for the removal of the President is absolutely false,” he said.

The New York Times is standing by its reporting.

Trump hasn’t yet commented directly on Rosenstein or the Times’ reporting. “You’ve seen what happened in the FBI and Department of Justice,” Trump said at a rally in Springfield, Missouri on Friday. “The bad ones, they’re all gone. They’re all gone. But there is a lingering stench and we’re going to get rid of that, too.”

Phase One of China-US Trade Deal Agreed, to Be Signed at...

eBay is suing Amazon over an alleged “scheme” to steal its...