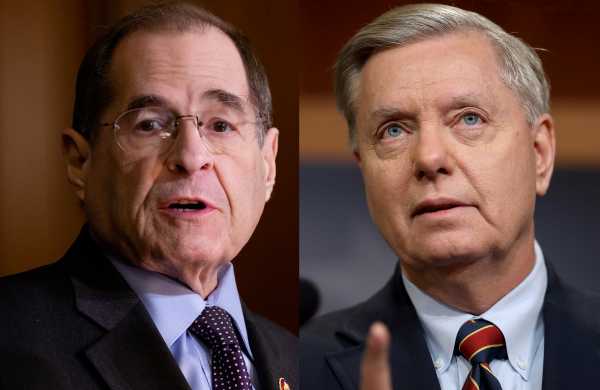 Attorney General Bill Barr released a four-page summary of special counsel Robert Mueller’s report on the Russia investigation Sunday afternoon, and the partisan divide between top Democrats and Republicans was abundantly clear in their responses on Twitter.

Shortly after Barr’s summary was given to Congress, House Judiciary Committee Chair Jerry Nadler (D-NY) said his committee would call on the attorney general to testify.

“In light of the very concerning discrepancies and final decision making at the Justice Department following the Special Counsel report, where Mueller did not exonerate the President, we will be calling Attorney General Barr in to testify before House Judiciary in the near future,” Nadler tweeted.

But House Democrats’ call for more answers from Barr and the full release of the Mueller report was not echoed by Nadler’s Republican counterpart on the Senate Judiciary Committee.

In response to the four-page summary, Chair of the Senate Judiciary Committee Lindsey Graham (R-SC) tweeted that President Donald Trump had been exonerated, adding that it was “time to move on.”

“Bad day for those hoping the Mueller investigation would take President Trump down,” Graham tweeted. “Great job by Mr. Mueller and his team to thoroughly examine all things Russia. Now it is time to move on, govern the country, and get ready to combat Russia and other foreign actors ahead of 2020.”

Even without being briefed on the full report, Graham was ready to make a judgement: not guilty.

But Nadler wasn’t so ready to give Trump the all-clear.

“Seems like the Department of Justice is putting matters squarely in Congress’ court,” Nadler tweeted. The House Judiciary chair also had a lot of questions. He was not satisfied with Barr’s summary of the Mueller report, especially given the ambiguity of Mueller’s finding, which is quoted in the letter, that “while the report does not conclude that the President committed a crime, it also does not exonerate him.”

In addition to promising to call Barr up to testify in front of Congress, Nadler reiterated his call to make the full Mueller report available to the public.

“Special Counsel Mueller clearly and explicitly is not exonerating the President, and we must hear from AG Barr about his decision making and see all the underlying evidence for the American people to know all the facts,” Nadler tweeted, adding, “In light of the very concerning discrepancies and final decision making at the Justice Department following the Special Counsel report, where Mueller did not exonerate the President, we will be calling Attorney General Barr in to testify before @HouseJudiciary in the near future.”

So, whereas Graham characterized Mueller’s report as the last chapter in the Trump-Russia saga, Nadler said it was only the beginning.

Barr put out a four-page summary of the Mueller report. Democrats want to see the whole thing.

On Friday, Mueller wrapped up his nearly two-year investigation into Russia’s meddling in the 2016 election. Mueller was examining two key things: whether the Trump campaign conspired or colluded with Russia during its election meddling and whether the president obstructed justice during his first months in office.

On the first point, Mueller found the Trump campaign didn’t conspire with Russia in 2016. But the second issue of obstruction is less clear cut. One of the big developments we learned Sunday is that Mueller left it up to Barr to determine whether Trump had committed obstruction of justice.

“In cataloging the President’s actions, many of which took place in public view, the report identifies no actions that, in our judgement, constitute obstructive conduct, had a nexus to a pending or contemplated proceeding, and were done with corrupt intent,” Barr wrote.

He adds that each of Trump’s actions would have to be proven beyond a reasonable doubt to establish that the president committed an obstruction of justice offense.

It is worth noting that neither Graham or Nadler has seen the full Mueller report yet. The full details are still under wraps at the Department of Justice, where officials still need to determine what they can release publicly.

Nadler and House Democrats’ crusade to make the Mueller report public has won them a group of unusual allies among House Republicans, and the House recently voted unanimously on a resolution to make the report public. The reason House Republicans are so on board? They — like Graham — believe Mueller’s report exonerates Trump, and they want the full details to back it up.

But there’s been little appetite from Senate Republicans to do the same. Graham’s response shows he’s willing to take Barr’s conclusions at face value — and he has not yet called for the full release of the Mueller report. Nadler, however, wants to get to the bottom of why Barr and Rosenstein made the obstruction of justice determination that they did.

If there’s one thing we know for sure, House Democrats see the Mueller report release as a beginning, not an end. And don’t expect the partisan fighting surrounding it to go away anytime soon.

Thierry Henry to Bordeaux? The challenges he would face there

It was a bad day in court for Donald Trump’s efforts...