Home Politics How a march at the US-Mexico border descended into tear gas and... 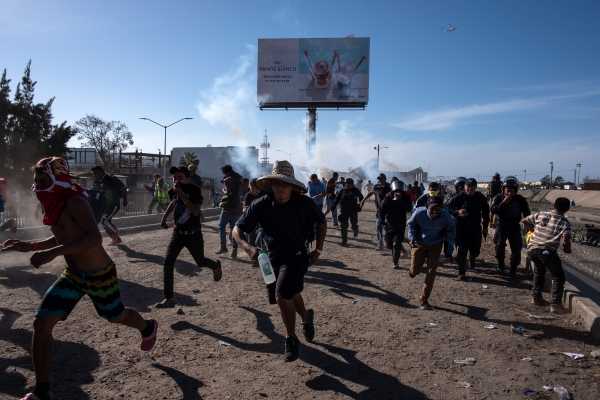 A planned peaceful march by the migrant “caravan” broke down on Sunday at the US-Mexico border in Tijuana, as groups of desperate people attempted to cross the border en masse — escalating into US Border Patrol agents firing tear gas that spread for nearly a kilometer through a crowd that included hundreds of asylum seekers, including children.

One or more people threw rocks at Border Patrol agents, who responded with tear gas and rubber bullets. The San Ysidro Port of Entry, the biggest official border crossing into the US, remained completely shut down in both directions during the unrest and for hours afterward.

The violence was the culmination of a situation that’s been deteriorating for over a week, after caravan members began to arrive in a city that’s already hosting thousands of asylum seekers waiting to cross legally into the US at San Ysidro. The stated purpose of Sunday’s march — for caravan members to be allowed to seek asylum in the US, or to meet with a representative of the US government — reflected the growing desperation and frustration of Tijuana’s waiting asylum seekers.

The unrest and tear gas aren’t simply the US government’s response to the arrival of the caravan. Nor were they directly related to a pending agreement between the US and the incoming Mexican government, reported Saturday, that would force asylum seekers to remain in Mexico while the US processes their claims.

The caravan’s weeks-long journey has come to an end just as pressure is rising, across the border. Trump’s border policy has squeezed asylum seekers at both ends: Officials stress that migrants ought to present themselves legally at ports of entry, while asylum seekers at ports are forced to wait days or weeks for entry to the US, and President Donald Trump himself says they shouldn’t be coming at all.

Trump has been portraying the US-Mexico border as in crisis since the spring, but the crisis (at least in Tijuana) has finally arrived. Each side of the US political debate perceives a different emergency: Trump and conservatives see an invasion of hostile, criminal forces, while his critics see an unprovoked attack on vulnerable families. But both views reflect the same underlying crisis: that so many asylum seekers, exhausted and desperate, are on the doorstep of the US, trying to reconcile their legal right to seek asylum with the reality that they’re not going to be allowed in “the right way” anytime soon.

What happened during Sunday’s march and port shutdown

Pressure on the San Ysidro port has been building for months

The chronology above makes it clear that what happened wasn’t a planned incursion by “the caravan” into the US — or even the first attempt by caravan members to seek asylum in the US. What happened is that people desperate for entry into the US took matters into their own hands — and US Border Patrol officials reacted with force.

But to understand how people who arrived in Tijuana barely a week ago are already so desperate, you have to understand that thousands of people were already waiting to seek asylum in the US before the caravan even began to arrive.

The San Ysidro port of entry is the most common place for Central Americans to seek asylum in the US, because it’s so large and because the route to Tijuana is safer than traveling through northeast Mexico into Texas. But for months, the number of asylum seekers going to San Ysidro has outstripped the number the US actually allows in to seek asylum.

Citing resource constraints, the US allows 60 to 100 asylum seekers — or fewer — into San Ysidro each day. An unofficial wait list of hundreds of people over the summer ballooned to thousands this fall. Before the caravan arrived, wait times stretched to two months, and the migrant shelters in Tijuana were already near capacity.

Many of the caravan members have been put up in a sports complex in Tijuana that’s been converted into a temporary shelter. Over the weekend, rains flooded the sports complex. The local government and nonprofits have struggled to feed everyone.

The mayor of Tijuana — possibly using the issue for his own benefit — has said repeatedly that he doesn’t have the money to support so many asylum seekers and has demanded that the national government give him more funds.

Many migrants in the caravan weren’t expecting the wait or the conditions. They’ve already been traveling for weeks, often with children in tow, with the hope of getting asylum in the US. In many cases, they’ve had the mistaken expectation that asylum would be granted immediately after they arrived. That hasn’t happened, and they’re getting desperate. And desperate people do desperate things.

Sunday’s events in Tijuana have alarmed both conservatives and liberals in America, for totally different reasons. Conservatives look at reports of migrants throwing rocks and conclude that the border truly is under attack, and that Trump has been right about the character of the caravan (“stone-cold criminals”) all along.

Liberals, meanwhile, have focused on images of families running away from tear gas and been horrified that the US government would act so cruelly toward people trying to seek asylum, which is legal under US law.

Tear gas is considered a chemical weapon under international law, making the US government’s response seem all the more hostile. But it also highlights the strangeness of the role that Border Patrol is playing right now: It’s a domestic law enforcement agency that’s working in concert with law enforcement in another country to prevent people from crossing a border.

But this isn’t domestic law enforcement: The tear gas canisters clearly crossed an international border, and their aim, working in concert with Mexican officials, was to prevent people from being able to step onto US soil (at which point the US would be obligated to hear their asylum claims without turning them back under current law).

The fundamental problem is that both countries — the US and Mexico — are dealing with a large and increasingly desperate group of people. Many of those people are families and small children. Some of those people responded to desperation by attempting to cross into the US between ports of entry, which is a federal misdemeanor; a few reacted by throwing things at Border Patrol agents massing against them.

The US was successfully able to dispel the crowds Sunday. But there’s no indication that the situation in Tijuana — the waiting, the poor conditions, or the desperation — is going to get any better on its own soon.

Nineteen Killed in Militia Attack on Village in DRC – Reports

Rob Cross believes his best is yet to come in this...

My Family Celebrates All the Holidays |