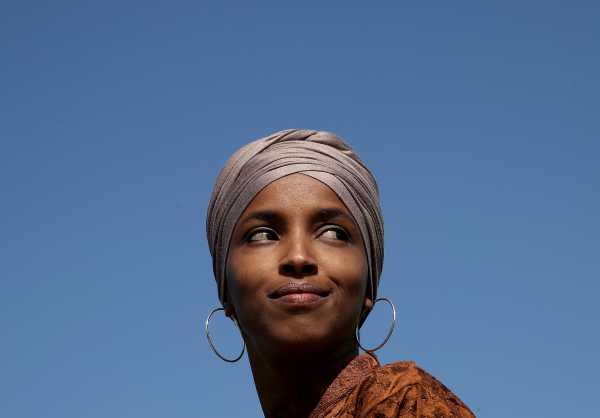 If a recent viral video is to be believed, Rep. Ilhan Omar (D-MN) wants to turn the FBI loose on white guys.

“Our country should be more fearful of white men,” she says in the footage, which currently has more than 2.7 million views on Twitter alone due to a viral tweet from a Daily Caller reporter. “We should be profiling, monitoring, and creating policies to fight the radicalization of white men.”

Sen. Marco Rubio (R-FL) has already condemned it: “I am sure the media will now hound every Democrat to denounce this statement as racist. Right?” he asked rhetorically.

The problem is the quotes are taken out of context. The full interview clip — from a February 2018 video with Al Jazeera — makes clear that Omar is not calling for FBI surveillance of white men. She’s actually making a semi-sarcastic point about the way Muslims like her have been unfairly treated as terrorism risks by American politicians and law enforcement. It’s a legitimate point, albeit phrased in a particularly inartful and awkward fashion.

The lesson from all this is not that Omar is some kind of anti-white bigot, but that bad-faith distortions can quickly make their way into the US Senate and be used to smear a Congress member who is already being singled out for racist attacks by the president.

The original footage of Omar comes from a February 2018 video with Al Jazeera. Omar, then a candidate for Congress, sat down for an interview with host Mehdi Hasan to talk about (among other things) being Muslim in America.

About halfway through the interview, Hasan asks Omar about Islamophobia, and particularly the argument that it’s justified because, some argue, Muslims are more likely to be terrorists. Omar’s response is to argue that if people were really afraid of terrorism, they’d be better off focusing law enforcement energies on white American men.

Here’s what both Hasan and Omar said:

The entire exchange is at 5:52 in the below video:

In context, it’s clear that Omar is not seriously arguing for a surveillance regime targeting white men. The “I would say” preface and “if fear was the driving force” line make it clear her comment is a response to people trying to justify Islamophobia as being legitimate, not affirmatively stating a position that everyone should be afraid of white men as a group.

She’s pointing out a double standard: Terrorism committed by white men has killed more Americans in recent years than terrorism committed by Islamist extremists, but many people continue to focus on the threat posed by Muslims as a group. If Islamophobia really were driven by fear, as Hasan’s devil’s advocate question implies, then people “should be more afraid of white men.” They aren’t, so the policy isn’t legitimately rooted in fear.

Omar’s office declined to comment on the video and surrounding controversy. But her core factual claim is correct: Violence by right-wing extremists, who are overwhelmingly white and male, really is a bigger problem in the United States today than jihadism.

According to data from the Anti-Defamation League, a Jewish anti-hate group, right-wing extremists were responsible for every documented killing by a political extremist in the United States in 2018. In Senate testimony this week, FBI Director Chris Wray said “a majority of the domestic terrorism cases that we’ve investigated are motivated by some version of what you might call white supremacist violence.”

Granted, Omar’s phrasing was not as artful as it could be. She has a habit of saying things that when taken out of context sound really bad. But the full footage makes it obvious she’s not attacking white men as a group — she’s calling for the benefit of the doubt extended to a generic white man, to not be blamed for the actions of a handful of radicals who share their background, to be extended to a generic Muslim instead.

Her critics did not engage with this point honestly.

The original source for the misleading video is the Christian Broadcasting Network (CBN), a conservative evangelical outlet. In a CBN article by prominent journalist David Brody, Omar is quoted in a way that excises the context and transmutes her condemnation of Islamophobia into an attack on white men:

This could be an honest mistake of the sort journalists inevitably make. Except that CBN also put out a video that makes the same edit, cutting out the context between “more fearful” and “we should be profiling” — which is less than a sentence — to make it look like she’s actually advocating profiling.

This edited video was then tweeted by Molly Prince, a politics reporter at the right-wing news site the Daily Caller. Prince’s tweet flew around right-wing internet, with retweets from major figures like Glenn Beck, Dana Loesch, and Dave Rubin; currently, it has around 11,000 retweets. It’s also the source for Rubio’s allegation that Omar’s comments were racist:

What you see here, then, is the real-time anatomy of a smear.

A right-wing media outlet goes after a Democrat — and not just any Democrat, but a black Muslim woman who has been the target of relentless racist harassment by the president. The smear gets picked up on social media, where absent the full video context you can’t tell that it’s a distortion of her meaning. It then goes viral, where a sitting US senator finds it and broadcasts it to his followers — bringing what was originally a fringe smear into the mainstream.

This isn’t the first time this has happened. It’s not even the first time it’s happened to Omar. And as long as there are bad-faith actors in conservative media who are willing to lie and amplify lies, it won’t be the last.

Rex Tillerson gets to keep the big tax break he got...

Cork and Galway reveal new jerseys for the 2019 season