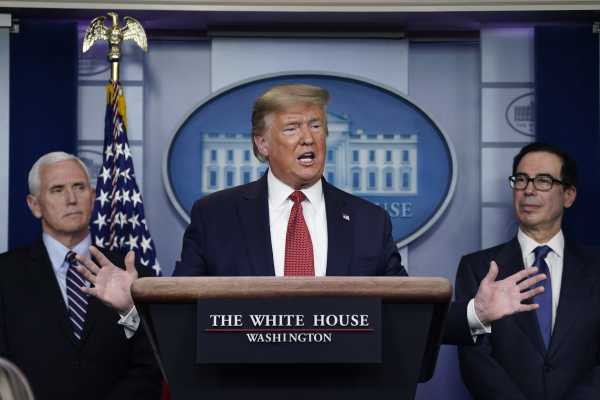 President Donald Trump sent a letter to state governors on Thursday saying that his administration is developing new, more relaxed social distancing guidelines for state and local officials, even as the country deals with the worsening coronavirus pandemic.

In the letter, Trump praised the governors for their role in tackling challenges brought on by the Covid-19 crisis and acknowledged the “long battle ahead” — before pivoting to his desire to return to normal. He noted:

Trump’s vision for relaxing social distancing involves using expanded testing to identify those infected and robust surveillance to monitor the spread of the virus, as well as tailoring restrictions on a geographic basis. “Using these data-driven criteria, we will suggest guidelines categorizing counties as high-risk, medium-risk, and low risk,” the letter reads.

While testing capacity in the US has increased in recent days, it still lags far behind other developed countries, according to public health experts. While drive-through testing sites and laboratories continue to work overtime, increasing demand for tests means providers are still rationing them, which could ultimately put a crimp in Trump’s social distancing timeline.

Trump, however, seems eager to relax restrictions, and said in the letter that Americans are “hoping the day will soon arrive” when things can return to normal. He said on Tuesday that he hoped to “restart the economy” by Easter Sunday, which is on April 12. He said he chose the date because he “thought it was a beautiful time. A beautiful timeline,” he told reporters, suggesting that he wanted to see full churches for Easter services.

Trump’s letter comes a day after more than 14,000 cases of coronavirus were reported in the US, the highest number of new cases reported in a single day in any country since the pandemic began. As of March 26, there are more than 76,000 confirmed cases in the US, resulting in upwards of 1,000 deaths, according to the Johns Hopkins University tracker.

The virus has hit larger urban centers, like New York City, particularly hard. States have had varying experiences with coronavirus thus far, and each have taken varying steps, from statewide shelter-in-place orders to closing schools and nonessential businesses in order to mitigate the effects of the pandemic and “flatten the curve.”

But without robust testing to trace and isolate exposed individuals, many public health officials have warned that easing social distancing guidelines too early would result in more infections — and subsequently more deaths — from Covid-19, the disease caused by the novel coronavirus.

While the economy has been devastated by policies aimed at stopping the spread of the coronavirus, epidemiologists say that ending social distancing too early could trigger a large spike in cases. That could not only damage the economy but also make it much more likely that an already strained medical system could collapse, as Vox’s Brian Resnick explained:

US Official Claims Iran Missile Forces Across Country Are On Heightened...

$1 Billion Worth of Arms Sales to Saudi Arabia Approved by...