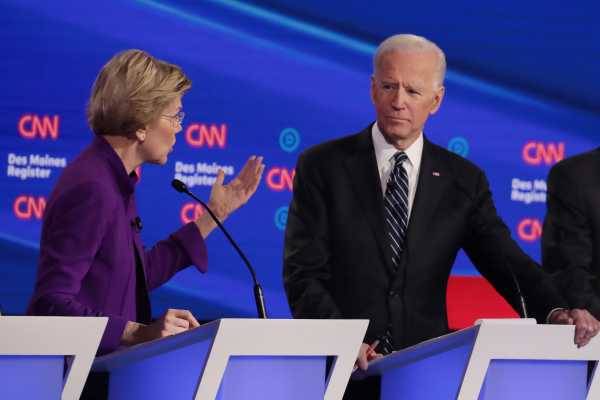 Sen. Elizabeth Warren has endorsed Joe Biden for president, marking a third day of high-profile endorsements for the former vice president, after Sen. Bernie Sanders and former President Barack Obama did the same earlier this week.

In a video message posted on Twitter Wednesday morning, Warren, a former 2020 presidential contender herself, said that Biden will “lead a government that works for the American people.”

“Joe Biden has spent nearly his entire life in public service. He knows that a government run with integrity, competence, and heart will save lives and save livelihoods,” she said. “And we can’t afford to let Donald Trump continue to endanger the lives and livelihoods of ever American. And that’s why I’m proud to endorse Joe Biden as president of the United States.”

In the video, Warren cites Biden’s response to the Boston Marathon bombing in 2013 and his involvement in the recovery from the financial crisis and the Great Recession as examples of his leadership during crises. She also spoke of working with him in setting up the Consumer Financial Protection Bureau — something the pair clashed over during one of the Democratic primary debates last year.

Warren and Biden have not always been on the same side of the issues. Beyond being rivals in the 2020 Democratic primary, the two were at odds over a 2005 bankruptcy bill Biden supported while he was a United States senator. As Vox’s Matt Yglesias explained, Warren opposed it so vehemently that it’s part of what got her into politics. During the primary, however, Biden backed Warren’s bankruptcy proposal in an apparent effort to make amends. In her endorsement video, Warren nodded to this — and to her disagreements with Biden.

“Among all the other candidates I competed with in the Democratic primary, there’s no one I’ve agreed with 100 percent of the time over the years,” she said. “But one thing I appreciate about Joe Biden is that he will always tell you where he stands. When you disagree, he’ll listen — and not just listen, but really hear you, and treat you with respect no matter where you’re coming from.”

It’s been a big week in endorsements for Biden. On Monday, Sen. Sanders endorsed him in a joint livestream with the two men, telling him “we need you in the White House” and pledging to do “all that I can to make that happen.” And on Tuesday, former President Obama, who has been reluctant to speak out too much during the primary, backed his former running mate as well.

“Joe has the character and the experience to guide us through one of our darkest times and heal us through a long recovery,” Obama said. “Joe was there as we rebuilt from the Great Recession and rescued the American auto industry. He was the one asking what every policy would do for the middle class and everyone striving to get into the middle class.”

Warren suspended her presidential bid in March and quickly came under pressure from both the Sanders and Biden camps to endorse one of the remaining candidates. She held out until Wednesday. The former vice president now has the backing of all of his major former rivals.

‘Not Happy With Him’: Trump Mulls the Fate of White House...