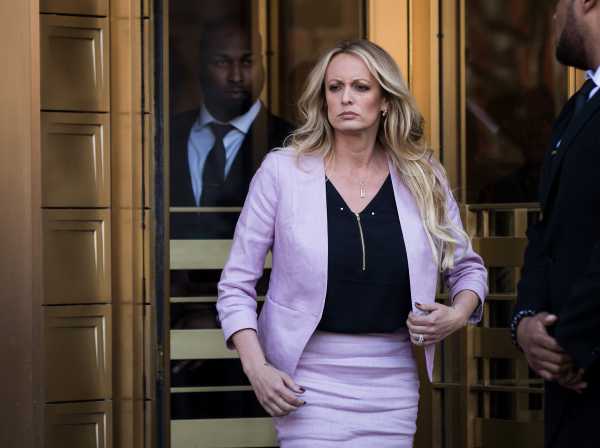 Daniels, whose real name is Stephanie Clifford, alleges she had an affair with Trump in 2006. She filed a lawsuit against the president in April, arguing he defamed her by suggesting she made up a claim that someone had threatened her in 2011 after she agreed to an interview about their alleged affair.

As Vox’s Jen Kirby explained at the time, Daniels said in March, during a 60 Minutes interview with Anderson Cooper, that a man approached her in 2011 while she was in a parking lot with her infant daughter. “A guy walked up to me and said to me, ‘Leave Trump alone. Forget the story,” she told Cooper. “And then he leaned around and looked at my daughter and said, ‘That’s a beautiful little girl. It’d be a shame if something happened to her mom.’”

Then on April 17, in an appearance on ABC’s The View, Daniels and her lawyer Michael Avenatti released a sketch of the man she said threatened her.

The next day, on April 18, Trump tweeted that the sketch was of a “nonexistent man” and a “total con job.” The tweet also contained another user’s tweet that had compared the sketch to Daniels’s husband.

After that, Daniels sued, seeking at least $75,000 in damages and saying she’d had to hire two bodyguards and has suffered reputational damage because of the tweet.

The suit was originally filed in a Manhattan federal court but was transferred to California at Trump’s lawyers’ request, according to the New York Times.

Judge James Otero, a George W. Bush appointee, dismissed the suit in a ruling filed in the US District Court in Los Angeles on Monday, determining that Trump’s tweet constituted “rhetorical hyperbole” protected under the First Amendment and “normally associated with politics and public discourse in the United States.”

The judge also ruled that Trump is entitled to attorney fees — in other words, Daniels has to pay his legal bills. It’s not clear what that cost will be, but as the Times notes, it could be significant: The case lasted for more than six months, and at least four lawyers were involved.

Charles Harder, a lawyer for Trump, in a statement called the ruling a “total victory for President Trump and total defeat for Stormy Daniels.” It’s certainly not what Daniels was seeking, but it’s not the end.

The lawsuit about Stormy Daniels’s NDA is still ongoing

This isn’t the only lawsuit Trump and Daniels are entangled in.

A separate legal battle over the $130,000 Trump’s then-lawyer Michael Cohen paid Daniels ahead of the 2016 election to keep quiet about her alleged affair with Trump is still not settled. (Trump’s team tried to release Daniels from the agreement in September and end the case, but Daniels and Avenatti didn’t go for it.)

Cohen pleaded guilty to eight federal charges in August, including campaign finance violations related to the Daniels payout, and he implicated the president in his actions, saying he made the payments “in coordination with and at the direction of a federal candidate for office” — meaning Trump.

Avenatti said in a statement that the “main case” relating to Daniels relates to the $130,000 NDA and said Harder’s claim of victory is an “outright lie.”

Daniels has not yet publicly commented on the ruling. In an interview with the Cut published on Sunday, she reflected on her newfound place in American culture and politics — and didn’t seem particularly thrilled about it.

“I started this just because I wanted to set the record straight and not be bullied. I really just wanted to save my own ass,” she said. “Now I’m in charge of saving the world. What the fuck?”

Trump reacted to the defamation lawsuit dismissal in a tweet on Tuesday, referring to Daniels as “Horseface” and calling her a “total con.”

Holding Out Hope for a North Korea Deal

In Japan, Trump pushes a hard line on trade — and...