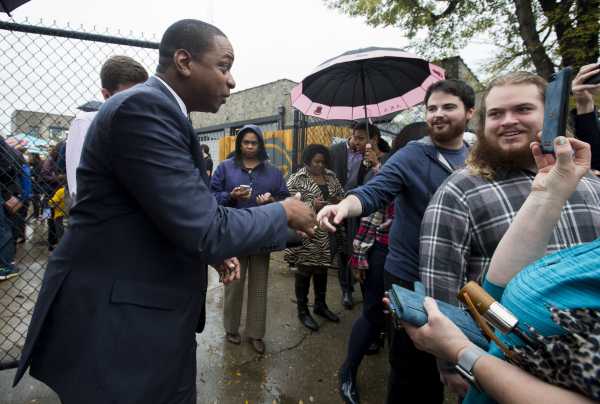 Justin Fairfax is in line to be governor of Virginia. But now he’s facing allegations of sexual assault.

Gov. Ralph Northam has been facing pressure to resign over a racist photo that recently surfaced from his 1984 medical school yearbook page. Fairfax, the state’s lieutenant governor and fellow Democrat, would be next in line if Northam does resign.

The first sexual assault allegation became public on February 3, when Patrick Howley of the conservative website Big League Politics reported that Vanessa Tyson, a professor of politics at Scripps College, had said she was sexually assaulted in 2004 by a campaign staffer who was now up for a “VERY BIG promotion” in Democratic politics. Howley, who was also the first to obtain the Northam yearbook photo, noted that Fairfax was a campaign staffer for presidential candidate John Kerry in 2004 and that he was now poised to become governor of Virginia.

On Wednesday, Tyson released a statement detailing her allegation. “What began as consensual kissing quickly turned into a sexual assault,” she wrote. “As I cried and gagged, Mr. Fairfax forced me to perform oral sex on him.”

Then, on Friday, February 8, a woman named Meredith Watson issued a statement through her attorney saying that Fairfax raped her in 2000, when the two were students at Duke.

Fairfax has denied both allegations. “I have never forced myself on anyone ever,” he said in a statement to the Washington Post on Friday.

The allegations come at a time of chaos in Virginia, as Northam faces calls to resign after the surfacing of the racist photo and a disastrous press conference in which he attempted to address it (on Friday, Northam reportedly told staff he would not be resigning). The story also serves as a reminder that accusations of sexual assault are not confined to one political party.

Liberals have long feared that conservatives would make use of the #MeToo movement to attack Democratic politicians, and the first allegation against Fairfax did come to light through conservative media. What happens now will be a test of how Democrats handle such allegations when they could be politically inconvenient for the party.

Fairfax, 39, is the second black person ever to win statewide elected office in Virginia. Elected in 2017, he gained greater national attention over the weekend as scandal engulfed Northam. Virginia Democrats and others praised him as a charismatic and effective politician, and politicians like Sen. Bernie Sanders (I-VT) had called for him to become governor.

Then the allegation surfaced.

“Imagine you were sexually assaulted during the DNC convention in Boston in 2004 by a campaign staffer,” reads what Big League Politics reports is a private post online by Tyson. “You spend the next 13 years trying to forget it ever happened. Until one day you find out he’s the Democratic candidate for statewide office in a state 3,000 miles away, and he wins that election in November 2017. Then by strange, horrible luck, it seems increasingly likely that he’ll get a VERY BIG promotion.”

According to Howley of Big League Politics, the post was shared by Adria Scharf, the executive director of the Richmond Peace Education Center in Virginia. Scharf has not responded to Vox’s request for comment.

Many details in the post match Fairfax’s biography. He was a staffer for John Kerry’s presidential campaign in 2004. Tyson works in California, a state thousands of miles away from Virginia. Fairfax and Northam were elected in 2017. And, of course, Fairfax could get a promotion if Northam decided to resign.

In a statement on Monday, Fairfax said that “the person reported to be making this false allegation” had approached the Washington Post around the time of Fairfax’s inauguration in 2018. “The Post carefully investigated the claim for several months,” the statement says. “After being presented with facts consistent with the Lt. Governor’s denial of the allegation, the absence of any evidence corroborating the allegation, and significant red flags and inconsistencies within the allegation, the Post made the considered decision not to publish the story.”

Meanwhile, Theresa Vargas of the Washington Post reported on Monday about the newspaper’s investigation into the 2004 incident:

According to Vargas, the Post did not find “significant red flags and inconsistencies within the allegations,” as Fairfax’s statement claimed.

Fairfax’s office released a follow-up statement Monday afternoon in response to the Post article. “The Washington Post, acknowledging it had no corroboration, just smeared an elected official,” the statement said. “We reiterate that this allegation is false.”

“We ask further,” the statement continued, “what other major elected official in the Commonwealth of Virginia would be smeared with sexual allegations that were presented without corroboration?”

In a press conference on Monday, Fairfax said he and the woman who spoke to the Post had “a 100 percent consensual” sexual encounter in 2004, according to the New York Times. He also seemed to blame his political rivals for making her allegation public.

Suggesting that supporters of Northam might be behind the publication of the accusation, Fairfax asked, “does anybody think it’s any coincidence that on the eve of potentially my being elevated that that’s when this smear comes out?” He later said he had “no indication” that Northam was involved. In Virginia, the governor and lieutenant governor are chosen separately, and Northam did not pick Fairfax as his running mate.

Fairfax also implied that Richmond Mayor Levar Stoney, a possible opponent for the 2021 Democratic gubernatorial nomination, might have had a role in publicizing the allegation, the Times reported. “The insinuation is 100 percent not true, and frankly it’s offensive,” Stoney told the paper.

On Wednesday, Fairfax released another statement in which he continued to deny the allegation but expressed support for survivors.

“I would like to encourage the media, my supporters, and others to treat both the woman who made this allegation and my family with respect for how painful this situation can be for everyone involved,” he added. “But I cannot agree with a description of events that I know is not true.”

Also on Wednesday, Tyson released a statement detailing the allegations, which she said would be her final public comment on the subject. After consensual kissing, Tyson wrote, Fairfax unzipped his pants and forced his penis into her mouth.

“I cannot believe, given my obvious distress, that Mr. Fairfax thought this forced sexual act was consensual,” she said in the statement.

“I am a proud Democrat,” she added. “My only motive in speaking now is to refute Mr. Fairfax’s falsehoods and aspersions of my character, and to provide what I believe is important information for Virginians to have as they make critical decisions that involve Mr. Fairfax.”

Tyson has now hired the same law firm that represented Christine Blasey Ford, who says that Supreme Court Justice Brett Kavanaugh sexually assaulted her when the two were in high school, NPR reported on Tuesday.

In a statement issued through her lawyer on Friday, Watson said that Fairfax raped her when the two were students at Duke.

“Mr. Fairfax’s attack was premeditated and aggressive,” the statement said. “The two were friends but never dated or had any romantic relationship.”

Fairfax strongly denied Watson’s allegation, saying in a statement to the Washington Post, “It is demonstrably false. I have never forced myself on anyone ever.”

“I demand a full investigation into these unsubstantiated and false allegations,” he added. “I will clear my good name and I have nothing to hide.”

Watson said in her statement that she had told friends about the incident at the time, in emails and Facebook messages now in her lawyer’s possession. Kaneedreck Adams, who lived near Watson in Duke on-campus housing in 2000, told the Post that Watson had come to her crying that year.

“She was upset,” Adams said. “She told me she had been raped and she named Justin.”

The allegations come on the heels of Northam’s yearbook scandal

The allegations come at a time of turmoil for Virginia Democrats. Last week, Northam inspired outrage from conservatives with confusing comments about a Virginia abortion bill. Appearing to describe what would happen if a child was born after a failed abortion, he said “the infant would be resuscitated if that’s what the mother and the family desired, and then a discussion would ensue between the physicians and the mother,” which some interpreted as a reference to infanticide.

Then on Friday, the Virginian-Pilot published a photograph from Northam’s medical school yearbook page, depicting a man in blackface and a man in a Ku Klux Klan costume. The photo had been circulating in right-wing media prior to the Virginian-Pilot’s publication, and Howley of Big League Politics may have been the first to publish it.

In the wake of the photo’s publication — and especially after a bizarre press conference in which Northam denied posing for the photo but said he had dressed up in blackface on a different occasion — many have called for the governor to resign and allow Fairfax to take his place.

On Sunday, Fairfax released a statement in which he did not explicitly call for Northam to resign, but said “we need leaders with the ability to unite us and help us rise to the better angels of our nature.”

The allegations against Fairfax, however, complicate matters. According to the Washington Post, Northam was meeting with his cabinet and other officials on Monday to decide whether he should resign.

When Northam admitted to wearing blackface, Democrats had an appealing alternative in Fairfax. Now the party will be forced to choose between a man who put a racist image on his medical school yearbook page and a man accused of sexual assault — or an as-yet-undetermined third option.

Virginia Attorney General Mark Herring, also a Democrat, is next in line after Northam and Fairfax. But on Wednesday, he admitted that he had worn blackface as a college student in 1980.

Historically, Democrats have responded far more aggressively to allegations of sexual misconduct than Republicans have. But this situation is new, and it is unclear how the party will respond. Whatever happens, however, will set a standard for how Democrats confront sexual misconduct accusations even when they come from an adversarial source — and when they concern a rising star who looked like he could help lead his party out of a crisis.

Antonio Conte’s Chelsea future: Is this the flaw in the club’s...