Home Politics Kelly Loeffler and 2 other senators are no longer being investigated for... 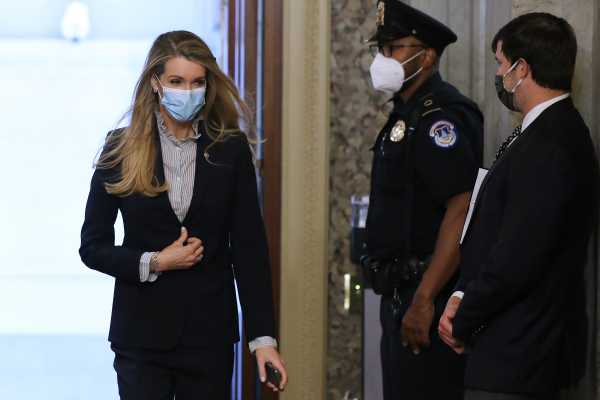 The Department of Justice is dropping its insider trading investigation into the coronavirus-related stock trades of Sens. Dianne Feinstein (D-CA), Kelly Loeffler (R-GA), and Jim Inhofe (R-OK), according to a Wall Street Journal report.

The department is still investigating trades made by Sen. Richard Burr (R-NC), however — as part of that investigation, a cell phone was seized after he was served a search warrant by the FBI on May 13 at his Washington, DC, residence.

The FBI, in conjunction with the Securities and Exchange Commission, began an investigation in late March into lawmakers who may have tried to profit from information received over the course of their Senate duties regarding the coronavirus.

Government officials and lawmakers are often privy to key information — which could potentially be used to profit in the stock market — that isn’t available to the public. For instance, the Senate Health Committee (which Loeffler sits on) hosted an all-members briefing on the coronavirus on January 24, before much of the American public fully understood the threat posed by Covid-19. Since the passage of the Stock Act in 2012, however, lawmakers are barred from using any nonpublic information to trade personal stocks. (Burr was one of just three senators to vote against the law.)

They are permitted, however, to own and trade stocks as long as they don’t act on any private information. And they are required to file financial

Burr, Feinstein, Loeffler, and Inhofe have maintained they’ve done nothing wrong; Loeffler and Inhofe were quick to claim the DOJ’s decision has exonerated them.

“As I’ve said all along, I wasn’t even at the briefing and do not make my own stock trades,” Inhofe said in a statement to the Oklahoman. “I did nothing wrong, and I’m pleased the Justice Department has exonerated me.”

“Today’s clear exoneration by the Department of Justice affirms what Sen. Loeffler has said all along: She did nothing wrong,” Loeffler spokesperson Stephen Lawson told Politico. “This was a politically motivated attack shamelessly promoted by the fake news media and her political opponent.”

In the wake of the Burr search warrant, all of the senators said they were cooperating with the FBI’s investigation. Feinstein told NBC News on May 14 that she had spoken to the FBI about her trading activity, and a Loeffler spokesperson told Vox on May 14 the senator had turned over documents and information to federal law enforcement officials.

Burr has asked for a Senate Ethics Committee investigation into his trading activity. That investigation continues — as does the FBI inquiry. It appears the senator is not out of the woods.

What we know about the senators’ stock trades

Lawmakers are required by law to report stock trades in regular

On February 13, Burr, who Roll Call estimates is the 154th wealthiest federal lawmaker, sold up to $1.7 million in stock transactions. In making those trades, Burr sold up to $150,000 worth of shares of Wyndham Hotels and Resorts. Wyndham’s stock dropped from $59.10 per share at the close on the day Burr sold it to a low of $21.59 on March 19, before rebounding. He also sold up to $100,000 in stock in Extended Stay America, an economy hospitality company.

Burr had been getting briefings on the coronavirus for several weeks before making the trades, and according to an NPR report, he said at a luncheon for a group called the Capitol Hill Club in late February that the virus was “more aggressive in its transmission than anything that we have seen in recent history,” likening it to the 1918 flu pandemic.

His brother-in-law, Gerald Fauth, a Trump appointee to the National Mediation Board, which mediates labor-management relations in the railroad and airline industries, also sold significant shares on the same day, according to a ProPublica report on May 6.

Loeffler has also drawn criticism for suspected insider trading related to the pandemic. When she was appointed in January, Loeffler instantly became the wealthiest senator currently in office. The Daily Beast first reported on March 19 that Loeffler had sold millions in stock within days of attending a February 24 Trump administration briefing on the novel coronavirus.

Loeffler reported a sale of stock owned jointly with Sprecher on the same day the Senate Health Committee, which she serves on, hosted a private, all-senators coronavirus briefing from Trump administration officials, including the CDC director and Dr. Anthony Fauci, head of the National Institute of Allergy and Infectious Diseases.

In total, Loeffler and her husband conducted 29 stock transactions in late February. Perhaps the one that most drew attention was buying between $100,000 and $250,000 in the technology company Citrix, which offers remote-working software. The software has become popular as people have transitioned to working from home during the pandemic.

Loeffler pushed back against the allegations in a March 20 tweet, saying that neither she nor her husband makes decisions about her portfolio.

Eyebrows were raised again in early February when the Atlanta Journal-Constitution reported that Loeffler had sold off $18.7 million in stock in Intercontinental Exchange (ICE), where she was formerly a longtime executive. Those transactions — though large in value — don’t necessarily have an evident connection to the pandemic. But they drew scrutiny because, as the New York Times reported, they hinted at an unusual compensation scheme from her former employer.

Inhofe, who chairs the Senate Armed Services Committee, sold up to $750,000 worth of stock, saying it was related to a “continuing divestiture plan.” Feinstein reported selling millions in stock just before the coronavirus-related market crash. The senator claimed she was not a party to the decision to sell and that the trades were made by her husband.

“Under Senate rules I report my husband’s financial transactions,” Feinstein said in a statement. “I have no input into his decisions. My husband in January and February sold shares of a cancer therapy company. This company is unrelated to any work on the coronavirus and the sale was unrelated to the situation.”

Although Feinstein, Loeffler, and Inhofe are no longer under investigation, the situation may yet give additional weight to reforms being pushed by some of their colleagues — particularly as the inquiry into Burr advances.

For instance, Sen. Elizabeth Warren (D-MA) introduced wide-ranging anti-corruption legislation in 2018 that would have banned lawmakers from owning individual stocks altogether. And HR 1 would tighten rules around lawmaker conflicts of interest, though it doesn’t specifically mention insider trading. While HR 1 passed the House last year, it has stalled in the Senate.

Falling Oil Prices are Tip of Iceberg as Protests Sweep Across...

Talking points ahead of the Community Shield