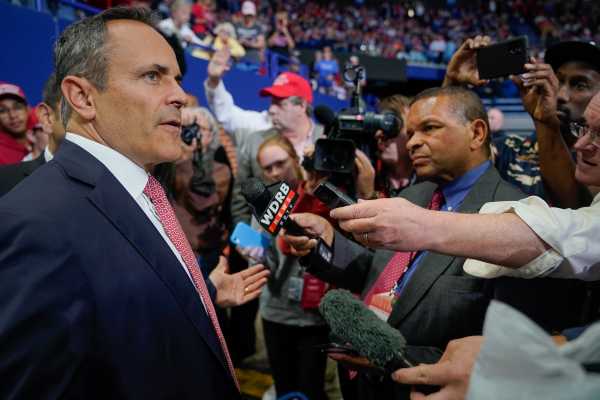 Kentucky’s Republican governor Matt Bevin lost reelection to Democrat Andy Beshear Tuesday, but he’s refusing to concede the election — all while his party floats a number of schemes, some more harebrained than others, to give him one last shot.

The race was extremely close; Beshear eked out a win by roughly 5,000 votes — with 49.19 percent of the vote to Bevin’s 48.83 percent. The Libertarian candidate John Hicks received 1.97 percent of the vote. The state Democratic Party and Beshear have already declared victory and Secretary of State Alison Lundergan Grimes, Kentucky’s chief election officer, also deemed Beshear the victor on Wednesday.

“My expectation is that [Bevin] will honor the election that was held tonight,” Beshear said in his victory speech on election night. “That he will help us make this transition. And I’ll tell you what, we will be ready for that first day in office, and I look forward to it.”

But Bevin isn’t accepting the results just yet, calling it a “close, close race.” He says he’ll take steps to ensure the results are accurate and claims there were reported “irregularities” — though unspecified — with voting in the state. It’s worth noting that Bevin, a much-disliked politician, was the only Republican to lose a statewide race in Kentucky this year; Republicans actually flipped two state positions — attorney general and secretary of state.

Bevin has the backing of Republican state Senate President Robert Stivers, who called Bevin’s refusal to concede “appropriate” and even floated the idea of using an extremely outdated constitutional provision that could ultimately allow the state’s Republican-controlled Legislature to decide the election results. (More on that below.)

On Wednesday, Bevin’s campaign announced that its first step would be to pursue a recanvassing of the results, a process that involves making sure machines in every county have accurately calculated vote totals and transferred them to the state. A recanvassing of votes is notably different from a recount, in which every vote cast is counted again. Kentucky does not have an automatic recount law on the books.

That’s not stopping Bevin from trying or Republicans from gaming out obscure ways they could ensure a Republican in the governor’s mansion.

Bevin has asked for a “recanvass” of the votes. That’s different from a recount in Kentucky.

Lundergan Grimes confirmed Wednesday that her office had received the recanvassing request from Bevin’s campaign.

In Kentucky, this is the first action a candidate would take to reevaluate results that are particularly close. What this means, plainly, is that the county election boards will examine the vote totals they received from each machine, make sure they were added correctly, and confirm that those figures were accurately shared with the state.

As Lundergan Grimes indicated, this process is expected to take place next Thursday, November 14. Both campaigns can send representation to observe the recanvassing as it happens.

It’s a process Bevin has participated in before. Bevin was actually part of another recanvassing during the 2015 election, when his opponent in the Republican gubernatorial primary, Rep. James Comer, called for one. That effort did not ultimately change the outcome and, as Beshear’s campaign was quick to point out on Wednesday, no recanvassings have ever led to a different result.

According to the University of Kentucky’s Election Law Society, there have been “modest” changes at best in the vote totals observed following past recanvassings, and the likelihood of 5,000 votes swinging a different way is exceedingly low.

A recanvassing, however, is not the same as a recount. While some states, including Alabama and Florida, will kick off a recount immediately if the vote totals for a position are within a specific margin of one another, Kentucky’s elections don’t operate that way.

And the state doesn’t make recounts easy to do.

Typically, a candidate would only be able to file for a recount if their campaign petitioned Franklin County Circuit Court to conduct one. If that petition is granted, the candidate would then have to fund the recount themselves and a judge would conduct it. Even then, the governor and lieutenant governor’s races are explicitly left out of the statute that outlines the procedure for recounts. According to the secretary of state, Bevin would have to file a contest of the election in order to prompt a recount.

While recanvassing is a pretty straightforward process, the Republican head of the Kentucky State Senate muddied the waters a bit when he claimed on Tuesday evening that the state’s legislature could determine the outcome of the election.

As vote totals rolled in, Senate leader Robert Stivers suggested that the results of this race could ultimately come before state lawmakers, a process that hasn’t been used to settle an election since 1899.

While Stivers may have gotten ahead of himself, it’s true that the legislature could have a role to play if Bevin decides to contest this election. In order to get to that point, a recanvassing would need to take place first and the results would need to be certified by the State Board of Elections. The board is set to certify these results in late November.

Within 30 days of the results getting certified, Bevin has the ability to contest it, though he’d have to specify exact reasons for why he was doing so, the Courier Journal notes:

If the contest moves forward, lawmakers would assemble an 11-person panel to hear the arguments on it and render a verdict. Once a contest has been filed, a recount could begin as well. According to a more than century-old constitutional provision, the full legislature would then weigh the committee’s decision and come to its own conclusion:

The language in the provision itself is a testament to how outdated it is: Kentucky doesn’t hold elections for lieutenant governor separately anymore — they are added as a joint ticket with the party nominee for governor, the result of a 1992 state constitutional amendment.

This is an extremely risky road for Republicans to go down — one that implies explicitly overturning the results of a democratic election. But it’s one that Stivers, at least, seems open to. Tuesday night, he argued that had the Libertarian candidate not run, Bevin would have won.

Even if this doesn’t happen, Democrats in the state are still on guard, worried that the Republican state legislature could use a special legislative session to strip Beshear of key executive powers before he is sworn in — a playbook Republicans legislators have used in North Carolina, Wisconsin, and Michigan.

4 big takeaways from a huge new report on sexual harassment...

Indian Gov’t Vows to Weed Out Cryptocurrencies From India