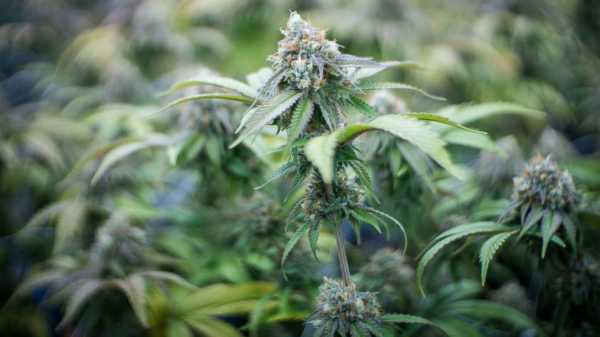 Democrats tend to favor legalization the most. Many of them define it as an issue of racial injustice, citing statistics that show minorities are arrested at greater rates than whites for marijuana-related offenses.

“Our archaic and nonsensical laws on cannabis are turning everyday Americans into criminals, sending them to jail, ruining their lives, tearing their families apart and wasting huge amounts of taxpayer dollars to arrest, prosecute and incarcerate people for marijuana use, a substance that has been proven time and time again to be less dangerous than alcohol,” Hawaii Rep. Tulsi Gabbard said at the National Cannabis Summit in Washington, D.C. on Friday.

It’s also an issue that’s popular with two large voting groups in their party – minorities and youth – and one that Democratic candidates have touted on the campaign trail this cycle.

But there are Republicans who support legalization. They, however, tend to talk about the financial aspect, noting how the product that can boost their state’s coffers.

Republican Rep. Tom Garrett of Virginia, who introduced legislation last year that would take marijuana off the federal controlled substances list, said he changed his mind after meeting people who were helped by medical marijuana and, therefore, thought his agricultural-heavy state should benefit from it.

“Why, why, why are we importing nearly a billion dollars’ worth a year of industrial hemp from Canada when we can grow it better and create economic opportunities right here in Virginia? There’s no good answer,” he said on a tele-town hall in February, according to a local news report.

An October Gallup poll found 64% of Americans supported legalization. Breaking that down, 72% of Democrats supported it while 51% of Republicans did.

“You have not only pronounced public support in terms of legalization,” he told ABC News, “you have demonstrated support with the initiatives passed and the emergence of state law.”

Here are the people most likely to use marijuana based on their professions, study says

More than half of American adults have tried marijuana, poll finds

And marijuana has become legal in large states that are represented by powerful members of Congress such as California, Colorado, and Florida.

“We’re getting some significant stakeholders in the United States Congress now,” Gettman said.

And they’re likely hearing from the voters back home.

“They’re probably getting a lot more contact from constituents asking why they aren’t protecting their states’ programs,” said Morgan Fox, the communications director for Marijuana Policy Project, a pro-legalization group.

There are 29 states, the District of Columbia, Guam and Puerto Rico that allow for medical use, according to the National Conference of State Legislatures, while 9 states and D.C. allow for some type of recreational use. And Idaho and Nebraska, which have no legalization, may have initiatives on their ballots in 2018.

Federal law is a key issue because, while many states have legalized its use in some form, on the federal level it remains illegal, setting up a conflict between state and federal law. For example, Washington D.C. legalized the use of marijuana but the U.S. Capitol Police has said using it in the Capitol building, which is federal property, is a crime. 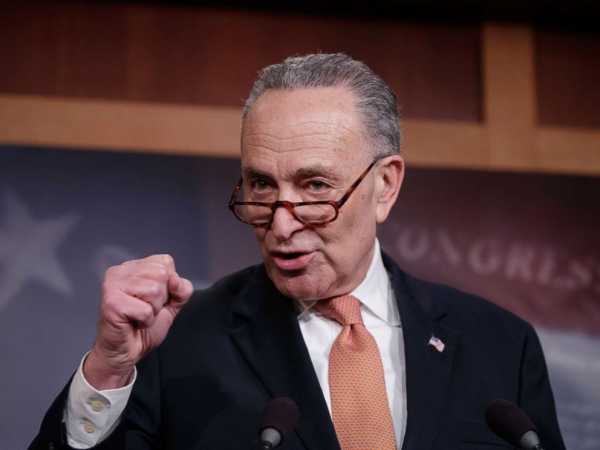 J.Scott Applewhite/AP PhotoSenate Minority Leader Chuck Schumer, explains to reporters how his negotiations with President Donald Trump broke down during this press conference on Jan. 20, 2018.

On the unofficial marijuana holiday 420, as the date of April 20 is known, Senate Democratic Leader Chuck Schumer announced his support for the decriminalization of marijuana at the federal level. He plans to introduce legislation includes provisions to respect state rights and protect children.

“The time has come to decriminalize marijuana,” Schumer said in a statement. “My thinking – as well as the general population’s views – on the issue has evolved, and so I believe there’s no better time than the present to get this done.”

Even his Republican counterpart, Senate Majority Leader Mitch McConnell, supports legalizing hemp, which can be grown in his home state of Kentucky. 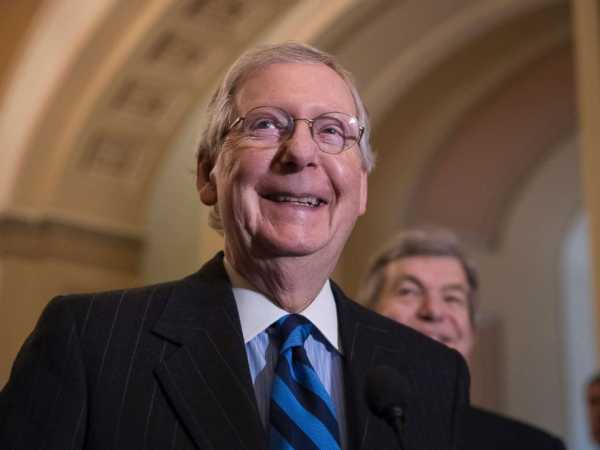 J. Scott Applewhite/APSenate Majority Leader Mitch McConnell, R-Ky., smiles as he meets with reporters as work continues on a plan to keep the government as a funding deadline approaches, in Washington, Feb. 6, 2018.

McConnell’s bill, known as the Hemp Farming Act of 2018, would remove hemp from the federal list of controlled substances and allow it to be sold as an agricultural commodity.

“By legalizing hemp and empowering states to conduct their own oversight plans, we can give the hemp industry the tools necessary to create jobs and new opportunities for farmers and manufacturers around the county,” McConnell said in a statement last week.

The benefits of both sides’ argument – increased voter turnout and more revenue – can be seen in Colorado, the first state to legalize marijuana.

It saw a dramatic change in voting patterns between 2008 and 2012, the year the legalization initiative was on the ballot, according to a study from the Brookings Institute.

The state saw a boost in revenue too. The cannabis retail market generated $1.51 billion in sales last year and sales have totaled $4.5 billion since it was legalized in 2014, according to the Colorado Department of Revenue.

The drumbeat on full legalization has been heard across the country, ranging from the small states like Hawaii all the way to New York.

And several Democrats running for office this year have made the issue part of their platform.

At the National Cannabis Summit, Ben Jealous, the former president and CEO of the NAACP and a candidate for Maryland governor, noted legalization was a major part of his criminal justice strategy.

New York gubernatorial candidate Cynthia Nixon has called for its legalization, which she called a matter of “racial justice” when she spoke to a conference of progressives in Washington D.C. last week.

“We have to stop putting people of color in jail for something white people do with impunity,” she said.

Marijuana use is roughly equal among Blacks and whites, yet Blacks are 3.73 times as likely to be arrested for marijuana possession, the ACLU reported in a 2013 study.

Even in states like Florida, where medical use is legal, Democratic gubernatorial candidate Tallahassee Mayor Andrew Gillum pressed for its recreational use, citing the civil rights argument.

In a recent gubernatorial debate, he argued marijuana uses involves “over-criminalization of young people of communities of color.”

In Illinois’ gubernatorial race, Democratic candidate J.B. Pritzker said he would sign legislation to legalize marijuana if he wins.

And Texas Senate candidate Beto O’Rourke, a longtime supporter of the issue, tweeted about it on 420 day.

Republicans have been joining the conversation.

Some state GOP lawmakers in Michigan, which allows medical usage, are considering allowing personal possession through legislative action instead of a statewide initiative.

The reasoning, reports the Detroit News, are fears the measure would boost Democratic turnout in November.

And former Republican Speaker of the House John Boehner surprised political observers last week when he joined the advisory board of Acreage Holdings, one of the nation’s largest cannabis corporations, saying “my thinking on cannabis has evolved” and that he now supports changing federal marijuana policy.

There are those who oppose legalization.

“We need to slow this train down, we need to people before profit,” he said a press conference at the National Press Club on Friday. “And we need to get the science out about the truth about marijuana which every day is hurting more people as this country slides deeper into the legalization, really the commercialization of marijuana.”

“We don’t want to lock people up for using marijuana,” he added. “But to against criminalization isn’t to be for legalization.”

The administration will have ultimate authority on the federal legalization of marijuana as President Donald Trump would have to sign any congressional bill into law or set a federal policy initiative.

These same groups were worried when, in January, Attorney General Jeff Sessions rescinded a trio of memos from the Obama administration that had a policy of non-interference with states when it came to marijuana use.

Republican Rep. Dana Rohrabacher of California, who is the lead sponsor of the Respect State Marijuana Laws Act, criticized Sessions when the decision was originally made. Rohrabacher has touted his support of marijuana in his competitive re-election campaign in a district that includes a lot of the state’s coastline.

“The attorney general of the United States has just delivered an extravagant holiday gift to the drug cartels,” he said in a statement. “By attacking the will of the American people, who overwhelmingly favor marijuana legalization, Jeff Sessions has shown a preference for allowing all commerce in marijuana to take place in the black market, which will inevitably bring the spike in violence he mistakenly attributes to marijuana itself.”

How Americans Acquired a Taste for Haggis, with Help from the...