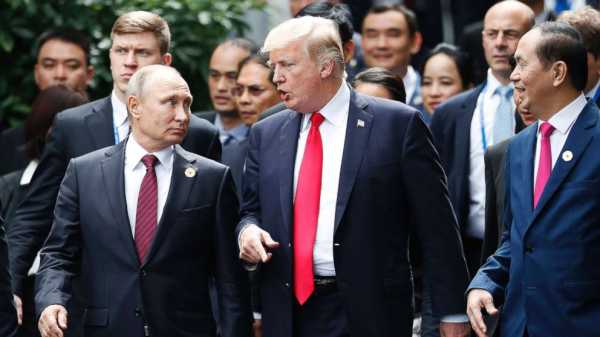 With additional sanctions looming, 68 percent support tougher U.S. measures against Russia, four in 10 strongly so. That view spans partisan groups, a rarity in today’s political climate, including 74 percent of Democrats, and 68 percent of Republicans and independents alike.

Even with support for sanctions, 52 percent favor U.S. President Donald Trump holding a summit with Russian President Vladimir Putin at the White House to try to improve U.S.-Russia relations; 42 percent oppose it on the grounds that doing do so would legitimize alleged international lawbreaking.

The public sees no contradiction in these views; among those who support a summit, 65 percent favor tougher sanctions as well. 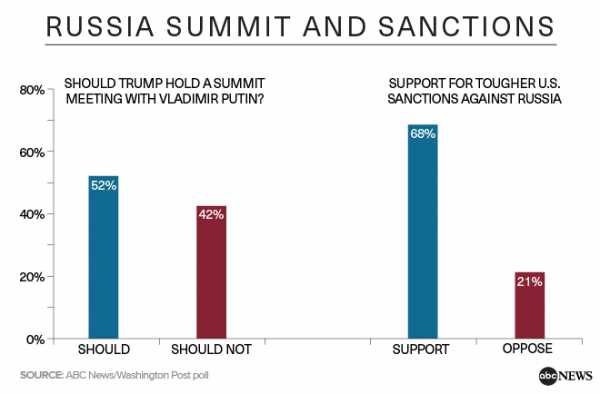 A majority, 56 percent, also supports the planned summit between Trump and North Korean leader Kim Jong Un, again rejecting the idea that this would legitimize outlaw behavior — and despite substantial skepticism about its outcome. Two-thirds say the meeting is unlikely to lead to North Korea giving up its nuclear weapons. (Unsurprisingly, those who think the summit will lead to denuclearization support the meeting by 81-14 percent, while skeptics divide evenly.)

The results on both countries underscore a longstanding public preference for talking rather than fighting between nations. Indeed, six in 10 oppose Trump threatening military action against Pyongyang. It’s also notable that most support a summit with Kim even though, in an ABC/Post poll last fall, just 32 percent trusted Trump to act responsibly in dealing with North Korea. In January, 52 percent expressed concern Trump would launch an unjustified nuclear attack; surely talks are preferable. 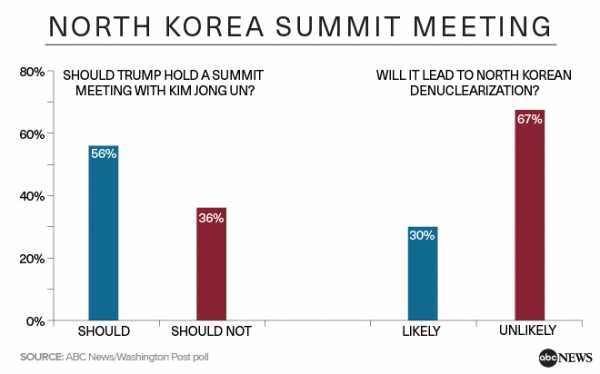 In another result on Russia, 49 percent say Trump has done too little to criticize Moscow, exceeding the 38 percent who say he’s handled it about right. (Just 4 percent say he’s criticized it too much.) The survey was conducted Sunday through Wednesday, before the U.S.-led airstrikes on Syria. In announcing them, Trump challenged Russia for supporting the Assad regime.

The poll, produced for ABC News by Langer Research Associates, finds sharply partisan results on a White House summit with Putin, an idea floated by Trump in a call with the Russian leader. Sixty-nine percent of Republicans support such a meeting, vs. 53 percent of independents and just 37 percent of Democrats. Support also is far higher among conservatives (66 percent) than moderates and liberals, 51 and 37 percent, respectively. That’s a contrast to the bipartisan backing for more sanctions.

There are partisan and ideological gaps on a meeting with Kim, as well; it’s supported by 70 percent of Republicans and conservatives, 56 and 57 percent of independents and moderates, and 46 and 40 percent of Democrats and liberals.

Support for both mooted meetings is significantly higher among more pro-Trump groups, including more men than women, more whites than nonwhites and more rural dwellers than people in cities or suburbs. Support for a summit with Kim is higher among seniors than young adults.

This ABC News/Washington Post poll was conducted by landline and cellular telephone April 8 to April 11, 2018, in English and Spanish, among a random national sample of 1,002 adults. Results have a margin of sampling error of 3.5 points, including the design effect. Partisan divisions are 32-25-35 percent, Democrats-Republicans-independents.

The survey was produced for ABC News by Langer Research Associates of New York, New York, with sampling, data collection and tabulation by Abt Associates of Rockville, Maryland. See details on the survey’s methodology here.