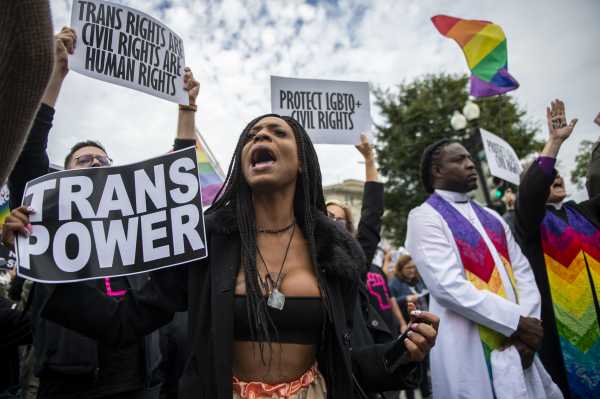 A group of Republican lawmakers appears ready to try to bridge one of the most acrimonious divides in modern American politics: the gap between LGBTQ activists and religious conservatives.

On Friday, Rep. Chris Stewart (R-UT) will introduce the Fairness For All Act, a purported compromise bill that would ban discrimination against LGBTQ people in employment, housing, education, and public accommodations — but carves out broad exemptions for churches and religious organizations.

It attempts to balance the rights of LGBTQ people while maintaining a measure of religious freedom, and serves as a response to the Equality Act, a more comprehensive bill protecting LGBTQ communities from discrimination. Earlier this year, House Democrats introduced and passed the Equality Act on a bipartisan basis, to much celebration, without a response in the Senate. Stewart’s bill will be the first time that an LGBTQ civil rights bill is introduced by conservative lawmakers, in either chamber of Congress.

“Religious freedom and LGBT rights don’t have to be in a lose-lose battle for protections in America,” Stewart said in a statement to Vox. “One of the great things about this country is that we keep improving and moving toward better outcomes. All of God’s children, regardless of sexual orientation or religion, deserve dignity, respect, and the right to pursue happiness. This legislation allows us to settle the legal questions and get back to the business of loving our neighbors.”

While there are already federal laws protecting against discrimination on the basis of race, religion, sex, and disability, queer people in the US remain without non-discrimination protections at the federal level, and in many states.

As Vox’s German Lopez noted, that means “someone can be fired from a job, evicted from a home, or kicked out of a business just because an employer, landlord, or business owner doesn’t approve of the person’s sexual orientation or gender identity.”

Addressing that gap, however, has been part of one of the most hotly contested issues in American politics in the past 30 years. Beyond the long trail of failed legislative efforts aimed at protecting LGBTQ people from discrimination, there’s a deep tradition of bitter court battles over the boundaries of religious freedom and the dignity of LGBTQ lives.

Stewart’s bill, which would expand the Civil Rights Act of 1964 to include sexual orientation and gender identity as protected classes, is modeled after the so-called “Utah Compromise,” the non-discrimination law enacted in Utah in 2015 after extensive negotiations between LGBTQ advocates and the Mormon Church. Some LGBTQ advocates have labeled the compromise a “Trojan Horse” for LGBTQ rights because it offers limited or watered-down protections, and continues to position the rights of LGBTQ people as secondary to religious concerns.

“The so-called Fairness for All Act is an unacceptable, partisan vehicle that erodes existing civil rights protections based on race, sex and religion, while sanctioning discrimination against lesbian, gay, bisexual, transgender and queer (LGBTQ) people,” Human Rights Campaign president Alphonso David told Vox in a statement. “For LGBTQ people living at the intersection of multiple marginalized identities, this bill is a double whammy of dangerous rollbacks and discriminatory carve-outs.”

Meanwhile, conservative groups, like the Heritage Foundation, have already come out against the bill for being too accommodating of LGBTQ people, saying it does not “promote the common good.”

It’s a big deal that conservative legislators are introducing a bill to protect the LGBTQ community with the backing of some religious conservative groups. But in trying to do so, they’ve likely created something that will upset just about everybody else, from the more extreme religious right, to mainstream LGBTQ advocacy groups.

In March, House Democrats introduced the Equality Act, the first comprehensive LGBTQ civil rights bill to pass the House. While it has been stalled in the GOP-controlled Senate, it would provide sweeping non-discrimination protections for LGBTQ people in the US in housing, employment, public accommodations, education, and health care for the first time under federal law.

At the time, there were reports that some conservative groups were working on a compromise bill, and it appears the Fairness For All Act is that compromise.

A small coalition of religious conservative groups — led by the American Unity Fund and including the Church of Jesus Christ of Latter-day Saints, Seventh-day Adventist Church, 1st Amendment Partnership, Center for Public Justice, and Council for Christian Colleges and Universities — have rallied behind the bill.

“I’m excited about the solutions that are embodied in the legislation, because I think that those are the exact ideas that we’re going to need to pass federal civil rights for LGBTQ people,” said Tyler Deaton, senior adviser at the American Unity Fund.

The Fairness For All Act would provide many of the same protections for LGBTQ Americans, but it also provides ample exceptions for churches and religious organizations to continue to discriminate against queer people.

According to a copy of the bill obtained by Vox, LGBTQ people would be protected from discrimination in housing and employment. But there would be exceptions for medical providers with religious objections to providing transition-related health care to trans people, and some gender-specific spaces like bathrooms could bar trans people from access. Meanwhile, churches and religious organizations would have the freedom to discriminate against LGBTQ parents in adoption and foster care services, as well as in educational institutions.

The bill, while providing broad exemptions for churches and religious organizations, would also modernize the definition of public accommodations for all protected classes. (The Equality Act also does this.) Current civil rights law considers places like restaurants, hotels, buses, and public accommodations; the update would add things Americans now use every day, like ride-sharing apps — giving Uber passengers who might have been discriminated against by a driver the same options for recourse that someone being turned away at a restaurant has. The bill is carefully worded but makes clear that private citizens and publicly owned corporations would not be exempt from the regulations in the bill.

According to Deaton, the bill would treat trans women as women and trans men as men under federal law, with exceptions for religious nonprofits and churches. One part of the bill that Deaton called “innovative” is a provision that would grant individuals the right to request increased privacy in single-gender spaces. “We are pushing people to accommodate reasonable requests for greater privacy,” he said, bringing up the case of Gavin Grimm, a trans student who sued his school for the right to use a bathroom for boys.

Originally, Grimm’s school district barred him from using the boys room and instead forced him to use a single-stall facility normally reserved for staff. Under Fairness For All, nonreligious schools would be required to let Grimm use the boys room. However, another student who would be uncomfortable using the boys room for any reason, could request to use the more private facility.

These thornier issues — around public accommodations and education access — were the more difficult ones to settle while Utah was working out its compromise. The FFA’s sponsors envision a similar path for their bill: Starting by getting fellow lawmakers to agree on the easier topics, like housing and employment protections, then negotiating over the specific protections they’ve proposed for cases like Grimm’s.

Critics of the bill say it’s just a rehash of typical conservative religious freedom demands. “The Fairness for All Act is anything but fair for all and reads like a wishlist for conservative religious groups,” said Alison Gill, vice president for legal and policy at American Atheists, in a statement to Vox. “It codifies religious exemptions and loopholes that allow religiously motivated discrimination against LGBTQ Americans in areas of employment, adoption and foster care, and education. It undermines existing protections prohibiting discrimination on the basis of race, ethnicity, or sex by broadening exemptions from the law.”

Rick Larsen, president of the Sutherland Institute, a conservative think tank based in Utah that supports the bill in its existing form, told Vox he worries that the all-or-nothing approach taken by both sides on this issue is only going to continue the cycle of divisive court rulings on LGBTQ issues and religious freedom, especially with employment protections for LGBTQ people currently before the Supreme Court.

“What we like about it is the stated intentional desire for fairness and a proposed process that will encourage collaboration because we’ve seen that work in our state,” he said.

Is compromise on LGBTQ issues possible?

A source with knowledge of the bill told Vox that legislation similar to the Fairness For All Act will be introduced in the Senate sometime in the future. While the broad religious exemptions may have more appeal in the chamber than the more progressive Equality Act, it remains to be seen whether the bill will find enough bipartisan support to pass it.

Anti-LGBTQ organizations that take a harder line are already working to shore up opposition to the proposed compromise bill. In a November letter to House GOP leadership obtained by Vox, the Family Research Council, the Heritage Foundation, Alliance Defending Freedom, Concerned Women for America, Christian Medical Association, and the conservative activist group American College of Pediatricians said the Fairness For All Act “fails to effectively protect religious freedom and the common good.”

“All Americans, not only those within a religious institution, should be able to live according to their beliefs,” reads the letter, which was addressed to Reps. Kevin McCarthy (R-CA) and Steve Scalise (R-LA). “Limiting freedom to a religious institution does not strengthen it, but drastically shrinks the ability for everyone to live their beliefs in the public square.”

Despite opposition from religious conservatives and the far right, Deaton remains optimistic that a makeshift coalition can form around the bill. “The paradigm we’re in is that politics is largely driven by the base,” he said. “If the Senate stays Republican for the next decade, which it could, then Fairness For All is the vehicle.”

To pass both chambers, however, it will require at least some progressive support, and that doesn’t appear to be happening either. Even though LGBTQ advocates are encouraged to see a bill offering any LGBTQ rights from conservatives, this isn’t one that progressives who championed the Equality Act can support.

“It’s really great to see some of these conservative religious groups acknowledging that LGBT discrimination and marginalization are real things and they need to be addressed,” said Mara Keisling, executive director of the National Center for Transgender Equality, in an interview with Vox. However, she went on to indicate that NCTE does not support the FFA Act, in comparison to the Equality Act.

“This bill does not protect LGBTQ people. Instead it codifies discrimination,” said Rep. David Cicilline, the chair of the House Equality Caucus. “The House already overwhelmingly passed the bipartisan Equality Act, which will ensure equal protection under the law for LGBTQ Americans. The Senate should bring the Equality Act up without further delay.”

The piece has been updated to clarify that there are currently provisions in the bill text that address public accommodations and education access.

Secret Service director is the latest casualty in DHS shake-up

Science Says: Arctic not so chill this record warm winter