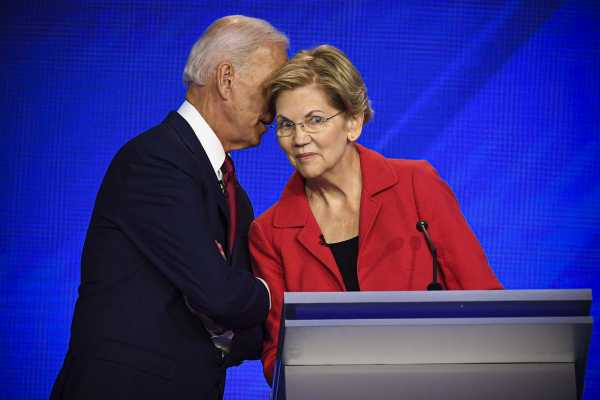 The most interesting part of Thursday’s third Democratic debate may have been what didn’t happen: Sen. Elizabeth Warren did not go for former Vice President Joe Biden’s jugular by bringing up their long-standing feud over bankruptcy. Warren chose not to go down that road — yet.

Back in 2005, Biden championed a bill that would make it more difficult for individuals to file for bankruptcy. Warren, then a Harvard law professor, passionately opposed the bill, saying it would benefit big corporations at the expense of American families. She even had a tense exchange with Biden while testifying against the bill at a Senate committee hearing.

It’s an issue that poses the potential for a stark contrast between two of the top contenders for the nomination, one that arguably gets to the heart of their differing approaches to politics. Warren wants the Democratic Party to be far more confrontational with corporations and the wealthy, whereas Biden is essentially offering a continuation of the status quo.

And Warren most certainly hasn’t forgotten about this. Back on the campaign trail this April, she brought it up again.

“I got in that fight because [families] just didn’t have anyone and Joe Biden was on the side of the credit card companies,” she said after a campaign rally in April. “It’s all a matter of public record.” (Matt Yglesias wrote about their “20-year argument” at more length earlier this year.)

So, considering that Thursday’s the debate was the first one in which Biden and Warren would actually share the stage, there was much speculation that Warren might more directly challenge Biden on the issue — accusing Biden of backing powerful financial institutions over American families. It could have been explosive.

But in the end, she did not take this tack. And her decision to hold off, for now, makes strategic sense.

Warren is in a good spot at this point. Her trajectory has been positive — she’s risen from a lower-tier candidate to about a tie for second place, with Sen. Bernie Sanders. A new poll by YouGov and FairVote that let likely Democratic voters rank the candidates by preference had an interesting finding: that a majority of respondents preferred Warren to Biden (though most voters currently list Biden as their first choice).

The upshot is that Warren is currently well-positioned to survive until the field is smaller — and has a good shot at picking up support from Sanders and Harris voters (who preferred her over Biden by two-to-one in this poll).

There are risks to going very negative so early. Warren likely doesn’t want to repeat the mistakes made by Sen. Kamala Harris. Harris’s confrontation with Biden over busing during the first debate back in June did give her a boost in the polls, but it didn’t last, and Harris has since lost all the gains she made.

Of course, there are risks to waiting too long to attack. But, importantly, it’s still early: The Iowa caucuses are nearly five months away. Traditionally, things often only get really nasty in the final couple of months before the voting starts.

So for now, Warren has kept this arrow in her quiver — perhaps to be used at a later point in the race.

What’s the deal with steel?

Discord in the House of May: Tory MPs Clash Over UK’s...