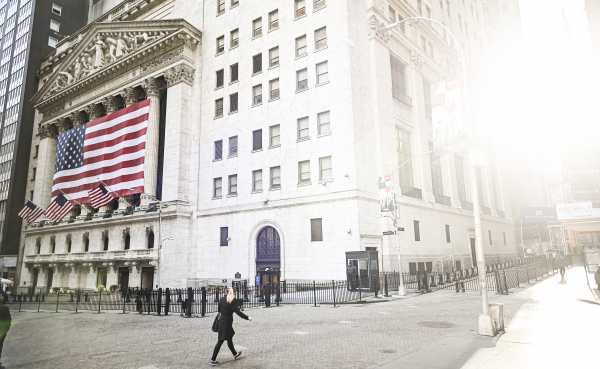 You don’t need to be told there’s something deeply wrong in the economy right now.

The coronavirus crisis has sent the economy into a tailspin in the United States and around the globe. The restaurant industry has ground to a halt. So have air travel, auto manufacturing, hotels, gyms, and cruise lines. The stock market has posted enormous losses and wild daily swings, to the point that trading has sometimes been paused altogether, and the price of oil has plummeted. Layoffs across the country are taking place in waves. We’re producing less, spending less, and consuming less.

After more than a decade of expansion, the next recession is here.

“The reality is that even without the data, this is the one time where we can look around and say, well, first of all, everybody is at home,” said Betsey Stevenson, an economist at the University of Michigan and former Obama administration official. “We won’t know for a long time what the full magnitudes of the decline are.”

Why we’re not overreacting to the coronavirus, in one chart

In recent days, I spoke to half a dozen economists about the state of the US economy and this question: Are we in a recession? The resounding response: Yes, we are, and if somehow we’re not yet, we will be in a matter of days.

“The economy was strong coming into this, and what we’re doing now is shutting down parts of the economy for the sake of public health,” said Bill Dupor, assistant vice president and economist at the St. Louis Fed.

What we’re in now is different from other recent downturns. It’s pegged to the global health crisis caused by the coronavirus pandemic, and whatever levers the Federal Reserve, Congress, the White House, and state and local governments pull can only do so much. Government officials made the decision that shutting down businesses and pausing a lot of economic activity is worth saving lives. As Dartmouth College economist Bruce Sacerdote put it, “It’s all about getting the damn virus under control.”

Say the bar down the corner from me is ordered to close, and the bartender, therefore, is laid off. I can’t go spend money at the bar right now, and the bartender isn’t making money she can spend. Even if I’m still collecting a paycheck, I know the economic situation is precarious, so I want to save.

“That’s the paradox of a lockdown economy,” said Greg Daco, an economist at Oxford Economics.

The warning signs are everywhere, even if the data isn’t yet

A recession generally means that the economy, instead of growing, contracts.

Traditionally, a recession has been defined as two consecutive quarters of negative GDP growth. The National Bureau of Economic Research has a broader definition: “a significant decline in economic activity spread across the economy, lasting more than a few months, normally visible in real GDP, real income, employment, industrial production, and wholesale-retail sales.” A group within the NBER, the Business Cycle Dating Committee, is the body that officially “calls” when a recession starts and ends. It could do so once two quarters of data are in, it could do so now, or it could never do so at all. Data is often a lagging indicator, but given the state of affairs, we don’t really need to wait to figure out what’s happening.

“The point is, we’re going to have a sharp economic contraction,” said Richard Sylla, professor emeritus of economics at New York University. “We won’t officially know whether it’s a recession or not until sometime late in the year. But that really isn’t the relevant thing.”

The data and estimates we do have are already staggering. Restaurant occupancy has plummeted across multiple states and cities, and airlines are slashing flights.

Weekly jobless claims spiked to 3.3 million the week ending March 21, the biggest jump in claims in history and well above the previous record of 695,000 dating back to 1982. Various states have seen unemployment insurance phone lines jammed as recently laid-off workers call in. The unemployment rate is widely expected to spike from the historically low rate of 3.5 percent in February. 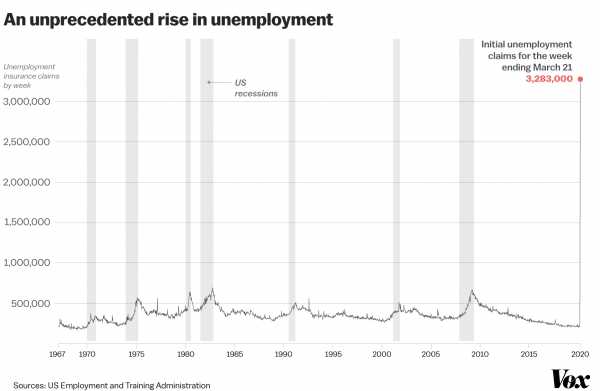 Analyst forecasts for GDP growth have become increasingly dire in recent days as the gravity of the situation sets in. JPMorgan estimated the economy could shrink by 14 percent in the second quarter. Goldman Sachs forecast a decline of 24 percent. Both predicted a strong bounce-back in the third and fourth quarters, largely on the assumption that the virus will be under control by then, which is far from assured.

“For me, there’s too much uncertainty,” Dupor told me.

This is hitting Main Street and Wall Street

Most recent downturns have started within the financial system, such as the Great Recession and financial crisis more than a decade ago, explained J.W. Mason, a fellow at the Roosevelt Institute, a progressive think tank. This is not that. “It’s starting in the real economy,” he said.

But that doesn’t mean what’s happening on Wall Street doesn’t matter. While the stock market is not the economy, plenty of people have money invested there, including for retirement. The stock market can also be a leading indicator of where the economy is headed, and by that measure, where it is headed is not good. Stocks have essentially given back all of their gains since Trump took office in 2017, and the markets have become pretty volatile.

“If you think about it, the stock market is a reflection of financial intermediation in the broadest sense of the term,” Daco said. “It’s essentially a scorecard whereby business generates revenue over time, they borrow, they lend, and they produce.”

The stock market’s performance could also have a psychological effect, whether it’s just in the headlines or people checking their investments and 401(k) balances. “I assume that a 30 percent decline in the stock market makes people feel poorer, so they’ll go out and spend less. That’s a source of declining demand,” Sylla said. 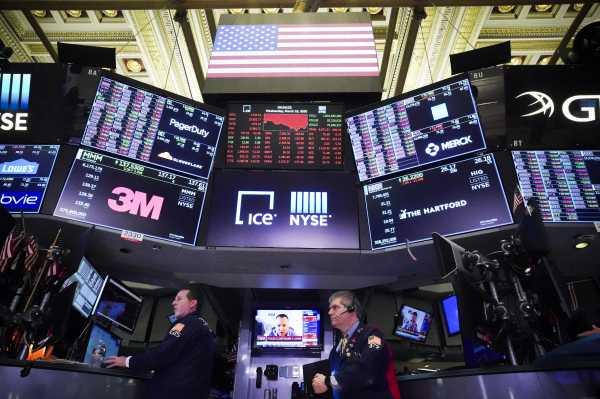 Oil prices have plunged as well, taking a sort of one-two punch: a price war between Saudi Arabia and Russia, and then a decline in demand because of air travel and other coronavirus-related developments. In a typical economy, that translates to low gas prices, which means consumers have more money to spend. But again, this is not that. A lot of people aren’t driving anywhere, and they’re trying to save their money, not spend it.

Beyond what’s happening in the stock market and oil prices, people across the country right now are feeling a real shock in their everyday lives. It’s not Wall Street traders who are on the front lines of the economic crisis here, it’s everyday workers.

What’s happening right now is a combination of supply and demand constraints. In some cases, there are legal constraints — cities and states are shutting down bars, restaurants, gyms, etc., and people are being told to stay home. In other places, the constraints aren’t legally in place, but they’re implied by society. “People literally aren’t going to work to produce stuff, and people aren’t going to buy stuff,” Goldwein said.

“Very large swaths of industries are going to be called off limits, so those businesses are naturally cutting back hours and letting people go,” Sacerdote said. He also emphasized that, as in 2008, this will hit people hardest on the lower end of the economic and educational spectrum. “The gap by education will be strong again, if not stronger,” he said.

Dupor warned that state and local governments could be headed toward severe hardships as well. The cost of borrowing for many of them has increased sharply, and for governments going forward with critical investments, that translates to higher interest costs on top of falling tax revenue. Eventually, they’ll have to start making decisions about cutting back spending. It’s “going to mean both worse public services going forward, including potentially critical stuff for dealing with public health emergencies like public hospitals and clinics, and a loss of income for the companies and workers that produce this stuff,” Dupor said.

We’re in the unknown

Anyone who tells you they know what’s going to happen with the US economy, or when it’s going to bounce back, is guessing. Some economists have suggested that the economy will begin to bounce back in the third quarter, but that assumes the virus is under control and people are able to return at least somewhat to their normal lives. And there’s just no guarantee that’s going to happen — scientists have warned that we could have to live with social distancing for a year or more.

“There will not be a recovery until we have solved the public health part of this,” Goldwein said.

But that does not mean all is lost (at least if we all intend to keep getting out of bed every day, if only to sit in our living rooms in our pajamas).

The government has a role to play to keep things humming along as much as they can until the health and science elements figure it out. The Fed has slashed interest rates, injected loans, and taken other measures to help shore up the financial system. On Capitol Hill, Congress has already passed legislation on vaccine development, free testing, paid sick leave, and expanded unemployment. A $2 trillion stimulus bill is in the works.

Such measures are meant to keep the economy from falling deeper than the health crisis necessitates and tide over businesses and citizens. Of course, the concern is whether they’ll be enough. As Politico’s Ben White notes, there are calls for a much bigger stimulus coming from the left and the right.

If the coronavirus crisis ends relatively soon, or if the government does enough to intervene, once this whole thing is over, the expectation is that the economy will bounce back.

“There will be a strong recovery, because everybody will breathe a sigh of relief when it’s over, but we don’t know when that’s going to happen,” Sylla said.

But if we’ve done too little, once the crisis is over, it will be much harder to get the economy back up and running. The fact that there are customers who can come back doesn’t mean a business immediately reappears, or that those customers have money in their pockets.

The 9 most important unanswered questions about Covid-19

“People are cooped up, they’re lonely, they’re not getting very much face-to-face socializing, and they are going to be excited to return to restaurants and movie theaters and bars and to go shopping at the mall and to go to Disneyland, but if they’ve depleted all their savings, if they’ve ruined their credit scores, if they’ve declared bankruptcy, then they won’t be able to afford those things,” Stevenson said. “And if the businesses have declared bankruptcy, they won’t be there for them to spend their money at.”

There is much that is unclear right now, including on the economy. We’re going to know when the US recession began — early March 2020 — but we have no idea when it will end. It may not officially be declared a recession for months or a year, if it even is at all. The best-case scenario: It is an extremely deep but short recession, maybe a quarter or two. (The last recession lasted 18 months.) The worst-case scenario? Well, we just don’t know.

“We’re in entirely new territory,” Dupor said. “We haven’t ever seen this before.”