Home Politics The Finnish president was all of us at Trump’s latest unhinged press... 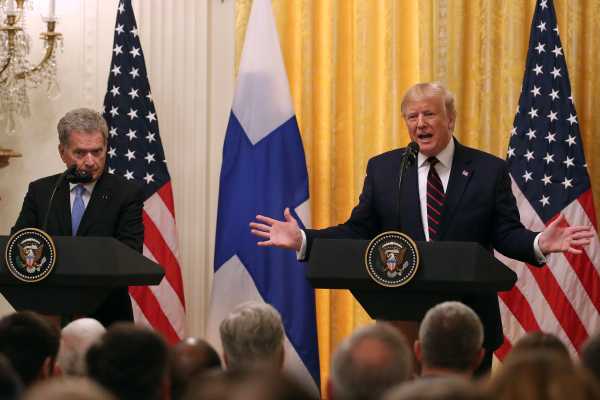 President Donald Trump’s joint news conference on Wednesday with Finnish President Sauli Niinistö began with Niinistö making a remark that was widely interpreted as throwing shade in Trump’s direction, and wrapped up with Niinistö chuckling as Trump berated a reporter who had the temerity to point out that Trump wasn’t answering his question.

Trump’s performance throughout the press conference — which came hours after a joint media availability with Niinistö in which Trump casually tossed out accusations of treason and smeared the “corrupt media” as “truly the enemy of the people” — was unhinged even by his standards. It suggested Trump isn’t coping very well with the specter of impeachment amid a rapidly widening abuse of power scandal centered around his efforts to enlist foreign countries as opposition researchers for his 2020 campaign.

“Mr. President, you have here a great democracy. Keep it going on.”

During his opening statement, Niinistö turned to Trump and told him, “Mr. President, you have here a great democracy. Keep it going on.”

That remark could have been just one of the banal platitudes world leaders often offer each other in public forums, but it was interpreted by many on the internet as sarcasm.

As if on cue, Trump wasted no time illustrating the threat he poses to American democracy. He went on a lengthy rant in response to the first very question in which he accused House Intelligence Committee Chair Adam Schiff (D-CA) of “a criminal act” and “treason”— all because Schiff paraphrased his call with the Ukrainian president in an unflattering manner during a hearing last week.

Trump went on to characterize the memo about that call released last week by the White House as “exact” and “word for word” — even though it says on its very first page that it is not in fact a transcript.

That sort of blatant lying would be major news coming from the mouth of any other president, but it’s par for the course with Trump. But what was abnormal even for him was how upset he became with Jeff Mason of Reuters when Mason tried to follow up and get him to answer a question he dodged. Mason had asked, “What do you, or what did you want President Zelensky to do with regard to Joe and Hunter Biden?”

“Are you talking to me?” Trump snapped back, as Mason pressed him for an answer. But none was forthcoming.

“We have the president of Finland. Ask him a question,” Trump admonished Mason. “Did you hear me?”

As Mason continued to try and press his point, Niinistö could be heard chuckling.

Mason eventually tried to move on by doing as Trump told him and asking Niinistö a question. But before Mason could even finish doing so, Trump hijacked the proceedings and started ranting about how “you never had wins with other presidents, did you? … Your wins are now.”

“But I think the question is for me,” Niinistö interjected, incredulously.

Moments later, Trump attacked CNN as “corrupt people,” then abruptly ended the news conference. More laughter could be heard moments after Trump walked out of the room. Indeed, the spectacle would’ve been funny if the guy behaving so erratically wasn’t president of the United States.

Niinistö, who also used his opening statement to nudge Trump to take the climate crisis seriously, wasn’t the only Finn who seemed to throw shade Trump’s way during the news conference. Alluding to Trump’s scandalous Ukraine call, the only Finnish journalist who got to ask a question asked Niinistö, “What kind of favors has Mr. Trump asked for you?” Trump, seemingly oblivious to the implication of her question, responded by rambling about praise he’s received from the likes of Rush Limbaugh and Sean Hannity.

Why Sen. Dianne Feinstein is being challenged from the left