Home Politics The media’s biggest bias is its centrism 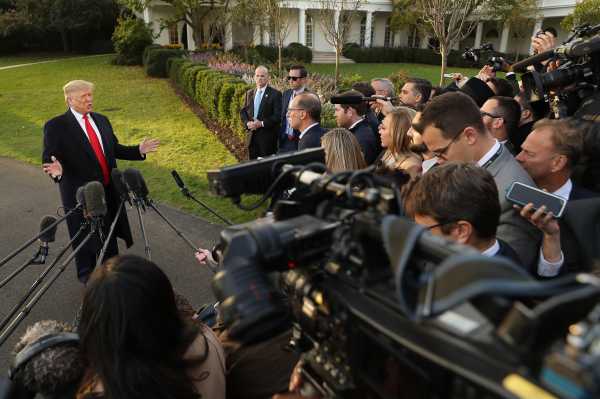 The fight over “media bias” is one of the most enduring features of American politics, and one that usually never goes anywhere interesting. Conservatives say the mainstream press is unfair to them, liberals think the real problem is the press is too accommodating to conservative complaints, and round and round we go.

On Thursday morning, Politico founder John Harris managed a genuinely interesting contribution to this conversation in a piece that takes aim not only at a relatively invisible source of bias in the Washington press but also a kind of introspection on Harris’s adherence to it. It’s a source of bias that’s not left- or right-leaning in partisan terms — it predisposes DC press and political figures to view both Trump and Warren-Sanders-style Democrats unfavorably — but fundamentally establishmentarian.

“A quarter-century covering national politics has convinced me that the more pervasive force shaping coverage of Washington and elections is what might be thought of as centrist bias, flowing from reporters and sources alike,” he writes. “This bias is marked by an instinctual suspicion of anything suggesting ideological zealotry, an admiration for difference-splitting, a conviction that politics should be a tidier and more rational process than it usually is.”

Harris is one of the deans of insider Washington journalism; if the establishment has a house organ, Politico is it. Indeed, Harris explicitly discusses the ways he himself suffers from a case of centrist blinders (“I’ve got it. A pretty strong bout, actually”). He argues this bias has led people he knows in the political world to be, maybe, too harsh on Warren’s chances against Trump and, perhaps, too sanguine about the likelihood of a more centrist candidate’s victory.

As he puts it, citing the 2000 and 2016 elections: “Candidates who were most attuned to the purported wisdom of the Washington operative class were thwarted in the fight for power on multiple occasions when the consequences were huge.”

Harris largely defines this “centrist” bias as stemming from an excess of institutionalism. People in Washington think Washington works; that if the system were left to its own devices, without any yucky populists or ideologues, then the Republican and Democratic leaders could come to some pretty clear deals. What’s more, these centrist institutionalists argue, it would be popular — the American public is yearning for someone who just sticks to business as usual and gets us away from the vicious polarization that’s defined the Trump era.

Harris doesn’t name too many names as his targets; he speaks in broad terms about prevailing views among a connected swath of the DC press, operatives, think-tankers, and politicians. Among that crowd, it’s worth noting that the problem is bigger than what Harris suggests: It’s not merely an excess of institutionalism but actually an expression of a substantive political ideology. This elite centrism, in practice, amounts to a kind of milquetoast nationalist libertarianism.

The centrist ideology is essentially the slogan “fiscally conservative but socially liberal” come to life. It holds that the national debt is one of the greatest threats to the United States in the long term and that Social Security is unsustainable. It thinks there’s an obvious compromise solution on immigration and adheres to a kind of modest social liberalism on abortion and same-sex marriage, though it generally disdains “identity politics.” It reveres the troops and generally supports US military involvement in foreign wars, seeing criticism of America’s interventionist consensus as vaguely unpatriotic.

The influence of this version of centrist ideology should not be underestimated. It’s particularly popular among the very wealthy, who lavishly fund organizations like No Labels and Fix the Debt to promote it. It often crops up among “straight” or “objective” news reporters, who see it as entirely uncontroversial to say the national debt is a pressing policy problem (it isn’t) or to hold up the American military as a paragon of national virtue. It partly explains why Democratic presidential debates get so hung up on debating how to pay for Medicare-for-all: The underlying assumption is that debt financing is obviously unacceptable.

The centrist ideology is not mere institutionalism, though that’s part of it. It’s a very specific vision of how the world works, one that forms the background of a lot of Washington conversations and political debates — invisible until you notice it and then all of a sudden pervasive.

This imbalance stems from the fact that “centrist” ideas are the province of the educated, wealthy elite. Perhaps the single best predictor of social liberalism in America, aside from Democratic Party membership, is education: The more educated you are, the more likely you are to be open to things like marriage equality and immigration. At the same time, America’s elites are wealthy and thus more likely to be leery of significant tax hikes that would hurt their bottom line. Because elites tend to socialize with other elites, they can talk themselves into thinking that their ideas seem like common sense.

Harris is capturing not just an institutionalist bias but an ideological one, a political worldview based on dubious substantive arguments but with pervasive influence in the capital — owing in no small part to the class makeup of our political elite.

Iain Henderson a doubt for Ulster’s European clash with Leinster

Report: Abortion is safe but barriers reduce quality of care