Marijuana legalization is about to have another big election.

In November’s midterm elections, voters in Michigan and North Dakota will vote on ballot initiatives that would legalize cannabis for recreational purposes in those states. And voters in Utah and Missouri will vote on medical marijuana.

The ballot initiatives could continue momentum for marijuana legalization — during what’s already been a huge year for legal pot. This year, California opened the world’s biggest legal marijuana market, Vermont legalized marijuana possession (becoming the first state to do so through its legislature), and Canada became the world’s first wealthy nation to fully legalize pot.

Marijuana is legal for recreational and medical use in nine states. It’s legal only for medical purposes in 21 more states.

Voters in November will have a chance to expand that map. Here’s what the major statewide ballot initiatives would do.

Michigan Proposal 1 is, by and large, a standard marijuana legalization initiative. Its big aims:

Medical marijuana is already legal in Michigan, so the initiative would have limited impact in that area.

So far, the proposal is polling well. According to Ballotpedia’s tracker, every public poll has found that a plurality or majority of voters support the initiative.

North Dakota Measure 3 takes a different approach to legalization than the initiatives that have been so successful so far. Its major changes:

That’s it. There’s no language about regulation or taxes.

Cole Haymond, an adviser for the campaign, told Christopher Ingraham at the Washington Post that this is by design: “We leave our bill wide open so the legislature can do their job — regulations, taxes, zoning, whatever.”

This is not how previous successful ballot initiatives worked. They left a lot of room for state lawmakers and regulators to flesh out a system under which marijuana can be bought and sold, but the initiatives generally set up a framework that these policymakers had to follow. North Dakota, at least, is taking a different approach — and it will be interesting to see what, if anything, state officials come up with.

Medical marijuana is already legal in North Dakota, so the ballot measure would have no significant impact in that area.

Public polling on the measure is limited and mixed. According to Ballotpedia’s tracker, one poll in February found plurality support, but another in August found majority opposition. It would be surprising if deep-red North Dakota legalized marijuana before more liberal states like New York and New Jersey, but the limited polling suggests it’s not impossible.

There’s a twist: In the lead-up to the election, Utah advocates, policymakers, and other stakeholders agreed to compromise legislation that will change how medical cannabis is actually implemented. The compromise agreement will need approval from the legislature and governor, but lawmakers appear poised to pass it, especially if voters okay Proposition 2.

Ben Lockhart at Deseret News has a great breakdown of the compromise. But here are the big changes:

Utah Gov. Gary Herbert (R) said he will hold a special session to pass the compromise agreement, regardless of whether voters approve Proposition 2. The compromise has powerful Utah advocates behind it, including the Mormon church. Whether it actually passes the legislature, though, remains to be seen.

Proposition 2, meanwhile, has strong support in Utah. According to Ballotpedia’s tracker, polls have consistently found that more than 60 percent of surveyed Utahns support the initiative. This helps explain why the legislature might act: If they don’t, medical marijuana seems likely to be legalized anyway — under terms more conservative lawmakers don’t want.

Missouri will have three different ballot initiatives dedicated to legalizing medical marijuana. All of the initiatives would legalize possessing, using, buying, and selling pot for medicinal purposes, and allow the state to license and regulate dispensaries through a new system.

But there are some differences on taxes:

There are also some differences with qualifying conditions. If a patient doesn’t have a qualifying condition under the law, Amendment 2 and Proposition C still let the patient get permission to use medical marijuana with a doctor’s approval. Amendment 3, meanwhile, is more limiting — only letting patients petition a board to get a condition added to the state’s list.

And Amendment 2 allows home growing, while the other two measures do not.

For more information, Ballotpedia has a thorough breakdown of the initiatives’ differences.

So what happens if they all pass? As Will Schmitt at the Springfield News-Leader wrote, Missouri law does actually provide some clarity here. First, the constitutional amendments would take priority, leaving Proposition C in the dark if all three initiatives pass. Second, the initiative with more votes would take precedence, so it may come down to which initiative can get more support.

A poll from August found that medical marijuana has majority support in Missouri. But it’s only one poll, and it’s unclear how majority support will ultimately translate to a ballot with three different initiatives.

Marijuana is already legal for recreational use in nine states

Based on the Marijuana Policy Project’s count, 30 states have already legalized medical marijuana, and nine have legalized cannabis for recreational uses (to varying degrees).

Generally, not many people deny that at least some of the components of marijuana can help with some medical conditions. The debate around medical marijuana is mostly about the details of how states implement medical marijuana — particularly about whether a state system is too lax (creating de facto legalization), and whether it would be better to take the specific components of marijuana through the federal approval process for other medicines instead of legalizing the whole plant for medicinal use through a voter initiative.

Supporters of legalization argue that it eliminates the harms of marijuana prohibition: the hundreds of thousands of arrests around the US, the racial disparities behind those arrests, and the billions of dollars that flow from the black market for illicit marijuana to drug cartels that then use the money for violent operations around the world. All of this, legalization advocates say, will outweigh any of the potential downsides — such as increased cannabis use — that might come with legalization.

Opponents, meanwhile, claim that legalization will enable a huge marijuana industry that will market the drug irresponsibly. They point to America’s experiences with the alcohol and tobacco industries, which have built their financial empires in large part on some of the heaviest consumers of their products. This could result in far more people using pot, even if it leads to negative health consequences.

It’s worth noting, though, that legalization doesn’t have to be so binary. Although most states that have legalized have adopted a model that lets for-profit companies produce, sell, and market the drug (similar to alcohol), policy experts argue that there are more options.

The government could legalize possession and gifting but not sales, as Washington, DC, has done. It could put state agencies in charge of selling pot, as some provinces in Canada are doing (which research has linked to better public health outcomes for alcohol). A RAND report, in fact, noted that there are at least a dozen alternatives to standard prohibition. 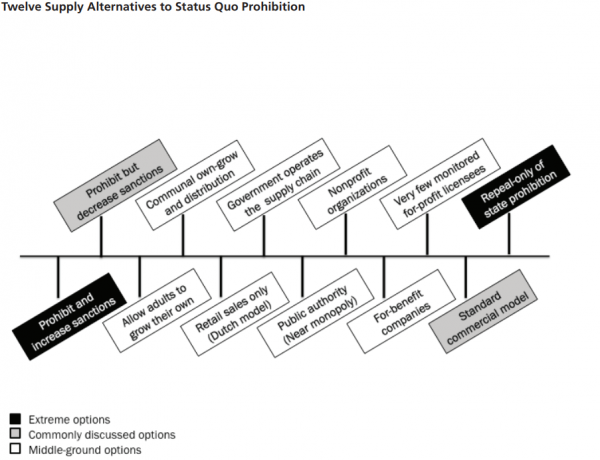 Again, though, only prohibition and the standard commercial model have gotten a lot of discussion in policy debates. That’s essentially what’s on the ballot in Michigan.

But that may be changing. As more state legislatures get involved in marijuana legalization (including potentially North Dakota, since the ballot initiative is so vague that it may force lawmakers to act), they could consider a broader array of options — ones that are more tuned to public health and safety concerns. But that will require more legislative work than what’s currently on the ballot for 2018.

England’s Coronavirus Death Toll Rises by More Than 600 in 24...

US ‘Interception’ of Russian Patrol Near Manbij Proves Efficiency of Cooperation...