Home Politics The most powerful moment of the Whitaker hearing had nothing to do... 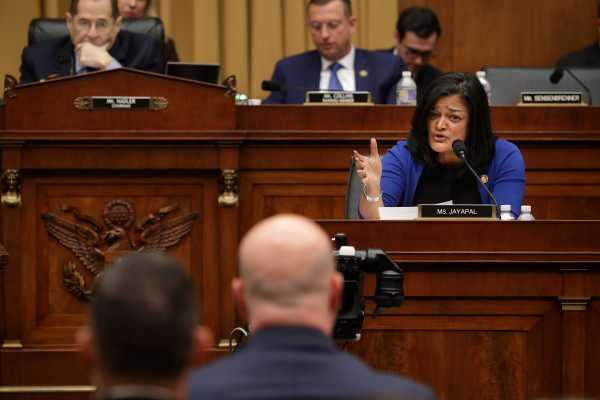 The most powerful moment during Matthew Whitaker’s testimony before Congress had nothing to do with the point of the hearing, which was supposed to be about whether he’s interfering in special counsel Robert Mueller’s investigation.

Instead, the moment came when Rep. Pramila Jayapal (D-WA) asked Whitaker about his involvement in a Justice Department policy that resulted in thousands of migrant children being separated from their families. (Whitaker served as then-Attorney General Jeff Sessions’s chief of staff when the policy was implemented by the department in April 2018.)

While it’s true that there is no DOJ document called “family separation policy,” there was a formal “zero tolerance” policy, which resulted in parents being prosecuted for illegal entry and their kids being taken away.

Jayapal asked Whitaker: “Were you aware of this memo at the time?”

“So as the chief of staff, you were not aware of what your boss was doing?” she asked.

Whitaker didn’t have a response.

Despite what Whitaker would have you believe, the Trump administration knew what it was doing

Whitaker’s claim that “there was no separation policy” echoes what DHS Secretary Kirstjen Nielsen said last June on Twitter and during congressional testimony.

But as Jayapal mentioned, last month Merkley released a leaked DHS and DOJ memo from December 2017 that indicates the department was explicitly considering separating families arriving at the border months before the zero-tolerance policy was implemented.

That memo lists “prosecution of family units” and “separate family units” as among the options the government could use to deter illegal immigration. Upon releasing the memo, Merkley sent a letter to the FBI asking the bureau to open a perjury investigation into Nielsen, who claimed during testimony to the House Judiciary Committee that “we’ve never had a policy of family separation.”

When he wasn’t dodging questions about Mueller, Whitaker repeatedly struggled to justify President Donald Trump’s position that the lack of a border wall along the southern border is a major source of crime in the US.

Under questioning from Rep. Sylvia Garcia (D-TX), Whitaker was unable to cite any data indicating that increased immigration results in increased crime — an assertion at odds with reality.

Escobar would know — she represents the city.

Why coders want to optimize the world