Home Politics The Note: A surprising road to familiar results 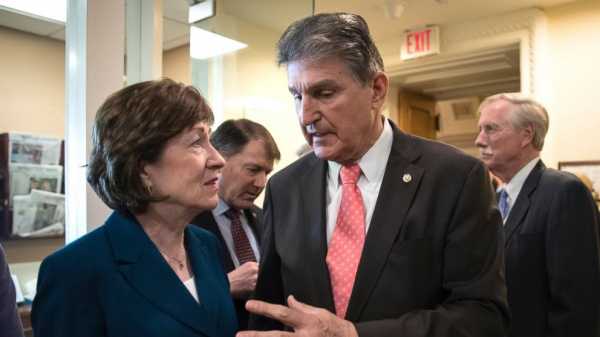 President Donald Trump wants to go very broad on immigration, only signing off on a plan for Dreamers if the border wall is funded and legal immigration is curtailed. But he wants to stay very narrow on guns, with a tight focus on mental health.

Inaction appears to be the most likely result of both legislative pushes. The takeaway should be equally clear: Trump was elected on a promise of big change, but is deepening the grooves of politics as usual.

When you filter out the unusual – and there’s loads of that, always, with this president – political stands continue to be dictated by ideological seating arrangements. Look no further than the GOP malleability on deficits and the debts, or the stalemates developing on immigration and guns.

Much of the country seems to be expecting that outside events will force action.

The evidence so far suggests that only voting will drive different results. To quote Jeb Bush from yesterday, speaking about the Dreamers in particular, “If you don’t like what they’re doing, then throw the bums out.”

The RUNDOWN with MaryAlice Parks

According to a Quinnipiac poll last December, American voters overwhelmingly support background checks for all gun buyers, 95 percent to 4 percent, including 94 percent to 5 percent among voters in households where there is a gun.

By a comfortable margin, 59 percent to 36 percent, Americans favor stricter gun laws in the U.S., too, and by and large, voters agree Congress is not doing enough to reduce gun violence.

Polling on concrete policy prescriptions shows a desire for change as well. A Quinnipiac poll from last October showed a big majority of voters supported a mandatory waiting period for all gun purchases, 79 percent to 19 percent.

On the issue of Dreamers, it is the same. An ABC News/Washington Post poll last September found 86 percent of Americans — across the political spectrum — support giving undocumented immigrants, brought to this country as children, the right to maintain residency in the U.S.

And yet, on both these issues, an apparent stalemate on Capitol Hill. The question now is: Why?

Why is there such a gap between the will of the people and the actions of the politicians?

The TIP with Lissette Rodriguez

Less than 24 hours after the Parkland high school shooting, Florida Agriculture Commissioner Adam Putnam, a Republican running for governor, called on lawmakers to postpone hearing a bill his department had put together that would ease concealed weapons permitting.

In Florida, the Department of Agriculture grants permits for concealed carry. The bill focused mostly on oyster harvesting and other agricultural items, but on page 87 of the 98-page bill was a provision that would allow the department to automatically approve concealed carry permit applications if not approved within 90 days. The provision would allow the department to retroactively revoke the approval if “disqualifying information” is discovered.

In a statement, Putnam argued someone like the accused Parkland high school shooter would not have been eligible for a concealed carry permit given his “mental health issues,” and instead argued “the focus now should be on mental health and how we protect our children.”

“In the wake of one of the worst mass shootings in our state’s history, policymakers should be focused on policies that will make our communities safer,” Valimont said in a statement to ABC News. “Instead, they’re trying to weaken our permit system and enable people with dangerous histories to carry hidden, loaded guns around our children. Florida deserves better.”

Tallahassee Mayor Andrew Gillum, a Democratic challenger to Putnam, said Republicans should see this as much more than just an inopportune time to pursue easing gun laws.

Gillum told ABC News Thursday that “these kinds of bad bills, bad pieces of legislation continue to roll through.” Republicans, he said, are “unprepared and unwilling to stand up on behalf of everyday people.”

Another candidate for governor, Republican Rep. Ron DeSantis, told NTN24, a Spanish-language news channel, that when it comes to gun control: “We’ll have time to debate this stuff.”

As of Thursday evening, Putnam’s office had yet to respond to an ABC News inquiry about whether the concealed carry permitting provision would remain in the bill.

WHAT YOU NEED TO KNOW TODAY

• Secretary of State Rex Tillerson returns to Washington from Turkey.

• Vice President Mike Pence delivers remarks to the Republican National Committee in San Antonio, Texas, and participates in a roundtable discussion on immigration with the United States Customs and Border Patrol.

QUOTE OF THE DAY

“I am actually humbled by the fact that people think that I could be a leader of the free world, but it’s just not in my spirit, it’s not in my DNA.” – Oprah Winfrey, on “60 Minutes Overtime,” when asked about a potential 2020 run for president.

• Immigration bills fail in the Senate, fate of Dreamers murkier than ever. The Senate on Thursday failed to advance four proposals that addressed immigration reform, one of which was backed by the White House. The hopes that Congress comes to an agreement on immigration this week are now completely out of reach. (Mariam Khan) http://abcn.ws/2EL08Qc

• Survivors of Florida high school shooting call for action on gun control. A senior at the school, David Hogg, said people should not get normalize mass shooting incidents like this because it will only happen again. “This is a time for our country to take a look in the mirror and realize there is a serious issue here,” he said. (Stephanie Ebbs) http://abcn.ws/2F7F5W8

• Trump ended rule to block mentally ill from getting guns. President Donald Trump has often pointed to mental illness as the underlying cause for mass shootings, but one of his earliest actions as president was to undo a regulation that would have made it more difficult for people with a known mental illness to buy guns. (Alisa Wiersema) http://abcn.ws/2EskSJh

• VA secretary criticized on Capitol Hill for travel decisions. Members of the House Committee on Veterans Affairs criticized the agency’s Secretary David Shulkin during a budget hearing Thursday, a day after a blistering report released by the VA Office of the Inspector General alleged Shulkin improperly accepted a gift of Wimbledon tickets during a work trip to Europe last summer during which he spent the majority of the trip sightseeing. (Sarah Kolinovsky and Elizabeth McLaughlin) http://abcn.ws/2Cn43O4

Hawking Sheds Light on What Happened Before the Universe Was Born...

Leicester chairman thanks fans for tributes on first anniversary of father’s...