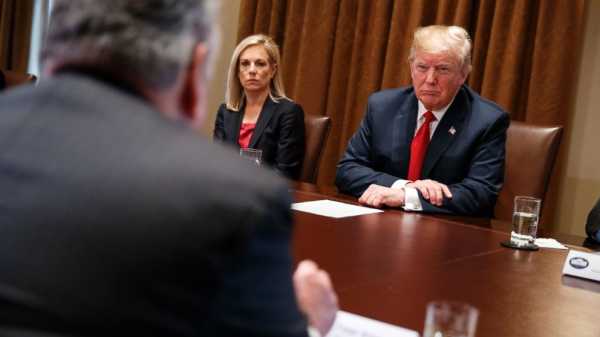 He also set a series of patriotism traps for his political enemies. Taken together, they frame the midterm elections in a way the president likes: around him, and around those who stand for his vision of what the country should be.

That’s the context for his labeling of Democrats as “un-American” and (jokingly, we learned belatedly) “treasonous” for not applauding his State of the Union address. This is the same man who sought a political wedge in taking on NFL players who took a knee, and in declaring that flag-burning should be illegal.

Now comes the planned military parade – a spectacle that would elevate the armed services, yes, but also elevate Trump.

The expected harsh critique from his opponents sure looks to be at least part of the point. Trump is trying to make his political enemies more than that – into enemies — not just of the president — but of the presidency, and of the nation itself.

The RUNDOWN with MaryAlice Parks

It’s been a question since Hillary Clinton lost and President Obama left office: Who becomes the face of the Democratic Party?

In elections in 2017, in ads so far in 2018, and in the president’s own remarks this week, it is clear the GOP wants to run against Nancy Pelosi. Fair or not, there are real questions about whether Pelosi may end up being an anchor weighing down newcomer candidates wanting to present fresh faces to voters.

Perhaps coincidentally, this conversation again percolated in Washington right as the House Democratic Leader decided to remind the country just how strong she can be, even at 77 years old.

Lest anyone think she might be intimidated into stepping down, Pelosi stood for over eight hours, threatening to oppose any spending bill until House Speaker Paul Ryan promises to hold a debate on the future of the Dreamers.

A few hallways away, in another part of the Capitol, former Vice President Joe Biden told his Democratic colleagues those Dreamers should never be bargaining chips. He wasn’t disagreeing with Pelosi, but he wasn’t really backing her either.

The two of them talking at the same time was fascinating. Biden arguably always wanted to be the face of the party, and now, with his ability to talk to the middle of the country and build bridges across party lines, he may be one of the biggest threats to Republicans. Will he end up being the one Democrats pick to be seen with?

The TIP with Serena Marshall

The president’s chief of staff, John Kelly, called the president’s support for expanding Deferred Acton on Childhood Arrivals protections to roughly 1.8 million undocumented immigrants “stunning” — before suggesting some would-be recipients were “too lazy” to sign up or renew.

But another possible reason: cost. It costs DACA applicants $495 to apply and be screened, a fee they must repay every two years.

And yet another possible reason: eligibility. It turns out many of those “eligible” for DACA aren’t actually eligible.

According to the Migration Policy Institute (MPI), the best estimate for how many individuals might qualify for DACA is roughly 1.85 million. But all of those individuals don’t necessarily meet the minimum criteria.

To qualify for DACA, according to the United States Citizenship and Immigration Services (USCIS), in addition to meeting certain entry and residing dates, you must be at least 15 years old, be currently in school, have graduated or have obtained an equivalence certificate, or be a current or former member of the military. Of the 1.85 million, MPI estimates 1.326 million have met all of the criteria and are eligible to apply.

That leaves roughly 500,000 outside the bounds. Of those, MPI estimates about 400,000 meet most of the criteria — except the educational standards — and 120,000 of those are under the age of 15 and therefore too young to apply.

According to the latest data, since the start of the program, USCIS estimates more than 950,000 unauthorized immigrants brought to the United States as children have applied for DACA. Nearly 800,000 have been granted protection from deportation under DACA. At the time President Trump announced he would end the program, there were 689,821 DACA enrollees, a number that excludes those who were terminated, failed to renew, and those who updated their immigration status.

That means DACA applicants who are eligible have applied at a rate of more than 70 percent.

WHAT YOU NEED TO KNOW TODAY

QUOTE OF THE DAY

“I have no intention of yielding back, Mr. Speaker.” – House Minority Leader Nancy Pelosi on the House floor Wednesday, during her more than eight-hour speech demanding House Speaker Paul Ryan commit to holding a vote on immigration reform.

Pelosi ends immigration speech after more than 8 hours, setting record. Minority Leader Nancy Pelosi set a record on the House floor Wednesday — speaking from morning until early evening on immigration and reading letters from Deferred Action for Childhood Arrivals recipients for more than eight hours — in the longest continuous speech in the House since at least 1909. (John Parkinson and Stephanie Ebbs) http://abcn.ws/2C3FYLV

Analysis: Military parade a political tug of war? After seeing France’s Bastille Day parade in July, President Donald Trump said, “It was one of the greatest parades I’ve ever seen,” referring to the annual parade which features tanks down the Champs Elysees, formations of fighter jets and more than 8,000 soldiers. (Martha Raddatz) http://abcn.ws/2E8JXwJ

Here are the current and former Trump staffers who have met with the special counsel in the Russia probe. In recent weeks, White House cooperation with Congress has changed with two words: executive privilege. (John Santucci) http://abcn.ws/2sgYGAi

The Washington Post takes a look at Defense Secretary James Mattis, a Marine who built a reputation as an aggressive warrior but is learning to play a different role: acting as a check on an impulsive president. http://wapo.st/2C5YVxC

Joshua vs Parker: Who will Anthony Joshua fight next?

In Defense of Slow, ‘From-Scratch’ Cooking