Home Politics The Pentagon is putting $1 billion toward the wall — and House... 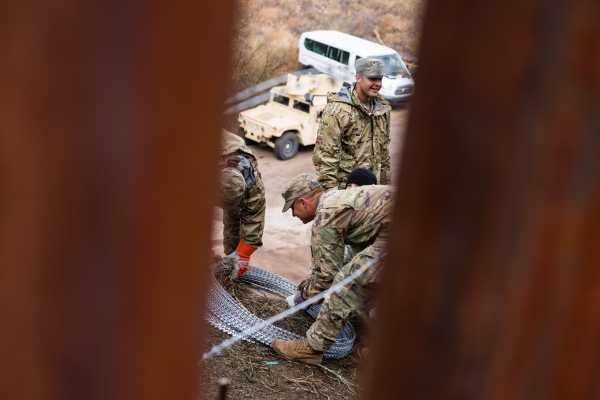 The Department of Defense is moving $1 billion out of a military personnel fund to be used to construct 57 miles of border “wall” — provoking strident (but impotent) objections from Democrats in Congress and setting up a big fight over next year’s Pentagon budget.

On Monday night, acting Defense Secretary Patrick Shanahan issued a letter to the Department of Homeland Security informing them that he’d made $1 billion “available” for wall construction, by moving it into a military account for drug enforcement — one of the three pots of money the Trump administration is tapping under its declaration of national emergency. (The logic is that the wall will impede drug-smuggling corridors, though all available evidence suggests that the majority of drugs smuggled into the US through Mexico come via official ports of entry.)

Leaders of the congressional committees overseeing the Pentagon that same day got notification of $1 billion in “reprogramming” — shifting funds from one government agency or account to another — from the military-personnel fund to the drug-enforcement fund.

House Armed Services Committee Chair Adam Smith (D-WA) formally rejected that notice in a letter today: “The committee does not approve the use of Department of Defense funds to construct additional physical barriers,” he wrote.

But the letter was meaningless.

As Smith himself acknowledged while questioning Shanahan in an oversight hearing Tuesday, the request was unilateral — it wasn’t sent to Smith and Congress for approval, and it’s not something they have the ability to stop. The only thing that congressional Democrats can do now is to reduce the Pentagon’s ability to shift money around going forward — and that’s just what they’re threatening to do.

The Pentagon isn’t asking Congress to move money for the wall. It’s telling them.

In December, Trump allowed the federal government to partially shut down as a way to pressure Congress to give him $5.7 billion in funding for physical barriers on the US-Mexico border. Congress won that standoff, ultimately giving him only $1.375 billion — but he instead declared a national emergency, using executive action to unlock billions more in wall funding from other government funds.

In order for Trump to take the $2.5 billion he promised out of the Pentagon drug-enforcement fund, though, some money had to be put into that fund from elsewhere.

Technically, the law doesn’t allow Congress to force the Department of Defense not to reprogram money. (At least, that’s most analysts’ reading of a 1983 Supreme Court decision striking down “legislative vetoes.”) But it’s been standard operating procedure — what Smith called a “gentleman’s agreement” — that the DOD will ask Congress’ blessing before moving large amounts of money around. In fact, the form sent to Congress on Monday is technically supposed to be used for cases in which “prior approval” of Congress is needed.

In this case, though, Smith acknowledged to Shanahan Tuesday that “you are not asking for our permission” or even a blessing; the DOD was going forward with the transfer whether Congress approved of it or not.

Smith described such a decision as unprecedented. But it’s something he and congressional Democrats were worried would happen when Trump signed the emergency declaration. And they made it clear that if it happened, they would take it out on the Pentagon next year — by stripping the department of its power to move any money around at all.

While Congress can’t affect reprogramming authority for 2019, it can reduce the amount of money the Pentagon is allowed to reprogram in fiscal year 2020. And House Democrats on the Appropriations and Armed Services Committees have promised to “zero out” reprogramming if the wall money was transferred without their approval.

Shanahan knew that. He told Smith that it had been a “difficult decision” to authorize the $1 billion and risk angering Congress, but that the circumstances required it.

It’s not totally clear whether the Democrats leading these House committees will be able to persuade their Senate Republican counterparts to reduce reprogramming power. Senate Armed Services Committee Chair Jim Inhofe (R-OK) told reporters when the idea was first floated that “the president does have the authority to” move money around without permission — implying that he wouldn’t be likely to punish the Pentagon over such an action. But it sets up a major fight in fiscal year 2020 over Pentagon funding, which has generally been easier to pass than some other appropriations bills.

One of many streams in the border wall funding debate

Between three years of congressional appropriations, the executive actions Trump took in February (some of which required the emergency declaration), and the White House’s 2020 budget request, it’s hard to keep track of how exactly Donald Trump is making American taxpayers pay for the wall he so badly wants. But it’s important to follow because it’s the best indication of how much has actually been done so far.

In context, the $1 billion transferred this week doesn’t look that big. But the fact that the Pentagon is willing to break with standard practice — and pick a funding fight with Congress for next year — to put that money toward the border is an indication of just how much the executive branch is backing the president up on his top priority — and how much energy congressional Democrats will have to spend fighting it.

Where is Kanye West Hiding His Alleged ‘Fleet’ of Russian All-Terrain...

The Faces of College Wrestlers |