Home Politics The Trump administration is still struggling to get its story straight on... 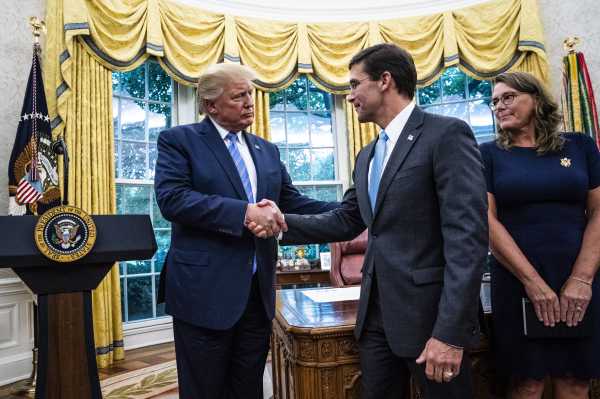 The Trump administration has given ever-changing answers about its reasons for deciding to kill Iranian military leader Qassem Soleimani, first claiming that the leader posed an “imminent threat” to the US, before suggesting that maybe the threat wasn’t so imminent after all.

The rationale took a new turn Friday evening when President Donald Trump gave Fox News’s Laura Ingraham what has been perhaps the most definitive answer so far on what the threat was; according to the president, Soleimani was planning attacks on “four US embassies,” including the one in Baghdad, which faced violent protests on New Year’s Eve.

But the president’s assertion about the four embassies has already begun to unravel, in part due to efforts by his top defense officials Sunday to string together a consistent narrative justifying Soleimani’s killing.

On Meet the Press Sunday, National Security Adviser Robert O’Brien suggested that there may not have been intelligence explicitly tying Soleimani to plans to attack embassies, saying Trump interpreted the US’s “exquisite intelligence” that stated “[Iranians] were looking at US facilities throughout the region and that they wanted to inflict casualties on US soldiers, sailors, and marines, as well as diplomats.”

O’Brien said Trump’s “interpretation” of the available intelligence — namely the conclusion that four embassies were at immediate risk — was “consistent” with what the brief said.

On Fox News Sunday, O’Brien suggested that the idea the embassies would be attacked was an assumption.

“It’s always difficult even with the exquisite intelligence we have to know exactly what the targets are,” he said, adding, “It’s certainly consistent with the intelligence to assume they would have hit embassies in at least four countries.”

Defense Secretary Mark Esper further muddied the issue Sunday morning on Face the Nation. He said that while he “believed” there “probably, could have been attacks” that put Americans in the Middle East in immediate danger, he “didn’t see” specific intelligence indicating an imminent attack on multiple embassies, an odd statement given that, as secretary of defense, Esper ought to have seen such intelligence, if it exists.

And he refused to elaborate on the existence of intelligence showing four embassies at risk on CNN’s State of the Union, saying only, “There was intelligence that there was an intent to target the US embassy in Baghdad.”

Complicating the administration’s narrative even further was a Washington Post report Friday from Shane Harris, Josh Dawsey, and Seung Min Kim indicating that US embassy officials in Baghdad were not warned of a larger imminent threat.

“The embassy in Baghdad did not receive an alert commensurate to the threat Trump described, said a person familiar with the situation, who was not authorized to comment publicly,” read the Post report.

When asked why the embassy in Baghdad was not alerted, O’Brien told ABC’s This Week Sunday that the US isn’t “going to cut and run every time someone threatens us,” before saying that the US will not have another “Tehran 1979” or Benghazi.

When asked the same question on Meet the Press, O’Brien said “this was a very fast-moving situation” and said he couldn’t “get into the details” about what action — if any — was taken to protect the other embassies Trump said were in danger.

The Trump administration’s messaging on Soleimani has been muddled from the beginning, as Vox’s Alex Ward explained:

And as Ward reported, the administration has had trouble not just explaining the rationale behind the assassination to the public, but to Congress. Republican Sen. Mike Lee called a Wednesday congressional briefing in which the administration laid out its intelligence and reasoning for the strike “probably the worst briefing I’ve seen, at least on a military issue, in the nine years I’ve served in the US Senate.”

That briefing also became an issue Sunday, as O’Brien was asked to explain why a number of lawmakers said the administration failed to mention the supposed threats to the embassies.

In his Fox News Sunday interview, O’Brien again obfuscated, saying he was not present at the congressional briefing, and that perhaps the threat wasn’t mentioned because lawmakers didn’t ask the right questions.

“I wasn’t at the briefing,” O’Brien said. “I don’t know how the Q and A went back and forth — sometimes it depends on the questions that were asked, or how they were phrased.”

He added, “All I can tell you is that we’ve been clear from the start that there were very significant threats to American facilities in the region and to American military officials, officers and men and women and also to US diplomats and I think that’s consistent with what the president’s been saying now.”

But none of the administration’s most recent statements offer any sort of proof that there was, in fact, a specific imminent threat killing Soleimani would have prevented. Nor is it clear whether the threat to the embassies existed — Trump says it did, O’Brien says Trump assumed it did, and Esper says he never saw any intelligence explicitly stating the threat existed.

Instead, the official reasons behind Soleimani’s killing are as opaque as ever, and still require Americans to take the Trump administration at its word — something that is difficult to do given the administration often lies.

Harry Kane angry after England were denied goal by referee against...

Why Trump wants to repeal an Obama-era clean water rule

How Jay-Z and Beyoncé use music to control the narrative around...