Home Politics This could be a really long government shutdown 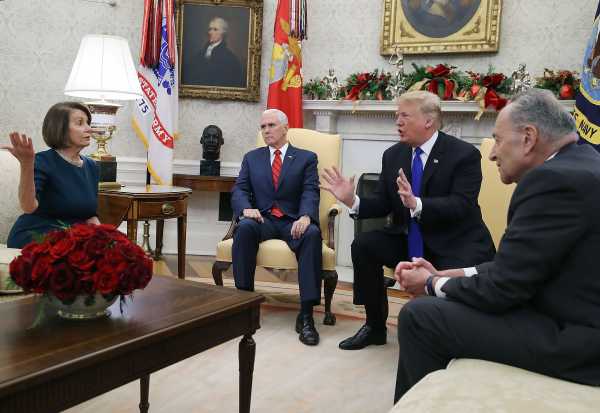 The notion that Democrats and Republicans could come together during a partial government shutdown and negotiate a deal that President Donald Trump would sign made Rep. Mark Sanford (R-SC) erupt into incredulous laughter.

“No!” exclaimed Sanford, who is spending his last days as a Congress member watching Trump say he needs $5 billion in funding for his southern border wall — even if the government shuts down.

“To the average person out there — when I talk to people at home — they say this is about personal will more than it is about bigger ideas,” Sanford said. “Sure, we have differences about the wall, but this is about Trump’s ego — that’s what this is about.”

Trump and Congress are at an impasse. They have a midnight deadline to fund roughly 25 percent of the federal government, or agencies like the Department of Justice, Interior, and most contentiously, the Department of Homeland Security, which controls construction on the southern border, will have to close their doors. Already Trump is warning on Twitter that the country is likely to enter a “shutdown that will last for a very long time.”

The longest government shutdown began in December of 1995, and lasted 21 days through the holidays. It was part of a policy debate between then-President Bill Clinton and House Speaker Newt Gingrich over cutting government spending. But Trump’s fight is fundamentally different, and it’s possible this one will outlast the ’95 fight.

The deadlock has moved past just border security policy. This is about politics. Funding the border wall is as much a personal victory for Trump as blocking funding for the wall is for Democrats. The political incentives to compromise are close to nonexistent, and no one seems to be budging.

“The president needs to decide he’d like to actually lead, and to lead requires compromise. And if not, we are going to have a long shutdown,” Sen. Chris Coons (D-DE) said.

Democrats and Republicans have already shown their cards

Trump wants a down payment on his border wall, and that appears to be as far as his game plan goes.

If the government does shut down, there’s no great negotiating strategy at play here. Trump has shown all his cards — and Republicans have too.

In the span of two weeks, Trump has held every position on this portion of government spending. He said he would be “proud” of shutting down the government over border wall funding, then signaled that he’d accept a short-term spending bill that funded the government at current levels — essentially kicking the border wall fight down the road. Now he has doubled down on blaming Democrats for bringing the government to the brink of a partial shutdown.

But a large swath of Republicans has shown they are more than comfortable passing a spending bill that doesn’t include funding for the wall. The Senate passed a short-term spending bill Wednesday that didn’t fund the wall, with bipartisan support. Trump said he wouldn’t sign it. So with pressure to heed to the president’s demands, the House passed a different funding bill Thursday, with only Republican support, that included $5.7 billion for the wall, that is stuck in the Senate.

In other words, there are enough votes in both the House and Senate among both Democrats and Republicans to pass a short-term spending bill without funding the border wall. But Congress is still stuck anyway.

“I want immigration reform, and border security has to be an integral part of that, not on its own,” Rep. Fred Upton (R-MI) said of his opposition to funding the border wall in the government spending package. That’s also the Democrats’ position.

And Trump has shown no incentive for Democrats to come to the negotiating table on this issue. They’ve offered Trump money for the border wall in the past; a lot more than $5 billion too, only to see Trump blow up negotiations for even more hardline demands, like cutting legal immigration levels.

“Imagine how frustrated I was months ago when a big bipartisan group of senators reach a deal, which we were convinced he would accept,” Coons said. That proposal gave $25 billion for the border wall in exchange for protections for young undocumented immigrants who came to the United States as children. “He turned that down. He didn’t just turn it down. He lobbied against it personally.”

Hours before the shutdown deadline, Trump met with Republican senators reportedly without an end game. He tried to convince senators to nuke a longstanding Senate rule that requires 60 votes to pass a spending bill, and pass border wall funding with just Republican support — a conservative pipe dream that doesn’t have enough support to actually happen.

The politics of the border wall aren’t conducive to compromise

The border wall is popular with Trump’s base, which is a large part of why he’s adamant about fighting for it.

But it isn’t popular, overall — especially shutting down the government over the wall.

According to a poll from National Public Radio/Marist last week, only 36 percent of Americans said the border wall was worth shutting down the government. Roughly two-thirds of Republicans side with Trump on this issue, whereas overall, support for the border wall hasn’t topped 40 percent. Democrats are listening to their base too, and for them blocking the border wall is the most tangible show of resistance to Trump’s hardline immigration agenda.

Democrats will also hold the House majority in just a matter of days — meaning they feel their negotiating position will only get stronger the longer they wait.

This will be a game of chicken between Democrats and Trump. If Democrats can stick together in withholding votes for Trump’s border wall, the president will eventually be forced to cave — or risk telling Border Patrol or TSA officers that their paychecks will have to wait a little bit longer.

UK Care Minister Laughs When Asked Whether 4,000 People Have Died...