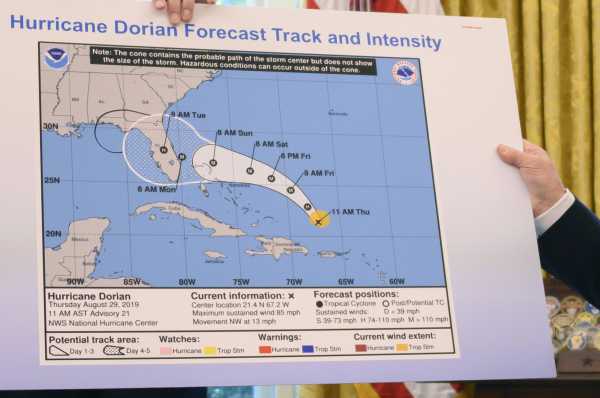 President Donald Trump, after being criticized for his untrue statements that Alabama was in the path of Hurricane Dorian, displayed an altered version of an official government map of the storm’s path — promoting what appears to have been someone in the White House’s casual violation of federal law.

Weather reporters and experts noticed the alteration on a White House video of Trump discussing the storm, which has killed seven people in the Bahamas and is likely to cost the Caribbean country billions of dollars.

In it, the black marker half-circle extends the actual forecast of the storm’s path into the southeastern corner of Alabama. Weather.com’s Kait Parker noted this was also a “very outdated” graphic.

Speculation quickly turned to whether Trump had been trying to cover for his claim that Alabama would be hit by the hurricane (which, to be clear, is heading up parallel to the East Coast). The National Weather Service office in Birmingham apparently felt the need to clear the matter up 20 minutes later.

The Washington Post’s Capital Weather Gang wondered whether Trump had been using the map to rationalize his mistake and also pointed out issuing false or altered official weather forecasts is a violation of US law:

We do not, however, yet know who actually did the altering. Trump is just pointing to it in the White House video.

In reality, Dorian is now moving up the East Coast, parallel to the Floridas. It remains possible the storm will hit the Carolinas, and there will be serious rain and wind along the coast from the storm, but it appears for now the Bahamas has ended up hit the hardest. Vox has covered some of the most effective ways to give to charity to help people there.