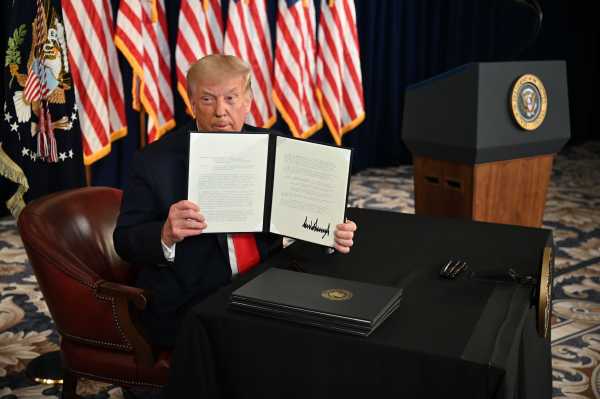 Trump’s use of executive authority comes after Senate Republicans and House Democrats failed to settle on the contents of the US’s next coronavirus relief package in more than two weeks of contentious negotiations. In those negotiations, Democrats hoped to extend the $600 federal unemployment insurance benefit created by the CARES Act, to broaden the scope of eligibility for stimulus checks, and to expand federal aid to states and cities.

Republicans were divided in their goals, with Trump pushing for a payroll tax cut many in his party weren’t in favor of; some Senate Republicans advocating for a reduced employment benefit and limited aid to cities and states; and other Republicans demanding that the federal government not go into further debt with relief packages.

Saturday, Trump cast lawmakers’ inability to reach a deal as Democrats’ fault, and in a press conference at his private golf club in Bedminster, New Jersey, that featured wide-ranging attacks on his political rivals and the press, announced the four executive orders. It remains unclear whether Trump has the legal authority to unilaterally fulfill all of the specific pledges he made during his announcement, however.

The first order addresses the unemployment insurance issue. As Vox’s Li Zhou and Ella Nilsen have reported, about 32 million Americans depended on the federal program to boost state unemployment payments to levels that made paying their bills possible. That program expired on July 31, leaving August’s bill payments in doubt.

Trump’s order would give unemployed people an expanded benefit of $400 per week, but exactly when they can expect to receive these benefits is unclear — as are the overall specifics. Trump said that $300 of the expanded benefit will be paid by the federal government, and $100 of it would be provided by states. But due to the pandemic-induced recession and inadequate federal aid, many states are bleeding money and being forced to cut back on vital social services; some political observers say it’s hard to envision how some states would be able to foot the bill for their quarter of the extra unemployment insurance. It’s also unclear where exactly the federal funds would come from.

Another issue with the order is its questionable legality, some experts note. “I seriously have been running through all I know about [unemployment insurance] and cannot figure out a single legal way to increase it through [executive order],” tweeted Michele Evermore, a senior policy analyst at the National Employment Law Project.

A payroll tax cut, the second executive order, was a key White House priority in the bipartisan stimulus negotiations; Democrats and some Republicans were against it. But Trump announced he would institute a tax holiday for Americans earning less than $100,000 per year. The holiday would retroactively be in force starting August 1, and last through December. Trump added he would seek to make the payroll tax holiday a permanent cut if reelected president, meaning those who benefited from it would then not have to pay back taxes.

The third action addresses the federal moratorium on housing evictions that expired in July, leaving an estimated 12 million renters in danger of losing their homes. The housing order instructs the secretaries of Housing and Urban Development, Health and Human Services, and the Treasury to consider limiting both evictions and foreclosures. Any protections would last through the end of the year, as would the benefit extended by the fourth order: keeping student loan interest at zero percent, and freezing loan payments.

Trump framed his signing of the executive actions as an attempt to break gridlock, and a necessary maneuver for ending Democratic stonewalling in negotiations.

Senate Majority Leader Mitch McConnell immediately backed Trump’s move, and took a swipe at Democrats. “I am glad that President Trump is proving that while Democrats use laid-off workers as political pawns, Republicans will actually look out for them,” he said in a statement on Saturday.

When first floating the idea of the executive orders, Trump dismissed concerns about lawsuits over the legality of the move, and did so again Saturday, predicting that any legal challenge “will go very rapidly through the courts.”

An analysis by Reuters’ Patricia Zengerle written in advance of Trump’s executive actions took a different view, noting, “The Constitution puts control of federal spending in the hands of Congress, not the president, so Trump does not have the legal authority to issue executive orders determining how money should be spent on coronavirus. Democrats said executive orders would prompt a court fight, but legal action could take months.”

Trump suggested Saturday that lawsuits will not materialize, saying, “If we get sued, it’s somebody that doesn’t want people to get money, okay, and that’s not going to be a very popular thing” — seeming to suggest that if Democrats issue legal challenges to the executive orders, Republicans will argue Democrats are depriving the public of something badly needed.

But there may be an advantage to interrogating the legality of the orders. Democrats have a political interest in maintaining leverage through the legislative process: If a court rules relief has to come through Congress, then Democrats can get more of what they actually want into the final relief law, including things like robust aid to states and cities, funding for the November election, and potentially more money for enhanced unemployment insurance.

Masha Gessen on American politics after the death of “truth”

Prince Philip Stays At Hospital For Over a Week