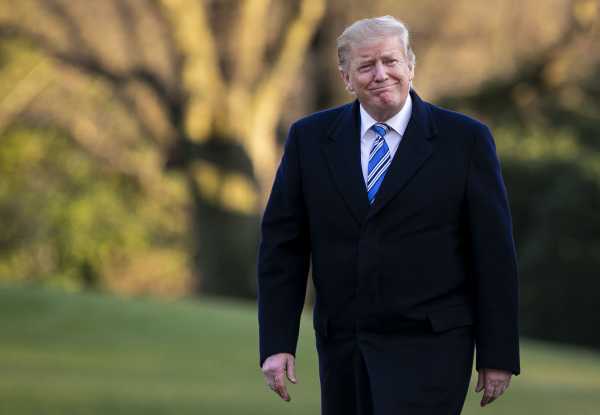 The Trump administration released its third budget proposal on Monday. Titled “A Budget for a Better America,” the $4.7 trillion budget includes a dramatic increase in defense spending and $8.6 billion for Trump’s border wall and deep cuts to social safety net programs, including Medicare. The budget is highly unlikely to go anywhere in Congress. (Vox’s Tara Golshan has a full explainer on the Trump budget proposal.)

But also embedded in Trump’s proposal are some very good projections for economic growth — a little too good, probably, when compared to more realistic government and private estimates.

The White House is estimating that the US economy will grow at a 3.2 percent rate in 2019 and then average about 3 percent growth annually for the next decade. By comparison, the Congressional Budget Office estimates that GDP growth will be 2.3 percent this year and then average 1.7 percent from 2020 through 2023 and 1.8 percent from 2024 to 2029. Goldman Sachs estimates GDP growth will slow to 2.5 percent this year; Morgan Stanley estimates 2.3 percent.

“It’s a fake forecast,” Mark Zandi, the chief economist at Moody’s Analytics, told me. “No chance the administration will get the kind of growth they are using for their budget.”

Kyle Pomerleau, an economist at the Tax Foundation, noted on Twitter that the White House is implying it believes GDP will be 12 percent higher in 2029 than the CBO does. “Looking at the annual difference in growth rates between the [White House] and CBO kind of understates how bonkers the [White House’s] growth assumptions are,” he wrote.

That the Trump administration would be overly optimistic about economic growth is not surprising — Trump has been promising what most economists agree are unrealistic growth promises for years. On the 2016 campaign trail, he said that through tax cuts and deregulation he would boost GDP growth to 3.5 percent. And since landing at the White House, the administration has consistently promoted exaggerated growth promises.

Trump’s policies contributed to the boost, namely the 2017 tax cut bill, deregulation, and increased government spending. But a lot of that juice is likely to run out soon. Many economists say the short-term growth effects of the tax cuts will end by 2020.

But in continuing to promise growth that probably isn’t going to happen, the Trump team is setting itself on a track where it’s almost guaranteed to underdeliver. And as CNBC’s John Harwood recently noted, putting out extra-high economic estimates isn’t just a Trump problem — it’s a Republican one. Jeb Bush in 2015 said he would get to 4 percent annual growth. Trump, always eager to one-up others, said he would get to 5 or 6 percent. The GOP has continually oversold how good the tax cuts will be for the economy.

This is also a way to downplay the debt problem

Republicans don’t seem too concerned with deficits and the rising US debt anymore compared to when Obama was in office, but Trump’s over-the-top economic estimates are still a way to try to downplay what his proposals would mean for the debt.

Roll Call noted that Trump’s budget projects $2.8 trillion in additional revenue compared to the CBO over the next 10 years. But if its forecast is off and the CBO’s is right, any deficit savings are going to disappear. And the tax bill has already caused the deficit to swell.

The Committee for a Responsible Federal Budget, which advocates for fiscal responsibility, estimates that the Trump budget would add more than $10 trillion to the national debt. The group’s president, Maya MacGuineas, in a statement on Monday slammed the Trump administration for its “fantasy assumption” on GDP growth. “Every independent forecaster foresees growth to average closer to 2 percent over the next decade,” she said. “Assuming an extra point of growth serves no purpose but to mask the high deficits and debt likely to materialize under the president’s budget.”

And even with its rosy assumptions and deep cuts to spending, the Trump budget still anticipates it won’t balance for another 15 years.

“Somewhere in the budget is getting back to balance, and they can’t do it unless they assume these outside growth numbers,” Zandi said.

The news moves fast. Catch up at the end of the day: Subscribe to Today, Explained, Vox’s daily news podcast, or sign up for our evening email newsletter, Vox Sentences.

Which records have Manchester City broken this season – and which...

Why willpower is overrated

F1 in 2018: Australian GP offers hope and ambiguity about the...