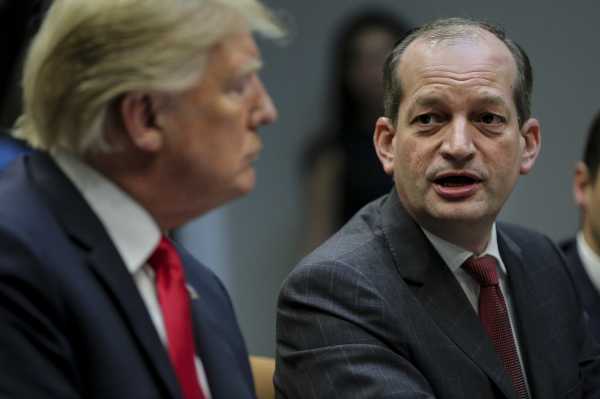 Wealthy and well-connected money manager Jeffrey Epstein was able to avoid prison time in 2008 despite allegations that he abused dozens of underage girls, the Miami Herald reported in November.

Now senators on both sides of the aisle are calling for an investigation into how that happened.

As Julie K. Brown reported in the Herald, Epstein was granted a “non-prosecution agreement,” which allowed him to serve just 13 months in county jail, and which was kept secret from the women who said Epstein had abused them. (Epstein has said that any encounters he had with his accusers were consensual, and that he believed they were 18 at the time.) The US attorney in Florida who signed off on the agreement was Alexander Acosta — now President Donald Trump’s secretary of labor.

Sens. Patty Murray (D-WA) and Tim Kaine (D-VA), along with 14 other Democrats, sent a letter to the Department of Justice last Thursday calling for an investigation into the agreement and Acosta’s role. “We are deeply concerned by Mr. Epstein’s horrific, serial abuse of children and new revelations about the process by which he was given, to quote the Herald, ‘the deal of a lifetime,’” the senators wrote.

Meanwhile, Sen. Ben Sasse (R-NE) has sent his own letters to the Justice Department asking for an investigation. And Sen. Marco Rubio (R-FL) has said the possibility that “political influence” kept Epstein out of prison is “very troubling.”

The Justice Department has acknowledged receipt of the Democrats’ letter but has offered no other response, according to a spokesperson for Murray. And when Democrats take control of the House in January, they will have the power to launch their own investigation into Acosta’s handling of Epstein’s case. A spokesperson for the Labor Department told Vox that if the Justice Department investigates, Acosta “welcomes the opportunity to participate.”

Epstein may have scored something of a victory last week, with a settlement that — yet again — prevented women from testifying against him in court. But calls for an investigation are a reminder that, thanks in large part to Brown’s extensive reporting, the scrutiny into Epstein and Acosta is far from over.

According to court and police records reviewed by Brown, Epstein routinely had underage girls brought to his Palm Beach, Florida, home to give him massages, during which he often sexually abused them. He sometimes asked the girls to recruit more girls, Brown reports, in what one detective called a “sexual pyramid scheme.”

But thanks to the agreement struck with Acosta’s office, Epstein received an extremely lenient sentence, some of which he was allowed to serve on “work release” in a comfortable office, Brown reported. The agreement also granted immunity to “any potential co-conspirators,” meaning that if any of Epstein’s many powerful friends — a group that includes Trump and Bill Clinton — were involved in his crimes, they would not be prosecuted.

It’s not entirely clear how Epstein was able to get such a deal. In a 2011 statement, Acosta said that Epstein’s team had mounted a “year-long assault” against prosecutors, digging into their personal backgrounds. Epstein also provided unspecified information to the federal government, possibly relating to the 2008 financial crisis.

In their letter, Murray and Kaine ask the Justice Department to investigate whether Epstein’s agreement followed the law and Justice Department policy, and to find out how much Acosta was involved. “Was Mr. Acosta the individual ultimately tasked with approving the terms of the agreement, including the immunity provisions?” the senators ask.

Sasse, meanwhile, does not explicitly pose questions about Acosta in his letters, as NBC News reports. But in one, he quotes Brown’s statement that “Acosta not only buckled under pressure from Epstein’s lawyers, but he and other prosecutors worked with them to contain the case, even as the FBI was uncovering evidence of victims and witnesses in other states.”

“I am particularly disturbed by this reporting indicating that federal prosecutors went out of their way to arrange this sweetheart deal for Epstein and conceal it from the women and girls that he abused who could have objected to it, in apparent violation of federal law,” Sasse writes. “We need answers about this epic miscarriage of justice.”

Rubio, an early supporter of Acosta, told Glenna Milberg of WPLG, a Florida ABC affiliate, “that man should have been in jail for a long time. And if it was political influence that allowed him to get a better deal, that would be very troubling.”

He added, however, that Acosta has “done a good job as labor secretary.”

“Hopefully he’ll get an opportunity to address his justification for what happened; until then, I would reserve judgment,” Rubio said.

Acosta has not commented publicly on the Herald report.

“For more than a decade, this prosecution has been reviewed in great detail by newspaper articles, television reports, books, and Congressional testimony, and has been defended by the Department of Justice in litigation across three administrations and several attorneys general,” a Labor Department spokesperson said in an email to Vox. “If the Department of Justice’s Office of the Inspector General chooses to review this matter, Secretary Acosta welcomes the opportunity to participate.”

In January, House Democrats could launch their own investigation

So far, the Justice Department has not shown any willingness to investigate Acosta. But in January, Democrats will take control of the House, meaning they’ll have subpoena power and can launch their own investigation if they choose. Fifteen House Democrats, including Reps. Debbie Wasserman Schultz and Al Lawson of Florida, sent their own letter to the Justice Department last week calling for an investigation into Acosta’s role in Epstein’s case.

These calls come at a time when Trump’s nominees are receiving increased scrutiny, including from Republicans. As Vox’s Jane Coaston reports, Sen. Tim Scott of South Carolina, the only black Republican in the Senate, voiced his opposition last week to judicial nominee Thomas Farr, who has supported voter suppression efforts. “We should stop bringing candidates with questionable track records on race before the full Senate for a vote,” Scott wrote in a letter to the editor in the Wall Street Journal.

Democrats have long charged that Republicans are trying to rush Trump’s nominees — from Acosta to Supreme Court Justice Brett Kavanaugh — through the confirmation process. Senate Democrats raised concerns about Acosta’s involvement in the Epstein case before he was confirmed. In March 2017, before Acosta’s confirmation hearing, Murray sent a letter to the Justice Department seeking documents on the case. The department did not provide the documents, and Acosta was confirmed the following month.

Whether the revelations about Epstein will have an impact on Acosta’s tenure at the Labor Department, or on future handling of Trump’s nominees, remains to be seen. But the Herald report has already, it appears, affected Acosta’s career in one way.

According to Axios, Acosta was floated as a possible attorney general after the departure of Jeff Sessions earlier this year. Now White House officials are saying he’s no longer in the running.