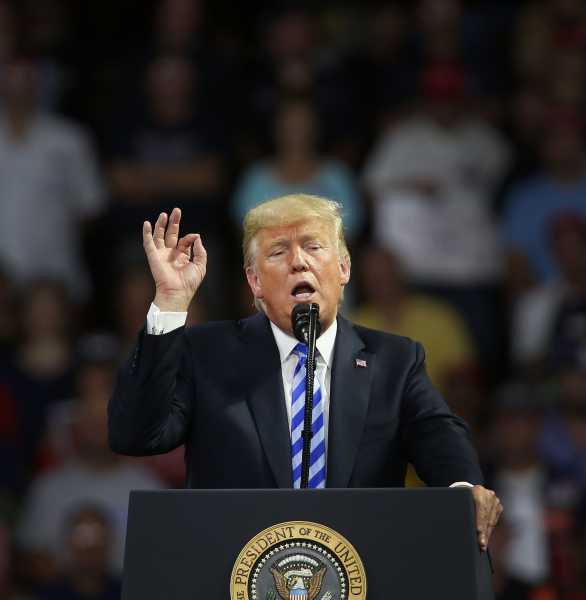 This summer, Paul Manafort was found guilty of a broad range of financial crimes, including $30 million in illegally unpaid taxes plus a couple of bank fraud charges and a crime related to failure to engage in proper financial reporting. Manafort later pleaded to separate crimes touching on obstruction of justice and illegal lobbying related to Ukraine.

Yesterday, President Donald Trump confirmed that he is open to pardoning Manafort for these crimes.

Speculation that Trump might pardon Manafort — and the reality that Trump has already broken with the normal pardon procedure a number of times — has been sufficiently widespread for a year or more; Trump’s remarks on this front were a second-tier news story at best.

What’s more, Trump has a well-earned reputation for saying things he doesn’t follow up on. The mere fact that he’s floating a Manafort pardon doesn’t mean that one will happen.

Nonetheless, in this case, not only would a pardon be a stunning abuse of power — even publicly dangling the pardon is. By traditional standards of American governance, these are clear impeachable offenses. But Republicans in Congress have stood behind Trump regardless of how inappropriately he’s behaved, which makes moving forward with the congressional impeachment process pointless.

The fact that Trump’s co-partisans decline to restrain him in any way makes the American constitutional system borderline unworkable.

The stage was set for this abuse, fundamentally, during the transition winter of 2016 to 2017.

One consequence of the media not taking Trump’s odds of victory seriously during the campaign was that his hazy campaign season promises to put his assets in a blind trust if he won the election were never seriously scrutinized. A blind trust is a device that works for wealthy presidents (like George W. Bush) whose net worth primarily consists of liquid financial assets — stocks, bonds, and the like. Those kinds of assets can be placed into a trust that is temporarily controlled by a financial manager, with the understanding that the beneficiary of the trust won’t have access to information about which stocks exactly he owns.

But Trump owned operating businesses — often businesses with his name on them — so his ownership could not be easily obscured, and it was far from clear what his promises to avoid financial conflicts of interest amounted to.

This, however, puts the cart before the horse. Conflicts of interest are objective situations that arise when a person’s financial interests can be counterpoised to their public responsibilities. Conflict of interest laws attempt to ensure that those conflicts don’t arise.

Trump, however, clearly has conflicts of interest — Saudi government customers turned around his hotel business in New York, for example, and Trump also makes US policy toward Saudi Arabia.

Trump took the line that because he could, legally speaking, get away with doing nothing to avoid conflicts of interest, he should, politically speaking, be allowed to get away with doing nothing. Republicans in Congress universally accepted this preposterous arrangement as good enough for them, and set the stage for abusive legalism to become an ongoing theme of Trump’s presidency.

The Comey firing and pardon abuses

The next stage came when Trump fired FBI Director James Comey in a transparent effort to stymie any further investigations into Russia and the 2016 election.

His defense for this move has been, from the beginning, the unquestioned reality that the president has the legal authority to fire executive branch officials. The essence of abuse of power, however, is that an official is abusing powers he genuinely possesses. Trump is commander-in-chief of the US armed forces, but to exercise that authority to have troops do groundskeeping work at his golf courses would be an abuse of that authority.

By the same token, while the president obviously has the ability to make decisions about staffing his administration, to make those decisions in order to selectively shield friends and allies from criminal liability is a fatal threat to the rule of law.

Many conservatives appear to have made their peace with this initial abuse on the theory that there was no underlying crime of collusion that Trump himself is personally guilty of. My view is that there is plenty of evidence of collusion. But the reality is that if you think the Comey firing wasn’t about a personal cover-up, that makes the abuse worse — not better.

If Trump fired the FBI director to protect Manafort and Michael Flynn from unrelated white-collar crime charges, that’s a huge threat to the American legal system. Regulators and prosecutors need to be able to pursue actions against people who may have political, social, or business ties to important politicians without fear or favoritism. Trump’s refusal to address financial conflicts of interest only makes this concern more acute.

Mercifully, for a brief moment, congressional Republicans actually did take this abuse of power seriously and called for the appointment of a special counsel. Deputy Attorney General Rod Rosenstein took those calls seriously and made a strong choice of Robert Mueller with his appointment — probably thinking that congressional Republicans would back him up.

Republicans have given Trump the green light for abuse

Instead, congressional Republicans have made it clear over the past year that Trump has the green light for further abuses of power.

This started in August 2017, when Trump went outside the normal procedure to pardon former Sheriff Joe Arpaio, who’d been convicted of violating court orders. Arpaio was clearly guilty and hadn’t done anything to demonstrate remorse or make restitution. Trump was simply handing out a favor to a political supporter and a guy he liked, while demonstrating his basic contempt for the rule of law.

But it continued as Trump began to meddle with FBI and DOJ personnel decisions, berate Rosenstein and Attorney General Jeff Sessions for allowing a special prosecutor to be appointed, and launch the absurd argument that Mueller was pursuing a personal vendetta about golf course membership fees.

There is, again, nothing wrong with a president deciding he’s had a change of heart about executive branch appointees. But Trump never even developed a pretext of having some kind of policy or performance disagreement with Rosenstein and Sessions — it was clear he was angry at them purely because their actions had led to the appointment of a special counsel, a move that congressional Republicans specifically requested at the time to help get them off the hook for needing to take a clear stand on the propriety of firing Comey.

They were, instead, largely hung out to dry by their ideological allies. This left Democrats in the absurd position of needing to halfheartedly defend Sessions’s integrity even while disagreeing with him nearly across the board on policy.

Then came the inevitable denouement in which Trump fired Sessions, former Sessions allies like Lindsey Graham defended Trump’s firing, and then Trump installed the plainly unsuitable Matthew Whitaker as acting attorney general with no plans to appoint a real one, all with nary a peep from Capitol Hill.

Trump, under pressure but also emboldened by the response to all this, is now dangling pardons for Manafort.

There is no legitimate argument for pardoning Manafort

The reason to dangle a pardon before Paul Manafort is obvious: He’s clearly guilty of serious financial crimes, in major legal trouble because of his guilt, and is also in a position to offer damaging testimony against members of Trump’s inner circle. Trump, however, is in a position to get Manafort off the hook legally if Manafort agrees to protect him, his family, and his associates.

That would be a straightforward transaction, and the US Constitution is clear that Trump has the legal authority to do it.

Or, indeed, to do any kind of pardoning he wants. If a deranged Trump fan were to get a gun and massacre Mueller’s entire team on the streets of Washington, for example, Trump would have the unquestionable legal authority to pardon the killer. DC is not a state, so murder is a federal crime there — and Trump can pardon anyone for any violation of federal law for any reason.

But there is no legitimate purpose for pardoning Manafort, who is simply guilty of crimes and facing the normal punishment for them laid out in law. There are no mitigating circumstances here or a reasonable argument for showing unusual leniency. There’s simply the fact that Manafort is in a position to do Trump a favor, so Trump might do him a favor. This is not a legitimate use of the pardon power, any more than selectively shielding associates from legal scrutiny is a legitimate use of the power to fire executive branch appointees.

Republicans on the Hill who quietly agree that this is inappropriate tend to ask what critics would have them do. The answer is fairly clear, however. It would only take a handful of Republican senators to use their powers of office and hold up the GOP agenda until Trump agrees to start conducting himself in a more proper manner.

In response to that, however, they ask why Republicans should be expected to stymie conservative judicial appointments they like merely because they disagree with Trump about something else. The answer, again, is clear: because upholding the rule of law is important, and sometimes you need to make sacrifices to do it.

But if you don’t want to go down that road, this is exactly what impeachment is for. It is extremely understandable that Republicans would prefer Trump, for all his flaws, over Hillary Clinton or Bernie Sanders or Kamala Harris or some other Democrat whose policy ideas they profoundly disagree with. The practical alternative, however, is not Trump or a Democrat — it’s Trump or Mike Pence, a person I’m not a big fan of but who has not been abusing his power in this kind of way.

To expect Republicans to actually do this is wishful thinking to the point of being corny. But the fact remains that, over and above whatever policy disputes or agreement one might have with him, Trump is engaged in an ongoing, systematic attack on the rule of law. And he’s doing it right out in the open.

Maybe voters aren’t as uninformed as elites like to think

Over 100 Missiles Fired From Russian Warships During Syrian Operation –...