Home Politics Trump wants his name on millions of stimulus checks, even if it... 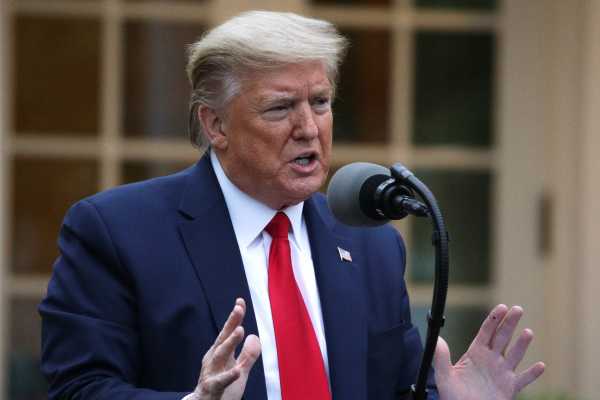 Between the multiple Trump Towers, Trump Plazas, Trump International Resorts, and the now-defunct Trump Steaks, it’s clear President Donald Trump has a penchant for putting his name on things. And that predilection has now been extended to include the coronavirus stimulus checks.

The Treasury Department on Monday ordered that Trump’s name appear on the paper checks being rushed to millions of people by the IRS.

Those checks could end up being delayed a few days in order to add the president’s name to them, according to senior IRS officials. In order to add Trump’s name — which will appear in typeface rather than as a signature given the checks are from the Treasury rather than from the president — the code in the IRS’s computers must be tweaked and subsequently tested.

“Any last minute request like this will create a downstream snarl that will result in a delay,” Chad Hooper, a quality control manager who serves as national president of the IRS’s Professional Managers Association, told the Washington Post.

A Treasury Department representative denied that the change would result in a delay, however. “Economic Impact Payment checks are scheduled to go out on time and exactly as planned—there is absolutely no delay whatsoever,” the representative said in a written statement to the Post.

It’s clear that many Americans need their stimulus checks as soon as possible. Over the past three weeks, there have been 16.8 million new initial claims for unemployment as restaurants, retailers, and other nonessential businesses have been shuttered to limit the spread of the virus. The scale of this crisis has some lawmakers calling for more stimulus funds, as Vox’s Dylan Matthews explained:

Regardless of whether the stimulus will work or if Congress will need to authorize more spending, Trump seems determined to grab whatever political credit comes from it.

The IRS, which is responsible for distributing the checks, is supposed to be a nonpartisan agency, and it has held to that tradition since former President Richard Nixon targeted political opponents, including civil rights groups, reporters, and prominent Democrats, with tax audits. After that, Congress enacted laws to ensure that the agency operates apolitically.

Trump’s move, critics fear, changes that. They argue this move is a blatantly political attempt to tie the president to the popular stimulus checks, even though Trump had initially pushed for a payroll tax cut rather than direct stimulus.

House Speaker Nancy Pelosi slammed the president for injecting politics into a process meant to help everyday Americans. “Delaying direct payments to vulnerable families just to print his name on the check is another shameful example of President Trump’s catastrophic failure to treat this crisis with the urgency it demands,” she said in a statement Wednesday.

Trump has long argued that putting his name on things is important branding, remarking on a tour of George Washington’s estate early in his presidency, “You’ve got to put your name on stuff.”

This is the first time a president’s name will appear on an IRS disbursement. The president reportedly initially pushed to have his name appear on the signature line; however, presidents are not authorized signers for legal disbursements from the Treasury Department. As a result, the president’s name will appear in the memo line, just below a note saying “Economic Impact Payment,” according to administration officials.