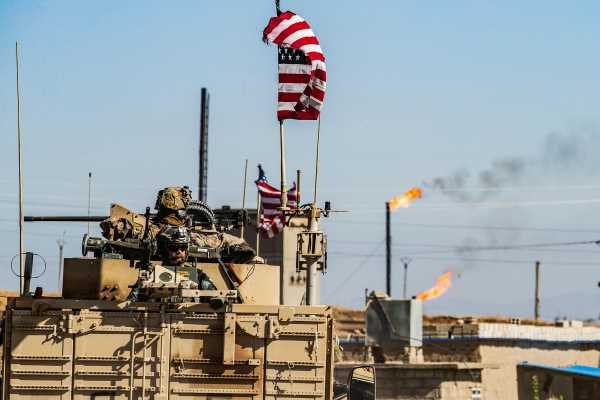 What exactly the US military’s new mission is in Syria keeps changing depending on whom you ask.

Following President Donald Trump’s abrupt announcement early last month that nearly all US troops would be withdrawing from northeastern Syria — effectively abandoning America’s Kurdish allies in the region — he reversed course, announcing that US troops would be staying in Syria after all. Only now, their mission was to secure oil fields in other parts of the country.

And Trump was clear about who that oil would belong to: “We’re keeping the oil — remember that,” he told a gathering of Chicago police officers in late October. “I’ve always said that: ‘Keep the oil.’ We want to keep the oil. Forty-five million dollars a month? Keep the oil.”

Unfortunately for Trump, it seems the US military isn’t so keen on that idea — perhaps because stealing Syria’s oil could constitute a war crime. On Thursday, the Pentagon’s top spokesperson told reporters in no uncertain terms that the US would not be keeping any of the revenue from those oil fields.

“The revenue from this is not going to the US. This is going to the SDF,” Pentagon spokesperson Jonathan Hoffman said, using an acronym for the Kurdish-led, US-allied Syrian Democratic Forces.

I checked with others in the government to ensure that was actually the policy. Turns out that it is. “The SDF is the sole beneficiary of the sale of the oil from the facilities they control,” a senior administration official told me.

This is all incredibly confusing, for several reasons.

First, Trump has repeatedly said he wants to get out of wars in the Middle East. Last month, he vowed to withdraw all 1,000 troops from Syria, saying that the situation there wasn’t America’s problem anymore. “Let someone else fight over this long-bloodstained sand,” the president said during a White House speech on October 23.

Yet just a few days later, Trump changed his mind, apparently deciding that fighting in the Middle East is worth it as long as you get some sweet oil revenue out of the deal.

And now, it seems the US isn’t actually getting any oil revenue out of the deal after all — which means Trump’s main reason for deciding to keep troops in the US once again makes no sense whatsoever.

US troops still don’t really know what their mission is

Trump expanded the US military’s mission in Syria on Wednesday, authorizing hundreds of troops to operate in a roughly 90-mile area in eastern Syria. Hoffman, the top Pentagon spokesperson, told reporters Thursday that the president’s authority to send troops on such a mission derives from his responsibility to protect Americans from terrorists.

Starving ISIS of oil revenue — which has become the administration’s “official” justification for the mission — does just that, he said.

But this complicates matters for US forces. What if Syrian or Russian forces try to take the oil by force? What about Turkey, a NATO ally, which has moved further into northern Syria after Trump’s withdrawal order last month?

Trump seems to be fine with US troops fighting off those who want to control the dilapidated oil rigs. “We may have to fight for the oil. It’s okay,” he said during an October 28 press conference after announcing the death of ISIS leader Abu Bakr al-Baghdadi. “Maybe somebody else wants the oil, in which case they have a hell of a fight.”

As as American forces are concerned, then, they are allowed to shoot at someone, but it’s unclear who. Lawyers reportedly are still working all that out.

That the Trump administration’s policymaking process is so haphazard is one thing. That it’s so chaotic on a matter of war, peace, and high-stakes global politics is entirely another.

A vaccine we don’t even use anymore is a reason polio...

Seeds, the Gateway Drug to Gardening |