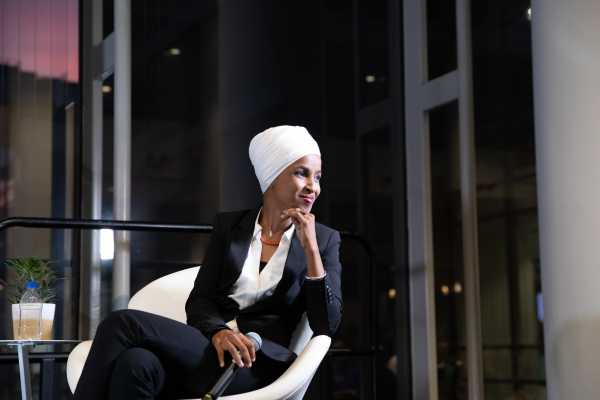 Twitter suspended the account of one of Rep. Ilhan Omar’s Republican challengers, Trump-aligned Danielle Stella, after she tweeted about hanging the Minnesota congresswoman.

Stella is running for Omar’s seat in the House of Representatives, and her campaign account (@2020MNCongress) tweeted on Tuesday: “If it is proven @IlhanMN passed sensitive info to Iran, she should be tried for #treason and hanged,” according to The Washington Times, which first broke the news of the suspension. She then tweeted out a link to a conspiracy theory alleging Omar gave that country sensitive information, along with an image of a stick figure being hanged.

The conspiracy theory that Omar was recruited by Qatari officials to pass on classified information to Qatar and Iran is backed by zero evidence. The congresswoman has denied these accusations and called them “outlandishly absurd.” Nevertheless, the theory continues to be spread.

The Washington Times confirmed with Twitter on Wednesday that Stella’s account was permanently suspended for repeatedly violating the platform’s rules.

“My suspension for advocating for the enforcement of federal code proves Twitter will always side with and fight to protect terrorists, traitors, pedophiles and rapists,” she told The Washington Times.

In a separate Facebook post on Friday, Stella said she wanted to clarify that she wasn’t threatening anyone: “You are making this into something it’s not,” she wrote. “You are making it about race, about religion, about anything but the truth.”

This isn’t the first time Stella has called for action against Omar. Earlier this year, she said it was unlawful for Omar to advise immigrants on how to avoid US Immigration and Customs Enforcement agents, the Guardian reported. She said lawmakers who don’t “uphold the rule of law” should not remain in office.

Omar, a progressive freshman and one of the first Muslim women elected to Congress, is no stranger to baseless accusations and death threats. After Stella’s account was suspended, she blamed “an entire political party and its media outlets” for creating an environment that normalizes “anti-Muslim dogwhistles and dehumanization.”

In April, the congresswoman said she had seen an uptick of death threats after President Donald Trump repeatedly accused her of downplaying 9/11.

“Violent rhetoric and all forms of hate speech have no place in our society, much less from our country’s Commander in Chief,” she wrote at the time. “We are all Americans. This is endangering lives. It has to stop.”

In July, Trump told her and a group of other progressive freshmen congresswoman to “go back” where they came from. A few days later, Trump supporters targeted Omar by chanting “Send her back” during one of his rallies, despite Omar being a naturalized US citizen who came to the country from Somalia as a refugee at the age of 12.

And Patrick Carlineo pleaded guilty on November 19 to verbally threatening the congresswoman: “Why are you working for her, she’s a fucking terrorist? I’ll put a bullet in her fucking skull,” he told one of her staffers on the phone in March.

A number of Trump’s tweets, like his July attack on Democratic congresswomen of color, would seem to violate Twitter’s ban on hate speech. The platform has argued that some tweets, especially presidential ones, ought to be preserved even if they break its terms of service for their historical and news value.

This has led to a conundrum articulated by Recode’s Theodore Schleifer like this: “How can it protect free speech rights and ensure citizens can see world leaders’ tweets that are of public interest, while also making Twitter a safer place for dialogue?”

Until July, Twitter tried to strike that balance by simply declining to take down these posts deemed offensive but noteworthy. Now it says it labels offensive tweets from world leaders with a “notice — a screen you have to click or tap through before you see the Tweet — to provide additional context and clarity.”

Facebook has refused to implement any similar feature, as was evident in its initial response to Stella’s hanging post. The candidate posted a message similar to her tweet about Omar on Facebook. The social media giant told Alex Kaplan of Media Matters on Wednesday that the post “doesn’t violate our Community Standards.” By Saturday afternoon, however, Facebook had reversed its decision and deleted Stella’s post.

There is no evidence of this, and both companies, under current law, have the right to make their own rules and police their users as they see fit. But the responses of Facebook and Twitter to Stella’s posts are likely to provoke the ire of conservatives, seeing them once again claiming the platforms are impugning their right to free speech, regardless of whether that speech contains threats of violence.

The Carnage and Chaos of Childish Gambino’s “This Is America” |