Home Politics We get it, rich guys are not into Elizabeth Warren 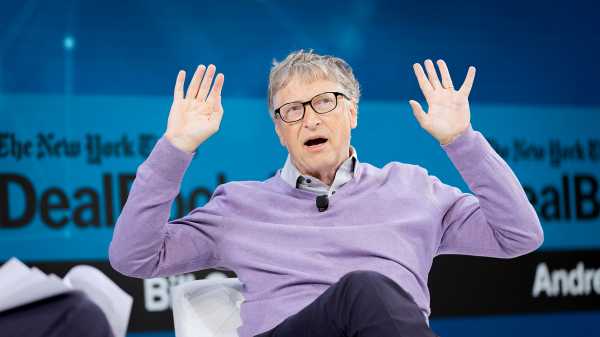 Leon Cooperman is worth more than $3 billion. He spent 25 years at Goldman Sachs before starting his own hedge fund, which in 2017 reached a $4.9 million settlement with federal regulators over insider trading charges while admitting no wrongdoing. And this week, he cried about Elizabeth Warren on CNBC. “I care,” Cooperman said.

Now, there is absolutely nothing wrong with crying on television or anywhere else, and Cooperman’s emotions appeared genuine. What’s more, he’s far from the only billionaire fretting about Warren’s candidacy in public. Talking to billionaires about their thoughts on her is all the rage at the moment.

Bill Gates at the New York Times DealBook conference on Wednesday said he wasn’t so sure about how “open-minded” Warren is or whether she would be willing to meet with him. He said he’s paid $10 billion in taxes but joked he would get a little hesitant about paying $100 billion in taxes after doing “a little math about what I have left over.” Gates wouldn’t have to pay $100 billion under the Massachusetts Democrat’s proposed wealth tax, but even if he did, he would still have more than $6 billion left. He also wouldn’t say whether he would support her over President Donald Trump.

Also this week, CNBC brought JPMorgan CEO Jamie Dimon on and asked him whether Warren was “anti-business,” to which he said he’s worried Warren uses some “pretty harsh words” and “vilifies successful people.” He continued, “I don’t like vilifying anybody. I think we should applaud successful people.”

At the rate we’re going, we’re just steps away from holding séances with the ghosts of John Rockefeller and Andrew Carnegie to ask them how they feel about Warren.

As Warren has risen in the polls in the Democratic primary, so has the number of Wall Street bigwigs and corporate executives speaking out against her. The senator has tried to emphasize that she doesn’t have a “beef with billionaires” but instead thinks that people who built their wealth in America and using American resources — infrastructure, workers, public services — should give a little back. But her rich detractors aren’t buying it.

“She’s not a serious person,” Cooperman told me in a phone interview on Wednesday evening. He later declared, “When I get through with her, it’ll cost her the election.”

Warren is a longtime critic of the financial industry. She’s running on a message of big structural change. If she’s elected, her first priority will be a sweeping anti-corruption package, and one of her most high-profile policy proposals is a plan to impose a wealth tax on those with fortunes of over $50 million. So it’s no surprise that some of the richest of the rich don’t like her (though plenty of the finance industry’s rank and file like her just fine). And she seems to relish their opposition. In other words, Warren versus rich guys isn’t going away anytime soon.

What this says about billionaires

In September, Cooperman told CNBC he thought the stock market would fall by 25 percent if Warren wins the presidency, if it opens at all, and the next month he said he believes the same thing would happen with a Bernie Sanders victory. (Sanders has also proposed a wealth tax.)

Fellow billionaire hedge funder Paul Tudor Jones reportedly recently echoed Cooperman’s 25 percent drop prediction if Warren wins in November 2020. And Steve Cohen, a billionaire whose former hedge fund paid $1.8 billion on criminal insider trading charges in 2013, warned the stock market would fall by 10 or 15 percent if Warren just gets the Democratic nomination. (Forecasters said Barack Obama and Donald Trump would tank the stock market before they were elected, too.)

Warren’s big-money critics tend to couch their arguments as generalized warnings against her — she’ll hurt the market, which is bad news for your 401(k); she’s got the wrong ideas about the economy; or she’s just not being very nice. But what they’re not saying is that they’ve got bigger stakes in this game than a correction in the S&P 500 or a social media spat. Guys like this can withstand a mean tweet from a senator. It’s the wealth tax that would wipe 2 percent off of their billions each year they’ve got a problem with.

“There’s no need for a wealth tax, it won’t work,” Cooperman told me. He said that there are “plenty of taxes” out there already and that if you want to tax the wealthy more, closing loopholes and changing tax rates is the way to do it.

Cooperman, 76, has been trading barbs with Warren for weeks. “I believe in a progressive income tax and the rich paying more. But this is the fucking American dream she is shitting on,” he told Politico’s Ben White in October.

The same month, he responded to one of Warren’s tweets taking a dig at him with a five-page letter to the senator criticizing her “soak-the-rich positions on taxes and economic policy” and claiming she had admonished him “as if a parent chiding an ungrateful child.” He pointed out he had signed the Giving Pledge — Gates’s and Warren Buffett’s initiative where the rich promise to give away their fortunes when they die — and said that his was a “classic American success story” — he is the son of Polish immigrants and grew up in the Bronx. He also listed off multiple other American success stories who have also given back, including the founders of Home Depot, former New York City Mayor Michael Bloomberg, and Facebook CEO Mark Zuckerberg. All of the figures he named are white men.

Cooperman, who wrote a similar letter to former President Barack Obama in 2011 criticizing him for his “divisive, polarizing tone,” told me he believes his letter to Warren was “very respectful,” unlike how he feels about her treatment of him — and rich people as a whole.

“The knocking of wealthy people is pandering to a different sector of the economy and misleading people,” he told me. He’s clearly irked by the back and forth. “She doesn’t know a goddamn thing about me,” he said.

What this says about Warren

The thing that happens when some billionaire comes out against Warren is that she takes advantage of it to further her message. Another rich guy opposes her candidacy? Okay, fine, that’s why you should vote for her, she says.

Sanders is doing the same thing. For example, he has for years been trading barbs with now-former Goldman Sachs CEO Lloyd Blankfein. This summer, his campaign rolled out an anti-endorsement list of rich and powerful people who oppose him, which includes both Dimon and Blankfein.

Among the Democratic electorate right now, it’s not good to be in tight with corporations and Wall Street. Instead, it’s a liability. Warren and Sanders are relying on small-dollar donors to fund their presidential campaigns and have sworn off high-dollar fundraisers and super PACs, in contrast to some of the candidates they’re out-raising, including former Vice President Joe Biden. So when billionaires go out to bash them, it doesn’t really hurt Warren or Sanders. It helps them.

That’s not to say this is all super healthy. Fear-mongering that Warren is an evil socialist coming to take away all your stuff plays to the people tuning into CNBC, whether from the trading floor at Citi or from a living room in Wisconsin. And Warren’s criticisms of powerful people she believes have done wrong can get heated. (See: her public grilling of the former Wells Fargo CEO.)

But these rich men aren’t used to being challenged, not by a democratic socialist from Vermont and not by a law professor who’s a woman.

What this says about us

One managing director and Warren supporter at a large private equity firm recently told me he believes some of her ultra-rich opponents are genuinely offended by the way she talks about them. “People feel like there was a set of rules that were put out there and they followed them,” he said. “They played the game that they were supposed to play and they got rich.”

That seems to be the case with Cooperman.

But that doesn’t mean the game is good, that we have to keep playing it, or that we shouldn’t talk about changing it so that more people can win. Income inequality has exploded and the wealth gap has expanded in the US in recent decades. That says something about our society at large, well beyond just the political discourse.

As my colleague Matt Yglesias recently pointed out, the fact that all of these billionaires voicing their personal opinions to the world in and of itself is a news story shows how disproportionately influential the rich are on American politics.

On Thursday, CNBC’s Scott Wapner tweeted at Warren asking whether she would meet with Cooperman and then challenged her to take part in a televised town hall with the investor about “capitalism, wealth, and how to improve the system.” It’s not as though Warren has a lot on her plate right now, running for president while also serving as a US senator, or other debates to attend. It’s also worth noting he’s not making the same request of a man. If you want to do Warren versus Cooperman live, why not do Sanders versus Blankfein, too?

A Little Formaldehyde With Your Milk?