Home Politics What happens to the thousands of early votes cast for candidates who... 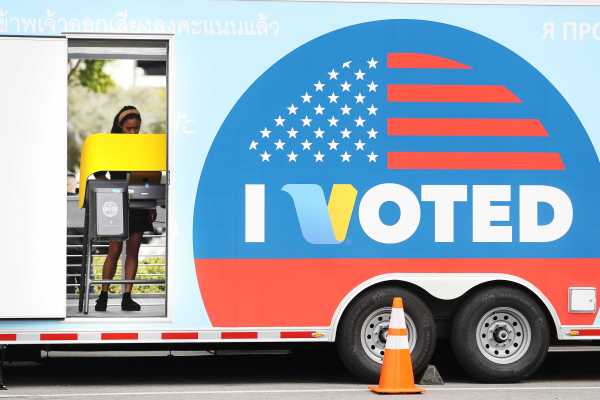 Hundreds of thousands of voters have already cast a ballot in absentee or early voting ahead of Super Tuesday, when 14 states and one territory will head to the polls to choose the Democratic nominee for president. But former South Bend, Indiana, Mayor Pete Buttigieg and Sen. Amy Klobuchar (D-MN) both dropped out of the race on Monday — which has raised questions over what happens to early voting or absentee ballots for candidates who have already dropped out.

With a very close primary race, every vote will be important, and none so more than those cast in Super Tuesday states, where about a third of all pledged convention delegates will be awarded. For voters who have already cast their ballots for Klobuchar, Buttigieg, or even billionaire Tom Steyer, who dropped out on Saturday, what happens to their ballot depends on which state you live in.

In reality, most states do not allow a vote to be changed once it is cast.

California will award a total of 415 delegates for candidates. With so many delegates in play, every vote matters in the state. There is no provision under state law by which voters can change their already-cast votes, and attempting to vote again on Election Day would be illegal. A lot of wasted ballots on candidates who have already dropped out could make a massive difference in the delegate race, especially if one or two contenders fall just short of the 15 percent viability threshold.

California has increasingly encouraged mail-in ballots, a system which has been shown to boost voter turnout, but could also delay vote counting for days or even weeks. Voters in the state have until midnight on election day to mail in their ballots, as long as it is postmarked on or before election day.

In the 2018 midterm statewide primaries, 67 percent of all votes cast in California were done so by mail. A large percentage of ballots have already been cast in the state’s primary race, according to a Los Angeles Times report:

There’s no telling how many early votes have been cast for one of the dropped-out candidates, but in some cases, those votes will be counted anyway. In Texas, where over a million early votes have already been cast between the Democratic and Republican primaries, state officials reiterated Monday that once votes are cast, they cannot be changed. Further, candidates who were already on the ballot in Texas cannot be removed after the state’s withdrawal date, which was December 19 last year.

That means that any vote cast for Pete Buttigieg, for example, will still count and if the candidate reaches the 15 percent viability threshold in the state, he will still be awarded delegates even though he is no longer in the race.

While states like Texas will go ahead and count early votes toward dropped out candidates, some states do have a process in place to change already-cast early votes.

In Michigan, which is not a Super Tuesday state, but holds its primary on March 10, you can choose to “spoil” your ballot and cast a new one for a candidate who still remains in the race. To do so, you have to request a new ballot be mailed to you by the Saturday before the election, or you can request a new ballot in person until the Monday before election day. There are no provisions to spoil a ballot on Election Day.

A cleaner solution to this problem would be ranked-choice voting, which is in use in four primary states and was used for early voting in the Nevada caucuses. However, none of the Super Tuesday states use it. Under a ranked-choice voting system, voters list their candidates in order of preference. So a Klobuchar voter could list their preferred candidate first, but could rank Joe Biden, Elizabeth Warren, Mike Bloomberg, or Bernie Sanders in the order of their preference.

With Klobuchar now out of the race, that vote would be given to the voter’s second choice in a second round of ballot counting so that it doesn’t go to waste. Maine will become the first state to use ranked-choice voting in a presidential election this fall after a law passed last year by the state legislature. Originally, the state was supposed to use ranked-choice voting for its Super Tuesday presidential primary as well, but Democratic Gov. Janet Mills chose to delay implementation until after the primary.

A voter’s preferred candidate dropping out before Election Day is an inherent risk that comes along with voting early or in absentee voting, and there’s a reason why Klobuchar and Buttigieg suddenly dropped out of the race: Neither of them was likely to receive enough delegates on Super Tuesday to have a path to the nomination.

The Democratic freakout over the Electoral College, explained

These immigrants contribute $4.6 billion in taxes. Trump’s trying to strip...