Home Politics What the right fears about Warren’s wealth tax 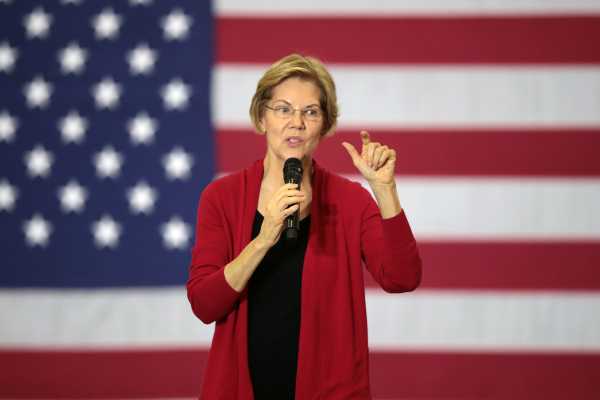 The angry conservative reaction to Sen. Elizabeth Warren’s tax proposals is quite revealing. They expose a particular intellectual tendency, one that goes beyond merely opposing higher taxes into a more fundamental defense of the American model of political economy. It’s a sense that the basic contours of America’s system, despite yawning inequality and the undeniably outsized influence of the rich over politics, is fundamentally just — and that the attempts to reform it are illegitimate efforts to impose tyrannical forms of majority rule.

One of the most interesting expressions of this view came from Michael Strain, the director of economic policy studies at the center-right American Enterprise Institute. Strain has a reputation as a thoughtful policy type; he recently wrote a Bloomberg column arguing that Warren’s proposal to tax fortunes above $50 million likely would not raise as much revenue as her campaign says it would. (Sen. Bernie Sanders has also proposed a wealth tax.)

But his opposition to Warren’s wealth tax is actually much deeper: He argues that it wouldn’t just be ineffective for Warren to tax the wealth of the super-rich, but morally wrong.

“Warren’s tax could cut roughly in half the fortunes of the very wealthy over its first 10 years. The aggressiveness of her plan should not be understated,” he wrote as part of a series of tweets on Tuesday. “All Americans deserve protection from the tyranny of the majority, including the very rich.”

To me, this seems like rhetoric the Warren campaign might want to use in a primary ad. Here’s a conservative economist validating the claim that her plan could seriously reduce inequality in the United States, and then bemoan the alleged harms done to billionaires to boot.

I emailed Strain to ask for some more clarity on the thinking behind his tweets, and then we ended up talking on the phone for about half an hour. Strain dislikes Warren’s proposal for all sorts of reasons, including that he thinks it will increase tax avoidance and his general skepticism of the idea that inequality is as big a problem as liberals say it is.

But even if Team Warren was right about the facts on the wealth tax, he argues it would be wrong to impose it. Citing comments by two Berkeley economists who helped develop Warren’s plan, Strain argues that the real purpose of the tax is not merely raising revenue but rather punishing the rich — taking their money to reduce inequality and to head off the alleged threat to democracy posed by high concentrations of wealth.

This, he argues, is an illegitimate use of the tax code. The tax system is in his view designed for raising revenue to pay for necessary state functions. Using it to hurt a particular socio-economic class, even for theoretically laudable aims like protecting democracy, is in his mind a form of majoritarian oppression.

“We have to hold in tension the imperatives of a democratic majority with the right of the minority not to be subject to the tyranny of the minority,” he says. “No group of Americans should be treated as a tool to raise the welfare of the rest of society. … There’d be a whole lot more agreement that we shouldn’t do that that if we were doing it to other groups, and we shouldn’t do it to the rich.”

There’s a lot one could take issue with in these comments; for one thing, it’s conceptually tricky to square with his stated support for progressive income taxation and the earned income tax credit. But I’m particularly interested in the way that Strain treats the rich as a kind of vulnerable minority, one in need of protection from a rapacious majority (in his Bloomberg column, he refers to Warren’s proposal as the “tax-code equivalent of looting mansions.”)

To my mind, Warren’s wealth tax is justifiable precisely because it weakens the power of a particular minority. In the recent book Billionaires and Stealth Politics, political scientists Benjamin Page, Jason Seawright, and Matthew Lacombe find that the 100 wealthiest Americans frequently engage in campaigns of political influence, most typically to reduce taxes and social safety net programs, and do so in a fashion that largely avoids public debate about their actions.

“Most US billionaires have given large amounts money — and many have engaged in intense activity — to advance unpopular, inequality-exacerbating, highly conservative economic policies,” the authors write in a summary of their findings at the Guardian. “They have done so very quietly, saying little or nothing in public about what they are doing or why. They have avoided political accountability. We believe that this sort of stealth politics is harmful to democracy.”

The extreme concentration of income in the hands of a few people gives them outsized ability to shape political discourse through campaign contributions, super PACs, setting up ideologically friendly political nonprofits, and the like. But simply regulating these forms of buying influence isn’t enough; it’s often easy for the super-rich to get around regulations designed to keep their dollars out of politics. The billionaire penchant for stealth politics suggests a more radical conclusion may be necessary.

The very fact of extreme inequality threatens what political philosopher John Rawls calls “the fair value of the political liberties:” the idea that political freedoms like freedom of speech and association should be available to all citizens in roughly equal fashion, that everyone should be able to have a reasonable chance for their voices in democratic political deliberation. In order to prevent families like the Kochs, Mercers, and Adelsons from distorting our politics, we need to redistribute a significant chunk (though not nearly all) of their fortunes. 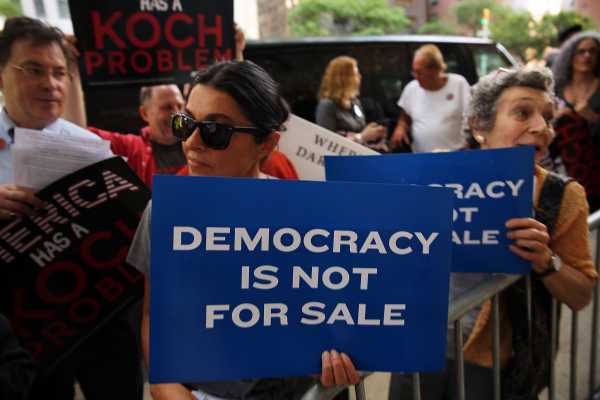 The problem of majorities running roughshod over minorities is of course a serious one for democracies — see pretty much all of American history on race and racism. But merely because a group is a numerical minority doesn’t mean that it’s a marginalized, put-upon group on which majorities can make no just claims. In the case of taxing the wealthy, it seems clear that the issue isn’t tyranny of the majority, but rather a tyranny of the minority. A powerful few are using their resources to reshape public policy in line with their (unpopular but self-serving) ideals without sufficient public deliberation. Strain sees the rich as the victims in this conversation; I see them as the villains.

A similar debate plays out again and again in big-picture discussions about political and economic institutions.

Take the Electoral College and the Senate. Liberals frequently critique both the electoral college and the Senate as undemocratic: a means of disempowering the country’s more diverse urban and suburban majority while giving undue weight to the voices of a rural, heavily white minority. Conservatives, by contrast, defend both institutions as vital means of protecting small states and rural Americans who would otherwise be further marginalized by the political system. It’s clear that both the Electoral College and the Senate are counter-majoritarian institutions; the debate is over whether that’s bad (a form of minority rule) or good (a vital protection against tyranny of the majority).

This debate reflects partisan interests, of course. But I think it also reflects sincerely held beliefs: substantive disagreements about where America is as a country — about who wields power and whose rights are most acutely threatened.

The American left looks sees their country as a place with a dangerously undemocratic political system, one that overweights the voices of the country’s historically privileged white Christian population while further marginalizing the historically marginalized. This unfair system would be easier to reform were it not for a handful of super-rich who not only are hoarding resources, but using them to reshape policy and build alliances with reactionary leaders like Trump furious about social change. Radical reform is necessary, on this view, because the status quo makes a mockery of democracy — in a way that will likely get worse as the country’s population gets younger and browner.

Conservatives, by contrast, see a left ascendant in the halls of cultural power — universities, Hollywood, and even increasingly the corporate world. The dominance of aggressively “woke” politics will invariably lead to overreach, they argue, and to to policy backlash against culturally conservative rural Americans and churches. Conservatives disagree among themselves about to the extent to which economic inequality is a problem, but they largely agree that left-wing solutions to problem risk turning the state into a socialist oppressor. Liberals claim to be standing for democracy, they think, but they are in their hearts authoritarian.

“These candidates are pledging to remake America entirely. Rip out the old, which is. they’re telling us, irredeemably tainted by racism, sexism and free enterprise, and replace it with something completely new and different,” as Fox host Tucker Carlson put it in a mid-October op-ed about the 2020 field. “Warren has seen the future, and in that future, she has complete and unquestioned control of America.”

I think these competing ideological visions of our country, or something like them, are lurking in the background of a lot of our political debates, explaining seemingly radical divergences in how assess individual policy proposals. It helps makes sense of Strain’s moral objection to Warren’s wealth tax — a view that strikes me as largely wrongheaded, but makes sense under a set of very particular ideological assumptions.

US Spy Planes Fly Close to Shanghai, Fujian as Another Possibly...