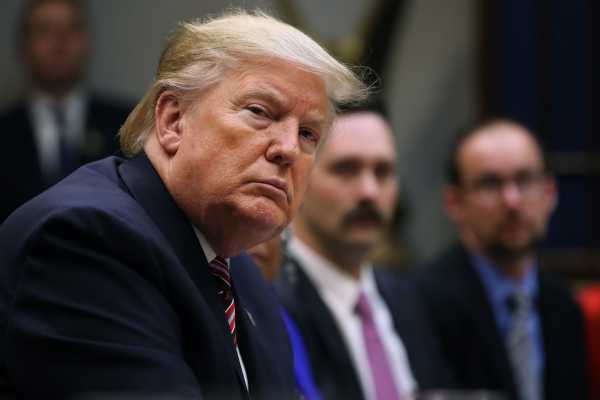 The White House indicated Friday that it does not intend to mount a defense in the ongoing impeachment hearings into President Donald Trump. White House counsel Pat Cipollone made the announcement in a letter to House Judiciary Committee chairman Rep. Jerry Nadler (D-NY) Friday, in which he called the proceedings “completely baseless.”

The letter clarifies some uncertainty created by a previous missive Cipollone sent to the Judiciary Committee in which he refused to make clear whether Trump would participate in upcoming hearings.

Nadler had encouraged Trump and the White House to participate in the process, promising the executive branch in a November 26 letter that all hearings would be “fair and informative.” While Trump has occasionally signaled openness to participating in the hearings, he has more often attacked them and their legitimacy, making the White House’s decision not to partake in the process largely in keeping with its impeachment strategy thus far.

“Your impeachment inquiry is completely baseless and has violated basic principles of due process and fundamental fairness,” reads Cipollone’s Friday letter. “House Democrats have wasted enough of America’s time with this charade. You should end this inquiry now and not waste even more time with additional hearings.”

There will, however, be additional hearings, with the next session scheduled for Monday, and the absence of Trump and his legal advisors will leave his defense in the hands of his Republican allies on the Judiciary Committee.

Trump’s decision not to defend himself in House impeachment inquiry breaks with precedents established in both the Nixon and Clinton administrations, both of which sent White House counsel to question witnesses and present a legal defense. But according to a Friday letter to Nadler, House Republicans appear ready to fill this role.

Chalupa, in particular, has become a person of interest to Republicans given she is a figure in a debunked conspiracy theory that it was Ukraine, not Russia, which interfered in the 2016 election.

Democrats on the House Intelligence Committee refused to call all of the witnesses requested in Collins’s letter when Republicans on that committee asked for them to be brought forward during Intelligence impeachment hearings. The Judiciary Committee is likely to do the same.

The president himself implied he would prefer quickly proceeding to a Senate trial in a tweet Thursday, writing, “If you are going to impeach me, do it now, fast, so we can have a fair trial in the Senate, and so that our Country can get back to business,” and House Democrats have signaled they would like to soon move to the trial as well: If Pelosi can get to a House vote on articles of impeachment by December 20, the last legislative workday of the year, the Senate trial would presumably start in early in January.

What’s next in the impeachment inquiry

Democrats are getting closer to holding a vote on articles of impeachment, but aren’t there quite yet.

Following a series of House Intelligence Committee hearings held throughout the month of November, a report on its findings was advanced out of committee on a party line vote Tuesday and sent to Nadler’s Judiciary Committee for review.

On Wednesday, the Judiciary Committee took over the inquiry, calling several constitutional law experts to establish what constitutes an impeachable offense. It’s now up to Nadler’s committee to decide whether to draft articles of impeachment. Once those are drafted, the process, as explained by Vox’s Ella Nilsen, Li Zhou, and Matt Yglesias, would be:

From there, a trial would be held in the Senate with Chief Justice John Roberts presiding as judge.

Trump seems to hope that trial is close at hand, and Democrats took another major step towards it on Thursday when Speaker Nancy Pelosi announced that she asked senior House Democrats to begin drafting articles of impeachment.

Earlier this week, NBC’s Heidi Przybyla reported that the Judiciary Committee is considering at least the following:

That plan would fit previous precedent for articles of impeachment, as Vox’s Andrew Prokop explained:

Exactly when those articles will be written is not yet clear; lawmakers have two weeks left of legislating before a winter break, meaning they could come as early as next week. On Monday, the Judiciary Committee will continue its hearings with a session featuring legal counsels from both the Judiciary and Intelligence Committees.

UK Lawmaker Calls on Moscow, London to Get Beyond Mutual Recrimination