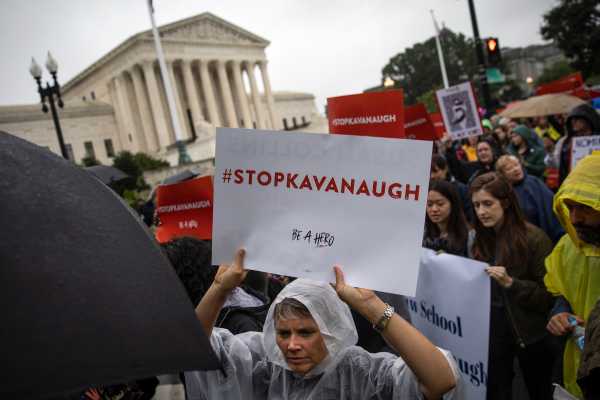 “The vast majority of the time I spent in high school was studying or focused on sports and being a good friend to the boys and the girls that I was friends with,” Supreme Court nominee Brett Kavanaugh said in a Fox News interview on Monday night.

But his page in the Georgetown Preparatory School yearbook appears to tell a different story. As Kate Kelly and David Enrich reported at the New York Times on Monday, among apparent references to drinking and partying, the page includes the phrase “Renate Alumnius,” a reference to Renate Schroeder (now Renate Schroeder Dolphin), a student at a neighboring girls’ school.

Dolphin’s first name appears repeatedly throughout the yearbook, including below a photo of nine football players, one of them Kavanaugh, who describe themselves as “Renate Alumni.”

A lawyer for Kavanaugh says “Renate Alumnius” is merely a reference to the fact that the two students “attended one high school event together and shared a brief kiss good night following that event.” But others say the “Renate Alumni” jokes were part of a demeaning pattern in which boys bragged about having sex with Dolphin.

“The insinuation is horrible, hurtful and simply untrue,” Dolphin said in a statement to the Times. “I pray their daughters are never treated this way.”

She also said she did not kiss Kavanaugh. “I never kissed him,” she told the Times through a lawyer.

Kavanaugh’s high school yearbook takes on importance now, 35 years after he graduated in 1983, because psychology professor Christine Blasey Ford says he sexually assaulted her when they were both in high school, and another woman, Deborah Ramirez, says he thrust his genitals in her face without her consent not long after, when they were students at Yale. Kavanaugh has denied both allegations and, on Monday, told Fox’s Martha MacCallum, “I’ve always treated women with dignity and respect.”

The contents of his yearbook page cast doubt on that claim.

More broadly, at least according to several Georgetown Prep students, the “Renate Alumni” references are part of a larger social pattern in which men build themselves up by bragging about sex with women, without regard for the feelings or desires of the women involved. President Trump has been caught on tape doing much the same thing, bragging about his ability to grab women’s genitals.

Kavanaugh’s confirmation process has brought to the surface many of the problems we struggle with as a society when it comes to discussing sexuality and sexual misconduct. His yearbook page brings up another one: the idea that women are objects for men’s amusement, their sexuality something for men to joke about with their friends.

In his Fox News interview, Kavanaugh characterized his high school self as wholesome and pious, a good friend to men and women alike. “I was focused on academics and athletics, going to church every Sunday at Little Flower, working on my service projects, and friendship, friendship with my fellow classmates and friendship with girls from the local all-girls Catholic schools,” he said.

But according to several people who spoke with the Times, he and his friends didn’t always treat girls as equals. Kavanaugh and the other football players “were very disrespectful, at least verbally, with Renate,” said Sean Hagan, who attended Georgetown Prep at the time. He and another former student, who asked to remain anonymous, said the boys bragged about sex with Dolphin.

One former student, Michael Walsh, included the phrase “Renate Alumnus” on his page along with a poem: “You need a date / and it’s getting late / so don’t hesitate / to call Renate.”

Four of the players with Kavanaugh in the “Renate Alumni” photo issued a statement saying that they had “never bragged about” sex with Dolphin and that the “Renate” references “were intended to allude to innocent dates or dance partners and were generally known within the community of people involved for over 35 years.”

“These comments were never controversial and did not impact ongoing relationships until The Times twisted and forced an untrue narrative,” the statement added.

But a person familiar with Dolphin’s thinking told the Times that she was aware of the poem about her in high school, found it offensive, and asked the football players to stop reciting it. Dolphin had signed a letter, along with 64 other women, after Ford’s allegations became public, saying that Kavanaugh always “treated women with respect.” But she was not aware when she signed it that her name appeared on Kavanaugh’s yearbook page, she told the Times.

The references to Dolphin in Kavanaugh’s yearbook have parallels in the allegations made by Deborah Ramirez. She says that during a drinking game at a party, Kavanaugh put his penis in her face while other students watched. “I was embarrassed and ashamed and humiliated,” she told Ronan Farrow and Jane Mayer at the New Yorker.

A former Yale classmate described Ramirez to the New Yorker as “a vulnerable outsider,” and said, “Is it believable that she was alone with a wolfy group of guys who thought it was funny to sexually torment a girl like Debbie? Yeah, definitely. Is it believable that Kavanaugh was one of them? Yes.”

The “Renate Alumni” jokes appear to support this description of Kavanaugh — not as someone who always treated women with respect, but as someone who thought it was funny to sexually humiliate them. The references lend credibility to Ramirez’s account and cast doubt on Kavanaugh’s claims about his high school self, thereby casting doubt, in turn, on his denials of the sexual misconduct allegations against him.

The “Renate Alumni” references are part of a bigger problem

Kavanaugh was not alone in making references to “Renate” on his page. Bill Barbot, a former Georgetown Prep student, told the Times that Kavanaugh was part of the school’s “fratty” culture, in which boasts about sexual conquests were commonplace. Some of the boasts may have been baseless, according to another former student, William Fishburne, who said that when it came to sex, students at the school “would claim things they hadn’t done to sort of seem bigger than they were, older than they were.”

It’s also not clear to what degree school officials understood or condoned the “Renate” references. According to the Times, a faculty adviser reviewed the yearbook. A spokesperson for Georgetown Prep declined to comment further to Vox, but pointed to a letter to the school community posted on the school’s website from its president, Rev. James R. Van Dyke.

“It is a time for us to continue to evaluate our school culture, as we do each day, and to think deeply and long about what it means to be ‘men for others,’ what the vaunted Prep ‘brotherhood’ is really about,” Van Dyke writes. “It is a time to continue our ongoing work with the guys on developing a proper sense of self and a healthy understanding of masculinity, in contrast to many of the cultural models and caricatures that they see.”

He is right that American culture offers many negative models of masculinity — the kind of sexualized boasting Kavanaugh is accused of is far from unique to Georgetown Prep, or to 1983. Rather, it remains commonplace for men to brag about sex with women, without regard for what the women themselves may want.

“I just start kissing them,” Trump said on the infamous Access Hollywood tape, recorded in 2005. “It’s like a magnet. Just kiss. I don’t even wait.”

“When you’re a star, they let you do it,” he added, as Billy Bush laughed. “Grab ’em by the pussy. You can do anything.”

Despite an uproar when it was released in October 2016, the tape didn’t stop Trump from becoming president. The message: Making your friends laugh by bragging about kissing and touching women, apparently without asking permission, is completely acceptable in America today.

This message has an effect on young people. “Girls my age are watching, reading, and hearing these conversations,” Columbia University freshman Elizabeth Love wrote at Vox of the discussions around the Kavanaugh allegations. “We’re each scared that the national conversation around Kavanaugh gives entitled young men today the green light to be abusive without worrying that it could affect their future ambitions. We don’t understand how, in the midst of the #MeToo movement, people could be so dismissive of such serious accusations.”

Meanwhile, 76 percent of girls ages 14 to 19 feel unsafe at least once in a while, according to a recent survey by Plan International USA. Seventy-two percent say they feel treated with less respect at least some of the time because of their gender. And 41 percent of boys say society expects them to be aggressive and violent when they get angry.

At this point, Kavanaugh’s confirmation is not just about Kavanaugh. It’s also about a culture in which men can treat women like objects for their own amusement and face no consequences for their actions. Kavanaugh swears he is not a product of such a culture — but, increasingly, the accounts of others tell a different story. When he and Christine Ford testify before the Senate on Thursday, the American people can decide whom to believe.